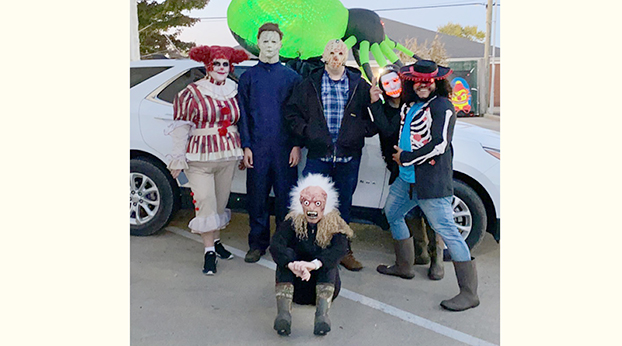 These scary characters will be on hand during the Suds and Screams charity haunted car wash this Saturday night, and next Friday and Saturday from 6 to 9 p.m. at Express Car Wash. For every $15 car wash purchased, the business is giving $5 to local organizations who will also be at the event handing out suckers and stickers. (Photo submitted)

A haunted car wash, where Freddy Krueger and Michael Myers may peer through your soapy windows and other creepy characters will set an eerie mood, is helping several local organizations raise money for their causes.

Ginny Hogue, owner of Express Car Wash on the Danville bypass said during the pandemic many worthwhile organizations haven’t been able to hold their normal fundraising events. So the Suds and Screams haunted car wash is one way that they can have fun and raise much needed funds, she said. 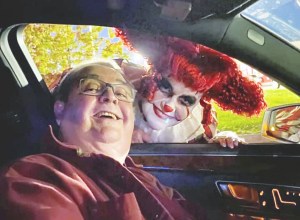 Michael Luster is all smiles as the character Pennywise (Ginny Hogue) peeks inside. Luster’s two sons also work at Express Car Wash and are characters at the Suds and Screams charity haunted car wash. (Photo submitted)

Suds and Screams haunted car wash began on Friday and Saturday, Oct. 16 and 17. And it will continue on Saturday nights through Halloween between 6 and 9 p.m.

During Suds and Screams, car wash employees will be in costumes and will work in the “tunnel” soaping up tires, windshields and hoods, Hogue said. And groups who are there to raise money will be dressed in spooky costumes outside of the car wash handing out suckers and stickers, and having fun, Hogue said.

For every $15 car wash, the business is donating $5 to the organization.

“I’m really happy how groups are making money,” she said.

Boy Scout Troop 27 isn’t having its traditional fundraising popcorn sale this year because of COVID-19 restrictions. But when the Scouts worked this past Saturday at Suds and Screams, they brought in $400 in three hours, Hogue said.

People are also leaving tips for the organizations, she added.

In the automated haunted car wash, bright lights inside the tunnel are turned off and it’s lit with black lights and strobe lights. Misty fog is pumped in, “blood” is dripping down the walls and scary music is playing.

Hogue, who dresses as the character Pennywise, said the employees love working at the haunted car wash. They’re dressed as scary characters and will tap on windows and appear when those riding in the car through the wash least expect them. “But they’re not going to reach in and touch you. It’s all in good spirits,” she said.

One of the most popular characters is Michael Myers. “He’s tall and he’s quiet. He never gets out of character,” Hogue said. Recently a mother and daughter was about to drive through Suds and Screams and Michael Myers got into the backseat. The daughter wouldn’t look up because she’s afraid of the character, “But her mom was loving it.”

The Hustonville Haunted House has even lent some props for the event, she said.

And probably next week Leatherface from the movie Texas Chainsaw Massacre will make an appearance with a chainsaw, she said.

The haunted car wash is “family friendly” but if someone in the car is too afraid, they will be left alone, she added.

Hogue said, for $15 you’ll be donating to a good cause, you’ll leave with a clean car “and you get scared. It’s just a lot of fun.”

Why all the talk about Marsy’s Law?