Why all the talk about Marsy’s Law? 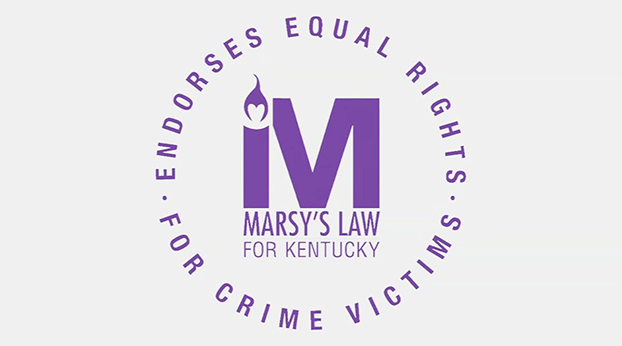 What it means if voters say ‘yes’ to adding another crime victims’ bill of rights, changing the Kentucky Constitution

As voters take to the polls early this year in an effort to combat the spread of COVID-19, they will find more than candidates to make a selection on their ballot. And one of those questions — about whether to pass Marsy’s Law or not — has been particularly confusing for voters, partly because it was already voted on back in 2018.

Another part of the confusion is that organizations like the American Civil Liberties Union (ACLU) are adamantly opposed to the amendment. They say many are afraid of publicly scrutinizing Marsy’s Law due to perceptions that they are against victims’ rights — but that this could not be further from the truth.

They say this amendment could change the structure of our justice system — where we are considered innocent before proven guilty, and that it uses inconsistent and confusing language that contradicts Kentuckians’ constitutional rights, and will create significant unintended consequences.

There are actually two constitutional amendment questions voters will answer, or already have as the polls opened on Oct. 13. Early voting is offered this year through Nov. 2, the day before Election Day, to give those concerned with contracting or spreading the coronavirus a chance to avoid crowds.

Constitutional Amendment 2 asks voters to decide whether or not to extend judicial terms from four to eight years for both commonwealth’s attorneys and district judges. It also adds a caveat, requiring district judges to have eight years of legal experience before being able to sit at the bench; the requirement is now two years.

But Amendment 1 — Marsy’s Law Crime Victims’ Bill of Rights — has been the most controversial.

In 2018, Kentucky voters approved the Marsy’s Law amendment with 63% of the vote. But the Kentucky Association of Criminal Defense Lawyers (KACDL) filed litigation against the board of elections the same year.

KACDL said the ballot question — written by the state legislature — failed to inform voters “of the substance of the amendment,” and that it should be blocked. The ballot only contained one sentence describing it.

A unanimous decision by the Kentucky Supreme Court in June of 2019 invalidated the amendment, agreeing that the ballot description was insufficient.

The ruling stated, “We hold that Section 256 of the Kentucky Constitution requires the General Assembly to submit the full text of a proposed constitutional amendment to the electorate for a vote,” and voided the amendment. In response to the court’s ruling, the Kentucky State Legislature required that the ballot question and the full text of the 2020 amendment be printed on ballots.

The measure provides crime victims with specific constitutional rights, like being “treated with fairness and due consideration” for their safety, to be present at trials and able to consult with state’s attorneys.

But, opponents to Marsy’s Law say that the state has had a statute called the Kentucky Crime Victim Bill of Rights (CVBR), and that if the laws we have in place aren’t serving our victims, we should amend them — not change the Kentucky Constitution.

Most of what’s listed in Marsy’s Law is also within the existing CVBR. The existing law provides statutory rights to victims, including right to information on compensation, treatment programs, their participation in the criminal justice process, information on the arrest of the accused and how to register for notifications on the accused’s status. It also gives victims rights to information on how they can be protected from intimidation, harassment and retaliation, and to prompt updates on judicial proceedings, as well as the right to submit a victim impact statement to the court.

Opposition to the amendment by KACDL includes its feeling that the existing CVBR statute already provides protection, and that identifying “a crime victim” on the onset of court proceedings goes against the very thing the justice system is set up around — the presumption of innocence before being proven guilty.

What Marsy’s Law formula does include is the rights to restitution, reasonable protection and to refuse depositions and discovery requests, all against the defendant. Opposing groups say that these rights do nothing to check the power of government.

The Kentucky ACLU says “Marsy’s Law is bad for victims and wrong for Kentucky,” and urges voters to vote “no.” It says that the bill promises to amend the state’s constitution to create an “entirely new set of ‘rights’ and standing for victims of survivors of alleged criminal activity.”

The ACLU says there are real financial concerns to Marsy’s Law, which creates the need for substantial additional resources but does not allocate any. Similar legislation in North Dakota, which has less than a quarter of Kentucky’s population, is estimated to cost $2 million per year, which in North Carolina, Marsy’s Law is estimated to cost $16.4 million to implement, and $30.5 million annually after.

Kentucky’s amendment does not include a fiscal note or any cost estimates.

Kentucky’s ACLU says on its web page, “Marsy’s Law provides no guidance to lawmakers or judges on how to prevent violations of the rights guaranteed to all people by the U.S. Constitution.”

The ACLU also says that many are afraid to publicly state anything against Marsy’s Law, out of fear of the perception of being against victims’ rights. “This could not be further from the truth,” it says. “This amendment will be bad for our criminal justice system. It will inhibit the ability to get to the truth. Its effect will be to further burden, muddy and confuse an already overwhelmed system, which will hurt victims and defendants alike.”

Amendment 2 — or the Terms of Judicial Offices Amendment — if passed, will increase the office terms of commonwealth’s attorneys from six to eight years, beginning in 2030.

It will also increase the office terms of district judges from four to eight years, starting in 2022. It would also require district judges to have at least eight years of legal experience — currently, the requirement is two years.

District court is where lower-level cases, such as misdemeanors and some lawsuits are heard.

According to Ballotpedia, a non-profit and non-partisan digital encyclopedia of American politics, Rep. Nemes said if commonwealth’s attorneys “are at six years, and the circuit judges are at eight-year terms, it makes re-circulating very difficult.” He said this amendment would “align the district judges’ terms with all the other judges,” as well as increasing the qualifications and “professionalism of the judiciary.”

Fourteen Republican legislators voted against the bill, with seven who did not vote, along with 16 Democratic legislators not voting, either. Republican Senator Wil Schroder voted against it, saying he supported the increase in legal experience for district judges, but that eight-year terms are “really long for any judge,” and any elected official in Kentucky.