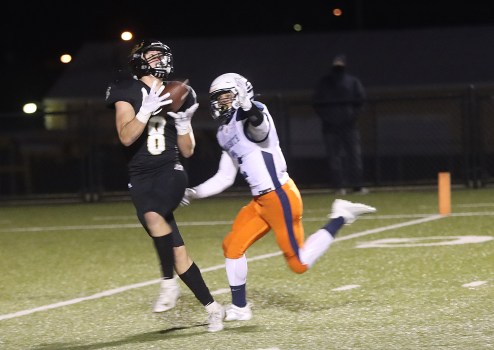 Luke Sheperson of Boyle County pulls in a pass in front of Madison Southern defender Jayshaun Ethridge near the goal line during the first quarter Friday. Sheperson scored on the 44-yard pass from Jagger Gillis. - Photo by Mike Marsee 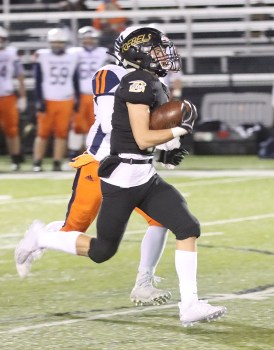 Hayden Kelley of Boyle County outruns Madison Southern’s Clay Bunch on his way to the end zone as he scores on a 90-yard kickoff return during the third quarter Friday. - Photo by Mike Marsee 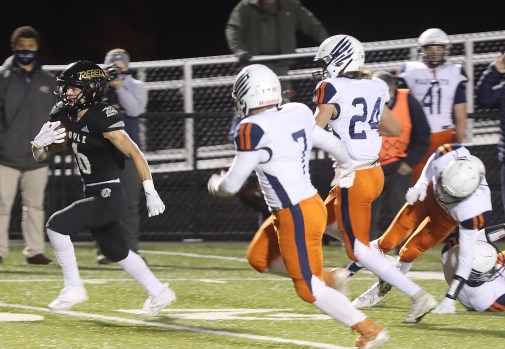 Cole Lanter (6) of Boyle County slips through the Madison Southern defense on his way to the end zone on a 30-yard scoring play during the first quarter Friday. It was the first of three touchdown receptions for Lanter. - Photo by Mike Marsee 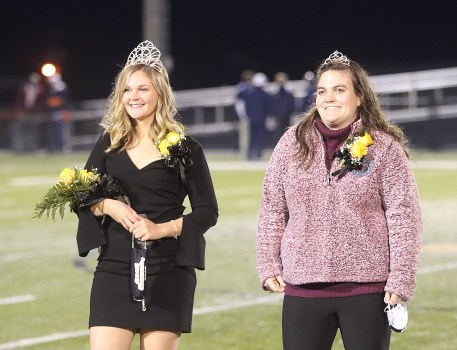 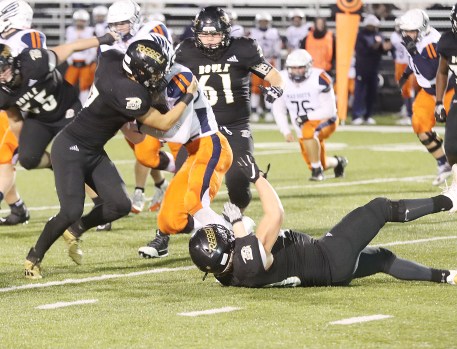 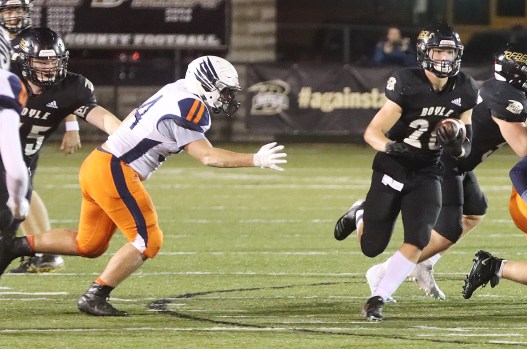 Will McDaniel (20) of Boyle County runs through a hole in the Madison Southern defense as teammate Cole Lanter (6) prepares to block for him during the second quarter Friday. McDaniel gained 21 yards on the play, and he rushed for 112 yards and two touchdowns. - Photo by Mike Marsee 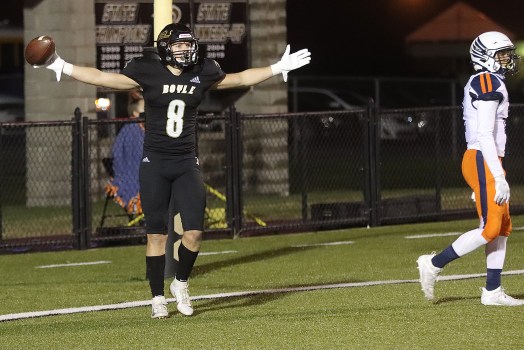 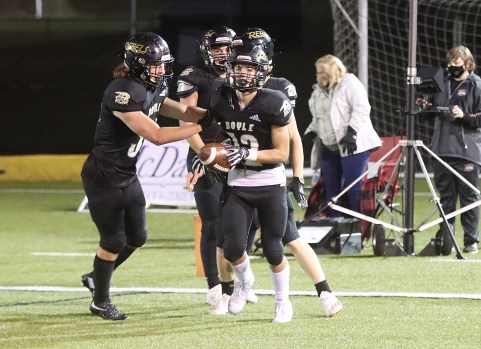 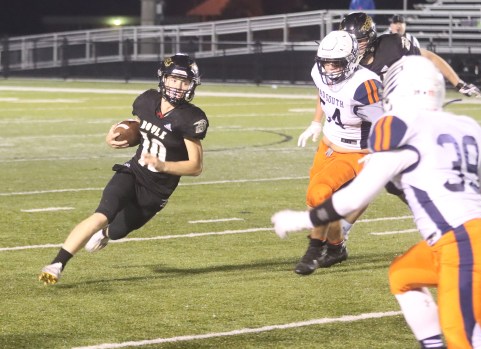 Avery Bodner of Boyle County turns the corner on a rushing attempt during the third quarter Friday. - Photo by Mike Marsee

The concept of playing with a sense of urgency has taken on a new meaning this season, and Boyle County took it to a new level Friday night.

The Rebels’ efficiency in their opening drive against Madison Southern was a clear indication that they’ve been paying attention when Boyle coach Justin Haddix has stressed the importance of making the most of every opportunity during this shortened season.

They ran their hurry-up offense with a combination of speed and skill not seen previously, slicing through the Southern defense in a seven-play, 61-yard drive that launched a 53-7 victory at Rebel Stadium.

Haddix said in so doing, they displayed a level of intensity that is more essential than ever as they play through a pandemic.

“This year more than any other, you don’t know how many plays you’re going to have,” Haddix said. “They’ve already had games taken, they’ve had (other things) taken, so they’ve got to make the most of every rep, and that’s what we’ve tried to preach to them.”

Dozens of games across Kentucky have been canceled or postponed over the past two weeks, and Boyle was affected for the first time this season when its Oct. 23 game at Bourbon County was called off the day before.

And in the Rebels’ most recent game, the first-team offense was on the field for only 16 plays in a 54-0 win over Anderson County.

So to say that unit was raring to go Friday would be putting it mildly.

Boyle (6-0) delivered an early knockout punch with 2 minutes, 18 seconds of foot-on-the-gas football in which they were ready to snap the ball almost as soon as the umpire spotted it.

“It was them just wanting to get out there and get going,” Haddix said.

It also was a manifestation of their desire to snap the ball within 15 seconds in a frenetic scheme designed to keep opposing defenses off balance.

“That’s definitely something we’ve been trying to get better at,” Boyle wide receiver Cole Lanter said. “We knew Madison Southern was really good, so we tried to come out as quick and as hard as possible. We wanted to get things rolling right off the bat, so we practiced it all week and we just went out there and executed.”

Here’s a breakdown of the drive:

Lanter said it’s an “amazing” feeling when the offense is performing that well at that pace.

“It makes you feel like you’re in control of the game,” said Lanter, who caught three touchdown passes later in the first half. “All 11 players, it makes us feel like we’re a unit, we’re a team and we’re all just moving together. It’s really awesome.”

Boyle has been running a hurry-up offense all season long, and Haddix said the Rebels have been trying to get better at it since week one.

“But it takes a lot of things. We’ve got a group that does signaling, and (it takes) the guys learning and going fast and hurrying up,” he said. “That keeps our pace going, and that’s what we want to do.”

They rolled up 332 yards in the first two periods on just 26 plays, and they went on to break 50 points for the fourth time in six games.

Lanter scored three times in the final 13:45 of the first half on pass plays of 30, 20 and 31 yards — his only three receptions of the game — giving him eight of the team’s 18 touchdown catches this season and giving Boyle a 43-0 halftime lead.

He hit Sheperson in stride near the goal line with a beautiful deep ball for a 44-yard score when Boyle got the ball back less than a minute after its first score.

Just over three minutes after that score, McDaniel scored for the second time on a 15-yard run to make it 21-0. McDaniel rushed for 112 yards on 11 carries.

And the Rebels’ defense wasted no time in getting the ball back to the offense. Southern (3-3) went three-and-out on its first six possessions, netting only 4 yards in the first half.

The Eagles scored in the third quarter after Alex Buttry recovered a fumble and returned it to the Boyle 8-yard line, but they finished with only 55 yards.

“Our defense has played great all year,” Haddix said. “That’s the constant and it’s always got to be. I’m very, very proud of our group.”

Awesome with a capital ‘A:’ A recorded message from ESPN college basketball analyst Dick Vitale was played during a pregame ceremony in which Boyle’s 13 seniors were recognized prior to their final regular-season home game. Vitale congratulated the Rebels on their success so far this season, wished the seniors well and encouraged the players to pursue their dreams with passion.

Vitale also praised the work of Jennifer Heist, who aided the Boyle players’ fundraising efforts for the Epilepsy Foundation of Kentuckiana in honor of her son Jacob, a senior lineman who was diagnosed with epilepsy when he was in the sixth grade. Vitale donated to the cause earlier this year.

Extra points: Hayden Kelley answered Southern’s only score when he returned the ensuing kickoff 90 yards for a Boyle touchdown during the third quarter. It was the first kickoff return for a touchdown this season for the Rebels. … Jackson Smith capped the scoring with a 31-yard field goal early in the fourth quarter. It was his third field goal of the season. Ben Rush recovered a fumble to set up the kick. … Smith was 6 for 6 on extra-point attempts, and he also punted for the first time in three games. … Boyle finished with 419 offensive yards (211 rushing, 208 passing).

Jake Hester, a senior lineman and the son of defensive coordinator Jeff Hester, was presented with the Robert Allen Yankey Memorial Rebel Award during the senior night ceremony. The award is presented annually by Boyle football alumni in memory of Yankey, a standout player who died in 1970 in a drowning accident during his senior season.

Game seven: Boyle will once again try to play at Bourbon, this time in the final game of the regular season.

The teams’ Oct. 23 game was called off after Bourbon County was designated a red county on Kentucky’s current COVID-19 incidence rate map when its seven-day average of cases rose above the critical spread threshold of 25 or more cases per 100,000 people.

Bourbon (1-5) returned to the field Friday, losing to Taylor County 28-26. The Colonels’ only win this season was over Anderson; they beat the Bearcats 41-21 on Oct. 9.

This will be the last of the teams’ three District 4A-5 games, though the outcome won’t change either team’s postseason seeding. Boyle will be a No. 1 seed and Bourbon will be a No. 3 seed during intradistrict play in the first two rounds of the Class 4A playoffs.

“It’s a district game … so we’ve got to come out prepared and ready to execute,” Haddix said. “”We’ve already had a week basically of prep for them, so it’s going to be two weeks of getting ready for them.”