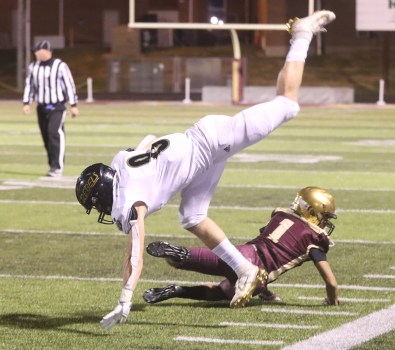 Luke Sheperson of Boyle County tries to stay on his feet after being tripped up by Bourbon County’s Marcus Floyd following a reception during the second quarter Friday. - Photo by Mike Marsee 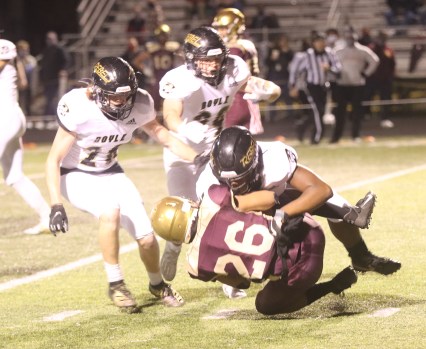 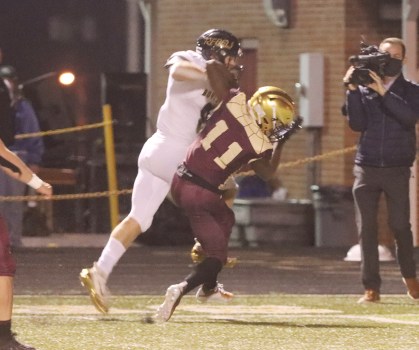 Luke Sheperson of Boyle County shoves aside a Bourbon County defender as he tries to reach the end zone after a reception during the first quarter Friday. Sheperson gained 65 yards on the play, which ended at the Bourbon 3-yard line and set up the Rebels’ first touchdown. - Photo by Mike Marsee 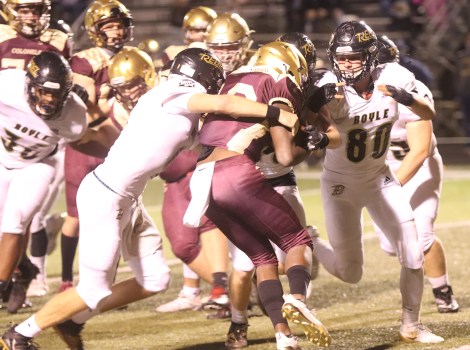 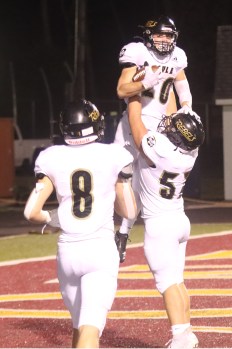 Will McDaniel of Boyle County gets a lift from teammate Jake Hester (57) as Boyle’s Luke Sheperson (8) joins the celebration following a McDaniel touchdown during the second quarter Friday. McDaniel scored all six touchdowns in the Rebels’ victory. - Photo by Mike Marsee 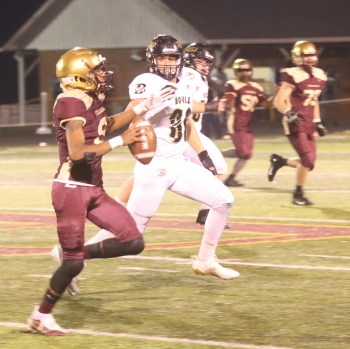 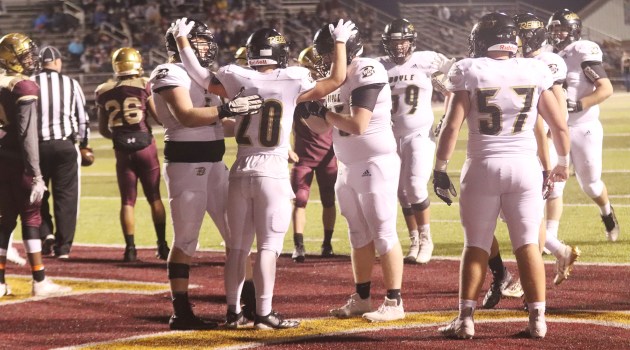 Will McDaniel (20) of Boyle County celebrates with offensive linemen Andrew Hardwick, left, and Zach Mason after McDaniel scored his sixth touchdown of the first half during the second quarter Friday. McDaniel scored all six touchdowns in the Rebels’ victory. - Photo by Mike Marsee 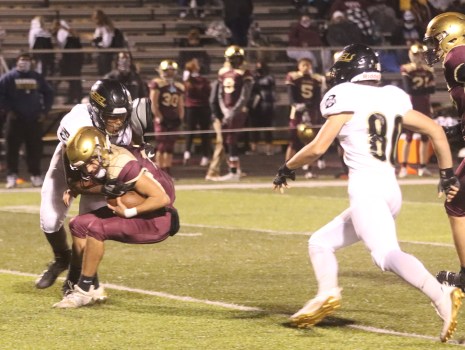 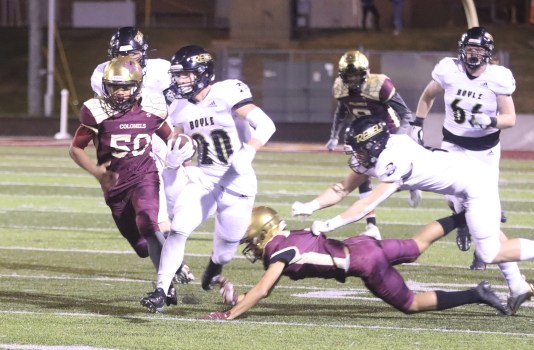 Will McDaniel of Boyle County slips through the Bourbon County defense for a 25-yard gain during the third quarter Friday. McDaniel scored all six touchdowns in the Rebels’ victory. - Photo by Mike Marsee

PARIS — It was Will McDaniel’s night to shine, but he was more than happy to share the stage.

McDaniel scored all six touchdowns in Boyle County’s regular-season finale Thursday night in the most productive game of his life and one of the most prolific performances in school history.

But when he was asked to talk about his big night following the Rebels’ 41-0 victory over Bourbon County, he said he was just one part of the equation, immediately shifting the focus to the offensive line.

“They called my number and the O-line delivered,” McDaniel said. “I think the O-line needs a lot more credit than they get. I’m just the guy running the ball; they’re the guys making the holes and making plays.”

The cavernous holes allowed McDaniel to amass 239 all-purpose yards and allowed Boyle (7-0, 3-0 District 4A-5) to make quick work of Bourbon (1-6, 1-2) in an abbreviated game at Eugene “Cotton” Correll Stadium that was halted early in the second half following a serious injury to a Bourbon player.

McDaniel, who had scored 10 touchdowns in the Rebels’ previous six games, had four rushing touchdowns and two receiving touchdowns — all in the first half. He ran the ball 20 times for a season-best 207 yards and caught three passes for 32 yards.

The work of McDaniel and the men up front also allowed the Rebels to overcome the kind of slow start Haddix said they cannot afford to repeat in the coming weeks as the postseason begins.

“That’s what we don’t want to see. We’ve got to come out and be focused right from the get-go,” Haddix said.

Boyle turned the ball over on its first series, and the Rebels’ coaches pointed out a number of errors in execution to the players during the early part of the game. The Rebels also had four penalties in the first six minutes, three of them for false starts.

“That’s just part of it, and you usually have that game,” Haddix said. “I hope we got that game out of our system, and we’ve got to do a better job as coaches of making sure they’re ready to go.”

The one constant was the running game. McDaniel handled the ball on nine of Boyle’s first 12 offensive plays and 24 of 34 in all.

“Up front we started playing well, and Will had a big night,” Haddix said. “When he got the ball in his hands, he started hitting it and going and it showed.

“He made some plays when he got the ball. We couldn’t get a whole lot of other things going … and he made his plays with it. We tried to spread it around and do this and that, but that was what got us going.”

McDaniel said it’s easy to get going when the line gives him so much room to run.

“I think they did a great job, and it’s a great feeling when they open the holes like that,” he said.

Boyle scored on every possession except its first and its last, which was in progress when the game was stopped. McDaniel ran for touchdowns of 1, 6, 14 and 8 yards, then had TD catches of 19 and 8 yards.

He said he had never scored as many as six touchdowns in a game at any level. It’s unclear whether any Boyle player has ever scored that many before, but it appears no Rebel has ever scored more. KHSAA records list players who have scored at least seven TDs in a single game, and no Boyle players appear on that list.

Other Boyle players also had big moments as the Rebels got untracked. Luke Sheperson shoved aside a Bourbon defender as he carried the ball inside the Colonels’ 5-yard line on a 65-yard reception that set up the first touchdown, and he ran down a Bourbon receiver to prevent a touchdown later in the first quarter. Boyle’s defensive linemen and linebackers bottled up the Bourbon ground game, which netted minus-20 rushing yards, and its pass rushers forced the Colonels’ quarterbacks to hurry their throws.

Early ending: The game was called with 7:55 left in the third quarter after Bourbon defensive back Brayden Frederick suffered what appeared to be a serious injury to his right leg while attempting to tackle McDaniel along the sideline in front of the Boyle bench.

Frederick left the field on a cart and was taken to a hospital. With the outcome no longer in doubt and his players visibly shaken by what they had seen, Bourbon coach David Jones asked Haddix if it was all right to end the game where it stood.

“We said, ‘We’ll take the win and let’s get out of here safe and get ready for the playoffs,” Haddix said. “It was a horrific injury, (and) our kids feel very sorry for them.”

Squeezing it in: Cancellations have become the norm in the second half of a football season that is constantly being impacted by the COVID-19 pandemic, and the Boyle-Bourbon game likely would have been canceled if the two coaches had not agreed to move the game up 24 hours.

The game was moved from Friday to Thursday to give the teams some wiggle room in case either of their counties turned red on Kentucky’s current incidence rate map, which is updated daily. Boyle County was moved from orange to red on Thursday afternoon, and Haddix said that probably would have triggered a cancellation of a Friday game.

“That was the whole reason we moved it. We wanted to get the game in,” he said. “It all looked like a smart move whenever that happened.”

Eighty of Kentucky’s 120 counties were red on the map released Thursday, the highest number to date. Red counties have a seven-day average of at least 25 coronavirus cases per 100,000 people.

It remains to be seen how that will affect the playoffs. Schools from red counties may compete at their school districts’ discretion.

Three teams have already removed themselves from the postseason. Garrard County ended its season last month after getting in only four games, and news outlets have reported that Greenup County and Paris will not play their first-round playoff games.

Extra points: Boyle completed its 13th undefeated regular season — including 12 in the past 24 years — and its third in a row. The Rebels have won 34 consecutive regular-season games since a 10-7 loss to Danville on Aug. 31, 2017.

The Rebels recovered two Bourbon fumbles, with Ben Rush getting one and Nate Rush getting the other. … Eight different players have recovered fumbles for the Rebels this season. … Quarterback Jagger Gillis was 8 for 10 for 178 yards, giving him 1,302 passing yards and 20 passing touchdowns on the season.

Playoff game one: Boyle will open the Class 4A playoffs against a familiar foe, hosting Anderson County in a first-round game for the second consecutive year.

The Nov. 13 game at Rebel Stadium will be the fourth meeting over the past two seasons between the Rebels and Bearcats. The other three were not close; Boyle has outscored Anderson 170-21 in those games, including a 54-0 victory three weeks ago.

Still, Haddix said the Rebels must be sharp at the start of this and every remaining game.

“It’s just win or go home now. You can’t be lax,” he said. “When you’ve got to beat somebody twice it’s tough on your kids getting ready to get up and play that game.”

A number of coaches across Kentucky have expressed their displeasure with the intradistrict playoff format implemented by the KHSAA last year that uses the first two weeks of the five-week postseason to determine district champions, and Haddix said he isn’t crazy about it, either.

“Obviously we’d like to play other people. When you’ve got to beat the same team twice it makes it tough,” he said. “But It is what it is. Those are the rules at play, and we’ve got to go with what they make … and just get our team prepared.”

Boyle scored 41 points in the first quarter of its regular-season win over Anderson (0-8), which was scheduled to close its regular season Friday at Mercer County. Gillis, who transferred from Anderson to Boyle for his senior year, passed for three touchdowns and rushed for two in that game.