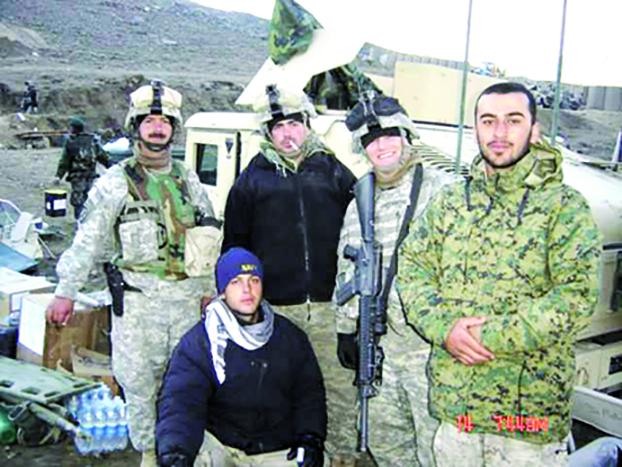 This photo was taken north of Mihtarlam, a town in Afghanistan. - Photo submitted by Paul Poland

Larry Sanders, who now lives in Winchester but is still active with the VFW Buell Bragg Post 3634 in Danville, was 20 when he was drafted in 1965 to serve in the Vietnam War. He was in the U.S. Army and served in Vietnam for a little less than a year in 1966 and 1967. 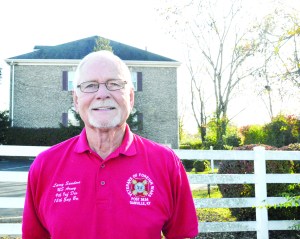 Larry Sanders poses for a photo. Sanders is a Vietnam War veteran and served in Vietnam with the U.S. Army from 1966 to 1967, for almost a year. – Photo by Olivia Mohr

His family had a similar attitude, he said — they believed if someone were called to serve in the war, they should go. In Sanders’ mind, fleeing to Canada to dodge the draft like some people did wasn’t an option.

He was in the 9th Infantry Division and the 15th Engineer Battalion. After he was inducted at Fort Knox, Kentucky, he went to Fort Riley, Kansas, for basic training and advanced infantry training. Then he was sent to Aberdeen, Maryland, and was trained as a vehicle mechanic.

Just about every night in Vietnam, he said, mortars came down on base camps, and he and others at the camps had to run to the bunkers, which were made of sand bags. During this time, Sanders was driving a five-ton dump truck and building roads and buildings.

He wrote letters to his parents monthly and got letters from students while he was in Vietnam, about 10 or 15 in total, which he tried to answer.

Sanders finished his last six months in Vietnam in communications because prior to being drafted he was working for a telephone company. His duties in camp in communications included handling radio transmissions in and out of the company and taking care of small generators throughout the company that generated electricity. He eventually made the E-5 rank as a sergeant.

Though he described himself as “lucky” when it came to his duties and experiences serving in the war, Sanders said he saw a lot of tragedy, like the falling mortars and body bags piled at heliports to be evacuated.

And, he said, the Vietnam War was different from past wars in how veterans were treated when they returned home after service.

“When we got back home, that was the worst thing, I guess, about the Vietnam veterans,” he said. “When we got home, there was no fanfare. There was no welcome home. We were called baby killers. And it went — I guess it went that way for a long time. Finally now, we’re starting to be appreciated more now.”

Attitudes toward Vietnam veterans and the growing antiwar sentiment in America were hurtful to him, he said, because he and his fellow soldiers were in Vietnam, immersed in the war.

“We did get the news some, so we knew all this was going on,” he said about antiwar sentiments.

Looking back in hindsight at the war, Sanders said he supported it then, when he started his service.

“When you go in the military, you take an oath to defend your country, and most of the people — well, all of the veterans that I know — still feel that oath,” he said.

Paul Poland, Gulf War and the War in Afghanistan

Paul Poland is senior vice commander for Danville’s VFW Buell Bragg Post 3634 and was in the U.S. Navy for 21 years. He started in 1986 and retired in 2007. He’s originally from a small town in West Virginia and didn’t feel like there was much else to do there, he said, so he practically always knew he wanted to join the military.

“I just think it’s the right thing to do,” he said. “I had two uncles that were in Korea.” 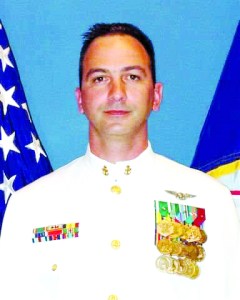 He was the first to join the military in his family since his uncles served, he said. While in the Navy, he met his wife, who is also retired from the Navy. They met when Poland was at his first duty station. They have three children, ages 35, 34 and 29. His son is 34 and was in the Army, but before he completed basic training he had to get out because he was experiencing knee issues — he wanted to be an infantry soldier but couldn’t.

When Poland retired and came home, he said he got a good reaction from people when they knew he was a veteran, unlike many Vietnam veterans, he said.

During his time in the military, he got very close with his fellow soldiers and he said he still has good friends he served with in the military. He also still stays in touch and is friends with two people who were interpreters from Afghanistan, who have since moved out of Afghanistan because they now have bounties on their heads because they helped Americans, Poland said.

In 2005, Poland was originally going to retire but got approved to be an individual augmentee, and from there the Army sent him to school to be a civil affairs specialist.

During his time in the Navy and as an individual augmentee, he was a cryptologic technician in the Navy, a support person for SEAL Team Six for three years during the Gulf War, was on the Fleet Air Reconnaissance Squadron VQ-2 using intelligence-gathering aircraft and went to Turkey, where he and others flew missions over Iraq. He also was in combat in Afghanistan because he was with the 10th Mountain Division, so he “basically was an Army guy” for a year and a half, he said.

Numbers keep rising but vaccine could be ‘game-changer’