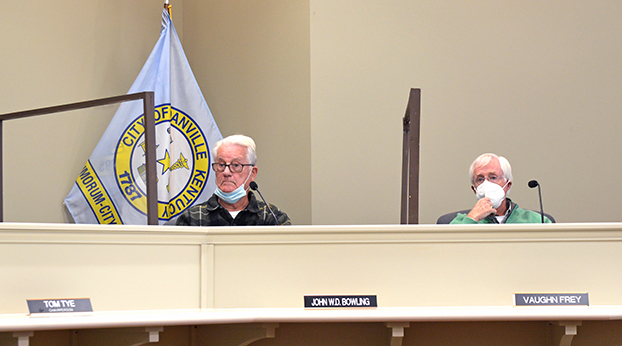 John Bowling, left, gave a dissenting vote in the Danville Architectural Heritage Board’s decision on Nov. 18 that the board recommend a moratorium on public art to the city commission. He said he is concernted a potential moratorium would get in the way of downtown progress. - Photo by Olivia Mohr

At a special called Danville Architectural Heritage Board meeting on Nov. 18, the board approved a recommendation for a moratorium on public art for 12 months or until new guidelines are implemented on public art in the downtown historic district, which received a “yes” vote among members present except for board member John Bowling, who dissented the recommendation.

Bridgette Lester, director of codes enforcement/ABC administrator in Danville and staff liaison of the DAHB, said she expects the consideration of the recommendation’s approval will be on the agenda of the regular city commission meeting scheduled for Dec. 14, as the city commission must approve the moratorium for it to be put in place.

The board and the commission met last year to discuss what design guidelines would be and what DAHB’s role would be, as discussed during the meeting, but the COVID-19 pandemic hit and put things on hold. So, looking forward, those guidelines will need to be discussed further.

During the meeting, City Attorney Stephen Dexter said that in its exploration of the downtown master plan, the city decided to institute a moratorium on new building construction in the downtown historic district until the master plan was finalized with recommendation from the city consultant, deciding future new construction during the window of time during which the plan was being finalized could potentially impede the implementation of a new strategic plan for downtown. The city gave the moratorium a 12-month window or until the plan was adopted, whichever came sooner, he said.

Tom Tye, chair of the DAHB, asked Dexter during the meeting if it would be a good idea for the board to adopt the same timeline as the city’s downtown building permit moratorium. 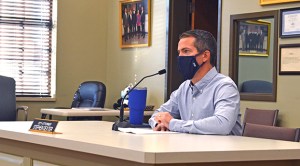 City Attorney Stephen Dexter speaks during the DAHB’s meeting on Nov. 18. He recommended to the DAHB that they consider a similar moratorium on public art that the city currently has on new building permits in the downtown historic district. – Photo by Olivia Mohr

Dexter replied yes, and said, “For the sake of efficiency and not having to come back and extend it, I would recommend using a 12-month moratorium with the caveat that if the plans or the policy is revised prior to that, that it end at that time, so whichever occurs sooner.”

During the meeting, Bowling asked Dexter why the city would want to penalize someone who came into the community to construct a building that would potentially create new jobs, when it comes to the building permit moratorium. Dexter replied the building permit moratorium only applies very limited sites and also does not necessarily apply to added construction to an existing building, and, when Bowling asked him why the city decided on 12 months for the moratorium, Dexter said “the 12 months was simply a backstop” and the city hopes the downtown master plan is implemented much sooner. At this point in time, Dexter said during the meeting, the moratorium on new building permits is about three months old, so it is actually shorter than 12 months at this point.

“We’re talking about a massive wholesale change in strategic downtown planning that is — it’s voluminous,” Dexter said. “And in order to get the type of change that I think the city is looking for in its plan, it’s necessary to put a pause on certain new construction.”

There is not, however, a moratorium on the new central fire station to be constructed downtown because it is directly part of the downtown master plan and has been strategically planned for in the city’s consultants’ work, Dexter said.

She and Tye and board member Vaughn Frey, who were present at the meeting, said yes to the recommendation, but Bowling gave it its one “nay” vote.

“I just think it stalls progress, is my whole concern,” Bowling said after the meeting.

He said he objected to the moratorium because to him, it potentially takes away the freedom of people who wish for more public art downtown. He said his rationale is that it takes government a long time to approve things, so he is worried that the city could lose public art in the process and, with the building permit moratorium on the part of the city commission’s decision, lose potential business.

Tye said as the city is drafting new rules and guidelines, he thinks of the potential for the moratorium on public art, should it be approved, as a “time-out.”
“From what was presented here, it just ties in with the city’s downtown master plan until we know what the new rules are and how we come up with our guidelines to fit those new rules,” he said. “I would just view it kind of as a time-out, just until we know where are we going, what are we doing.”