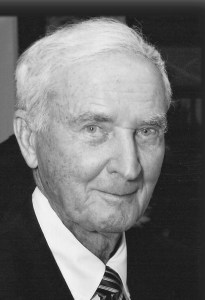 Dr. John M. Baird Sr., 95, entered the Kingdom of heaven on November 15, 2020. Born June 15, 1925 in Laurel County, Kentucky, he was the son of the late James Cowan Baird and Myrtle Amburgey Baird; he was also preceded in death by his son, James Bruner Baird.

When he was 17 years old he joined the U.S. Marine Corps and served with the 6th Marine Division in the South Pacific during WWII. Upon return from his service to his country, he was awarded his high school diploma from London High School.

He then enrolled in Sue Bennett College where he played on the baseball and basketball teams and began a lifelong passion for the game of tennis. He continued his education at Eastern Kentucky University and then on to the University of Louisville, where he earned his Bachelor of Science degree.

He graduated from the University Of Louisville School of Medicine in 1953. He began his medical practice in Perryville in 1954 with Dr. Charles W. Sisk. Years later they moved to Danville, but never forgot the kindness and generosity of the Perryville community as their practice grew and prospered over the years.

After retiring from private practice, he worked at the Veterans Affairs Hospital in Lexington, then moved to South Carolina where he worked for the VA at the Medical University of South Carolina in Charleston S.C.

He was the Company Surgeon for Norfolk Southern Railway, and served as the school and sports physician for Centre College and Kentucky School for the Deaf as well as Danville Independent and Boyle County Schools sports teams.

He took great interest in his community; he was a partner in development and ownership of the Friendship-Fellowship Home and the Danville Bowlarama. He owned the Kentucky Theatre and built the Danville Twin Cinemas. He also owned the Grande Theatre in Lancaster and the Kentuckian Theatre and Green River Drive-In in Liberty.

He was on the Board of Directors for Commonwealth Savings & Loan, and served many years as Chairman of the Danville Independent School Board, where he was instrumental in the acquisition and development of the new Bate Middle School and the Danville High School Admiral Stadium & Athletic Complex.

He was a devoted member of Lexington Avenue Baptist Church and served as a deacon, an elder and Sunday school teacher for many years.

During his retirement, he and Betty enjoyed traveling, taking cruises, trips to the Middle East and touring throughout Europe. He became an avid tennis enthusiast and would attend national tournaments across the country. Tennis was his passion and he amassed numerous accolades and awards on the national tennis circuit, maintaining a top 10 national ranking into his 90’s.

He was a gentleman of the highest character and integrity and will be missed by all that knew and loved him.

The service will be streamed at 12 noon Saturday on the Stith Funeral Home Facebook page. If you wish to send a message to the family the Hugs from Home program and the online guestbook is available at www.stithcares.com.