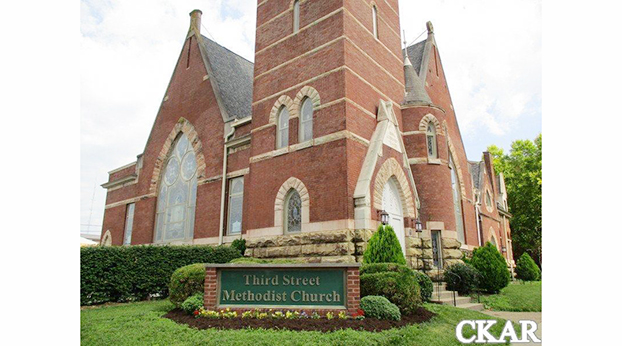 Farmers National Bank has purchased the historic Methodist Church building on the corner of Third and Walnut streets.
Bank President Marty Gibson said the board “kind of regretted” not purchasing the property, which is adjacent to the bank’s other buildings that face Main and Third streets, when it first went on the market several years ago. In 2014, Bernie and Susan Hunstad bought the church, which was originally Centenary United Methodist Church, and spent time and money to preserve the structure, Gibson said.

“Bernie preserved and improved,” the old building. All of the repairs and efforts “saved the building.”
Gibson said the property consists of about 15,000 square feet and includes the small enclosed green space between the church and Farmers Bank, and was purchased for $270,000.

He said the church’s small park and historical “preservation is meaningful to us,” so the board won’t be altering the facade in any way.

Gibson said once the pandemic subsides, the bank plans to use the sanctuary space, which can hold up to 225 people, for its corporate training days and social events. He said currently the bank has about 180 staff members from all of its locations.
There are four tenants leasing space in the building, including the Third Street Methodist Church congregation, who will continue using the building, Gibson said.

It also plans to lease open office space to non-profits and other organizations that need a place to call home. Maybe within about four years, it will be open to the community for meetings and smaller events, Gibson explained.
He said having the parking garage just across the street, will be helpful in the bank’s endeavors to “pull the community to that building.”

For now, Farmers Bank is having the building power washed, the outside trim painted and the newer windows “shored up” to get ready for winter. Cosmetic work will also eventually begin inside, he said, “one room at a time.”
He said the historic stain glass windows “are in pretty amazing shape.”

According to Advocate-Messenger archives, the Hunstads were recognized by Boyle Landmark Trust in 2015 for their efforts in preserving the Romanesque-styled church that was built in 1891. It was the third church to house the Methodist congregation in Danville, which was also the first Methodists organized west of the Allegheny Mountains.

It was made of brick and rough-cut stone with a squared tower and stained glass windows.

The church was damaged by flooding in 2008, and the Centenary congregation sold it and moved to a new location on Perryville Road.