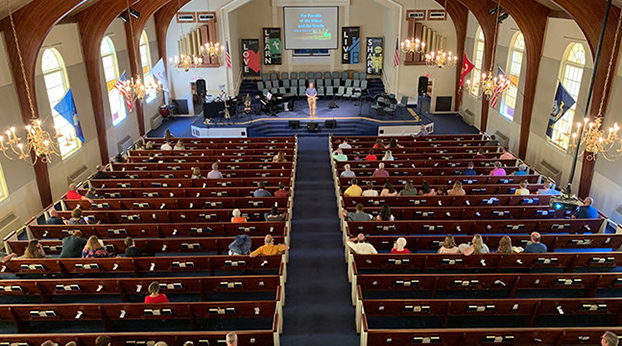 Gov. Andy Beshear is asking all religious leaders across the state to immediately suspend in-person services at their houses of worship for the next three to four weeks.

The governor did not call or meet with leaders of the Kentucky Baptist Convention, the state’s largest denomination of churches, but did speak with the Kentucky Council of Churches during a regular weekly call. The KBC is not affiliated in any way with that organization.

Beshear asked churches within the Kentucky Council of Churches to consider having virtual services for the next three or four Sundays. But he said during the Thursday press conference it goes for any house of worship.

Dr. Todd Gray, the executive director-treasurer of the KBC, said Kentucky Baptist pastors have been careful and cautious from the beginning of the pandemic.

“Kentucky Baptist pastors and churches are doing a model job of self-regulating as we continue dealing with the COVID pandemic,” he said. “They are monitoring the news and the number of cases in their communities and making adjustments as needed. They continue to make decisions based on the well-being of the congregation they serve. I am certain these godly leaders will continue to do the same in light of this most recent request from our governor.”

Beshear said he has regular meetings with the Kentucky Council of Churches. He backed up his decision by saying there were examples of houses of worship being a virus spreader.

“The virus is spreading so fast right now and I think we have at least 35 examples in the last six weeks of spread in and around a house of worship, not just worship services but potlucks and others,” Beshear said. “My recommendation to them (the Kentucky Council of Churches) was to do virtual-only services through the same period that we are asking other people to certainly change the way they’re doing things. That will be starting on Friday and through the end of Sunday, Dec. 13.”

It is a request and not a mandate, he said, like what was issued in March that a federal court ruled as unconstitutional. Beshear came under harsh criticism in the spring for that decision.

“It is a request but, I tell you what, I think the vast majority of houses of worship out there are already doing this seeing what’s going on in their community,” he said. “They want to protect their congregations and our faith leaders have been so incredible in their leadership during this in protecting their congregation, but in also pastoring to them and helping people through the anxiety and difficulty who are questioning why us and why this?”

Beshear said if churches choose to meet that doing so in a drive-up service or where they are outside is the best option.

“Certainly drive-up services can be really safe but try not to encourage or let people get out of their cars.” he said.

The governor mandated some restrictions on Wednesday to stop the third surge of the coronavirus in Kentucky, including closing public and private schools from Nov. 23 until January, eliminating indoor seating at restaurants and bars until Dec. 13, limiting private indoor social gatherings to two households and eight people, and limiting venues for weddings and funerals to 25.

Gray is confident in the decisions that Kentucky Baptist pastors will make for their own churches.

“Kentucky Baptist pastors love the people that God has called them to shepherd and will exercise great wisdom while providing for the essential spiritual needs of their congregation, as well as reaching out with the gospel to those who do not yet know Christ.”

Gray understands the virus has had terrible consequences for many. “Kentucky Baptists continue to pray for those impacted by COVID-19 and for a vaccine to soon be approved and delivered,” he said.