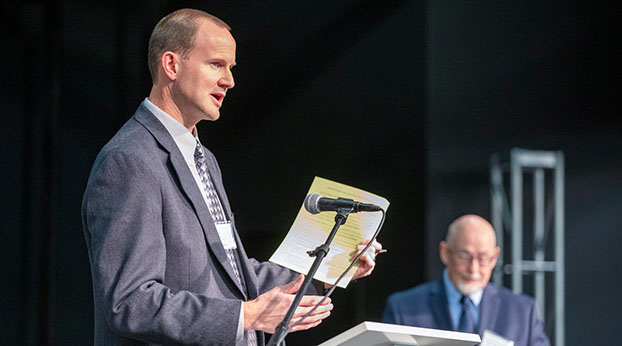 Wes Fowler, pastor of First Baptist Mayfield and president of the Kentucky Baptist Convention, said he will be praying for Kentucky Baptist pastor and churches and Gov. Andy Beshear during this public health crisis. (Kentucky Today/Robin Cornetet)

Reaction to Gov. Andy Beshear’s request to halt indoor services for houses of worship over the next three to four weeks ranged from disappointment to compassion from a variety of Kentucky Baptist pastors.

Beshear is asking – not mandating – churches in the commonwealth go virtual-only through Dec. 13 as the coronavirus surges. Kentucky reported its highest day ever on Thursday with 3,649 new cases and 30 deaths, the second-highest total in a single day. He said hospitals are being overwhelmed and on Wednesday put in several restrictions including closing schools to in-person learning and limiting restaurants and bars to outside service only.

Media outlets leaked word of Beshear’s plans to ask churches to halt indoor services and reported the news prior to his press conference. The governor didn’t mention the request until asked a question by a reporter.

Wes Fowler, the new president of the KBC and pastor of First Baptist in Mayfield, said he would be praying for pastors of Kentucky Baptist churches and for Gov. Beshear over difficult decisions ahead.

“1 Timothy 2:2 teaches us to pray for ‘all who are in high positions, that we may lead a peaceful and quiet life, godly and dignified in every way.’  We’re certainly not instructed to always agree with those in high positions, but we’re also not permitted to malign them when we disagree,” Fowler said.  “In fact, we’re called to respond with dignity.  So, although I might have concerns with the governor’s most recent recommendation regarding churches, my intention is to pray for him as he leads our commonwealth.  He’s under tremendous pressure and he needs our prayers.  And, while I’m praying for our governor, I will also be praying for our Kentucky Baptist pastors and churches.”

‘Recommending what he believes is best’

Steve Weaver, the pastor of Farmdale Baptist, said Kentucky Baptists shouldn’t be angry over the recommendations.

“He is recommending what he believes is best based on the data that he is receiving from his advisors,” Weaver said. “Pastors should take those recommendations into consideration, along with their knowledge of their own ministry context and the vulnerabilities of their own congregations, as they make plans to continue their God-ordained ministry in the most responsible manner.

“There will be a variety of responses based on those considerations. Let’s extend charity to all as we make these important decisions while continuing to honor both God and government.”

Curtis Woods, the newly called pastor to Severns Valley Baptist in Elizabethtown, took a compassionate view of the situation.

“Our church leadership understands the dual relationship of being a citizen of heaven and a faithful friend on earth,” Woods said. “The Governor is doing his due diligence to fight this global pandemic one hard decision at a time. We are praying for wisdom and a vaccine.”

Richard Carwile, the pastor of Bloomfield Baptist, said Christians need to pray for Gov. Beshear to have wisdom as he guides the commonwealth through the pandemic. He said the church plans to pray for him as they gather Sunday.

“Worship is essential to the life of every believer and is not something we should take lightly,” he said. “We will continue to follow CDC guidelines as we gather for worship each Lord’s Day at Bloomfield Baptist Church.”

Churches were scrambling on Thursday night to begin making decisions about upcoming services only three days away.

“I am deeply disappointed to learn of these new recommendations coming from Frankfort directed toward local congregations,” Noffsinger said. “I feel that they are not only out of bounds but also out of order. For months churches have worked tirelessly to follow state guidelines and most of all keep our people and communities safe. As I look at the policies enacted by the overwhelming majority of churches, I feel a sense of pride in what we have done. We are not only exercising our rights as citizens of the United States, but also striving to exercise our rights in a right and responsible manner.”

“They are monitoring the news and the number of cases in their communities and making adjustments as needed,” he said. “They continue to make decisions based on the well-being of the congregation they serve. I am certain these godly leaders will continue to do the same in light of this most recent request from our governor.”

Josh Schmidt, the newly elected first vice president of the KBC, said  First Baptist Grayson would continue meeting in-person on Sunday mornings but will go virtual in the evening services.

“I am thankful that Kentucky Baptists continue to lead the way in protecting their communities,” he said. “One of the blessings of the Southern Baptist convention is that we are local, autonomous churches on mission together for the Gospel of Jesus Christ. Every church is in a different ministry context and will need to make decisions based on their community. At FBC Grayson, we pray for and respect our governor and we also believe that we can continue meeting in person carefully and vigilantly to the glory of God. If society ever needed the Church, it is now.”

Pastor: KBC should be in conversation

David Prince, the pastor of Ashland Avenue Baptist in Lexington, said the governor can be assured of prayers as he leads the commonwealth through the treacherous territory caused by the pandemic. He did say that Gov. Beshear should have contacted leadership of the KBC for input since it is the largest religious body in the state of Kentucky.

“I fear the governor has cut KBC leadership and churches out of the conversation because they might offer a differing perspective. I am proud of how my church, Ashland Avenue Baptist, has proceeded with an abundance of care, caution, and compassion,” Prince said. “I have seen the same in many other churches. Our on-the-ground situation at present leads us to move forward with the carefulness and caution we have in recent days with our Church on the Lawn services while always being open to prayerfully change direction if the situation changes.”

Prince said, like the governor, churches and pastors could use even more prayer. “Churches also face difficult decisions as we seek to lead our flock to love God and neighbor through this significant health crisis.”