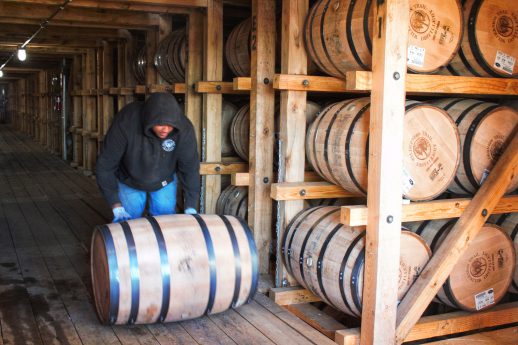 Wilderness Trail Distillery has earned Heritage Level Membership status, according to a press release, and it was also announced Thursday that the distillery has received a prestigious Esprit de Corps Award by the Kentucky Distillers’ Association.

The Espirit de Corps Award, according to a press release, “can be bestowed by the KDA Board Chair to individuals who have, ‘by demonstrable and honorable action,’ gone above and beyond the call of duty to advance the mission of the KDA and Kentucky’s signature Bourbon and distilled spirits industry, KDA President Eric Gregory said. The award was given to Wilderness Trail Distillery due to its efforts during the COVID-19 pandemic — the distillery made hand sanitizer and donated it in an effort to control the spread of the disease and protect doctors, first responders and emergency personnel. For this, co-founder of the distillery Shane Baker was applauded in the press release, and in the press release he is quoted saying his efforts with the hand sanitizer were driven to help people in need and to use the distillery’s resources to respond to the pandemic.

As for the Heritage Level Membership status, to qualify as a member, “distilleries must have at least 25,000 barrels of distilled spirits aging in Kentucky warehouses,” according to a press release, and this is “the highest level in the non-profit group that unites and leads the state’s signature Bourbon and spirits industry,” and the KDA now has 14 Heritage members. With Wilderness Trail Distillery’s new distinction as a Heritage member comes “an expanded leadership role in the management of the association and the future of the iconic industry,” according to the press release.

Gregory said what the membership entails is that Heritage members are the KDA’s “guiding voices on industry issues and priorities.”

“Each Heritage member has the opportunity to appoint a voting representative to the KDA Board of Directors and all advisory panels, including the right to become an esteemed Officer of the Board and lead the historic organization and the industry at large,” he said in an email.

When a distillery reaches the 25,000 barrel mark of distilled spirits aging in Kentucky warehouses, Gregory said this means the KDA board sees the distillery as a significant player in the industry, and the Heritage member status comes with perks. He said members have increased brand exposure in KDA marketing and social media, visibility at “exclusive” KDA events and are eligible to join the Bourbon Trail tourism experience and nominate individuals to the Kentucky Bourbon Hall of Fame.

“The technical expertise of Shane Baker and Pat Heist has been instrumental in helping other members, especially smaller distilleries,” he said in an email. “They are so incredibly willing to volunteer and assist with any problem — especially the production of hand sanitizer during the pandemic. They’re also heavily involved in the research side which is key to the future of our industry.”

Baker said Wilderness Trail Distillery actually met the 25,000-barrel milestone in 2019 “and had delayed the election process to move up to Heritage member for the distillery to prepare for the increase in tourism and footprint across the United States.”

“It exemplifies the hard work and time spent on building a successful operation and turning that into a brand,” he said in an email. “Our staff is key on maintaining that quality expectation, sharing the story told here in Danville, Kentucky, and connecting with ambassadors from all over with our community and whiskey that creates a life of its own. It is more than pride for our team to achieve this status and we are elated to have this opportunity.”

He said the distillery continues to grow throughout the U.S. and into four other countries, with more expansion to come over the years.

“The distillery is already well beyond the levels needed to maintain Heritage status in terms of inventory as well as offering a mature Kentucky Bourbon for the world to fall in love with,” he said in an email.