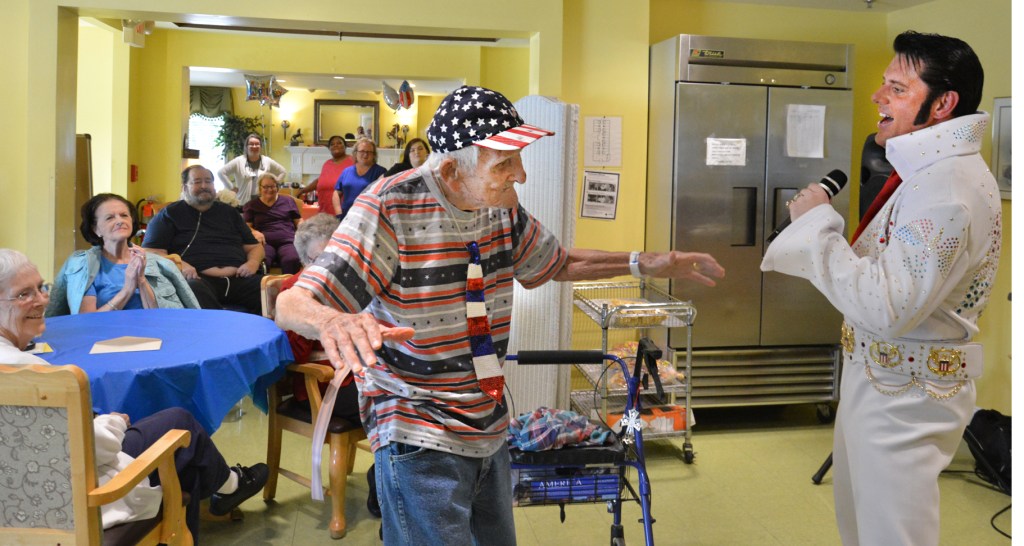 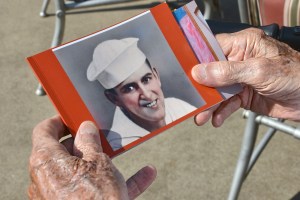 Ernie Blanchet reminisces while looking at a photo of himself taken while he served in the Navy during World War II.

Ernest “Ernie” Blanchet, who had been designated as Kentucky’s oldest living World War II naval veteran, has died at the age of 107.

Blanchet was featured in The Advocate-Messenger when he celebrated his 105th birthday on June 18, 2018. Before the celebration where he lived at Charleston Health Care Assisted Living, Blanchet said, “I hope they have music. I’m a great dancer.”

Blanchet, who died Nov. 13, was known at Charleston for his passion for music and dancing.

At his 106th birthday party last year, an Elvis impersonator entertained the residents and staff and Blanchet couldn’t help but to get up and dance too, with the help of his walker.

For the celebration, Blanchet was decked out in a red-white-and-blue ensemble. His hat commemorated his service in the Navy, and a bedazzled tie showed his fun-loving, infectious good nature.

Happy to be enjoying music again with his “family” at the assisted living facility, for his birthday, Blanchet stood and shouted happily, “I’m back to life! I’m back to life!”

Blanchet was the ninth of 12 children born to his parents, Arthur and Marion Blanchet on June 18, 1913.

He said his grandmother was a singer in France in the 1800s before marrying an American and moving to the U.S.

In 2018 Blanchet recalled at the end of World War I he was about 7 years old when he watched the sick and wounded soldiers returning home.

He said after World War I, his dad and uncles toured in a band where he played cornet and banjo.

When he was a boy growing up in Troy, New York, Blanchet said he loved going to the silent movies which cost a nickel to get in.

He also remembered how he would sneak into the circus when it came to town and enjoyed meeting the “trapeze people.”

Being a part of a large family, Blanchet said he went to work at a young age to help support the family. He said he began working in the local textile mills for $12 a week making heavy underwear for soldiers.

In 1941, at age 28, and just months before the Japanese attack on Pearl Harbor, Blanchet landed a job at Watervliet Arsenal.

When the United States entered World War II, he joined the Navy and was “a radar man” on the U.S.S. Bivin (Destroyer Escort 536) in the South Pacific.

In addition to loving music and dancing, Ernie Blanchet had been a prolific painter of landscapes, portraits and copies of well-known paintings.

He and his wife Josie participated in the Capital District Senior Games, New York State Senior Games at Cortland State and the U.S. National Senior Olympics at St. Louis. He also played horseshoes, golf, and bowling in which he won a great deal of tournaments.

In his elder years Blanchet enjoyed gardening, making elderberry wine, and he continued loving music and dancing. He always said, “To live a long life you need to keep moving.”

He is survived by two daughters, Penelope Ann King of Melbourne, Florida, and Nancy Coonradt of Troy, New York, and seven grandchildren.

A private memorial service will be held at a later date in New York. Spurlin Funeral Home, Stanford, is in charge of arrangements.