Homelessness exists locally, stigma is the biggest obstacle to help 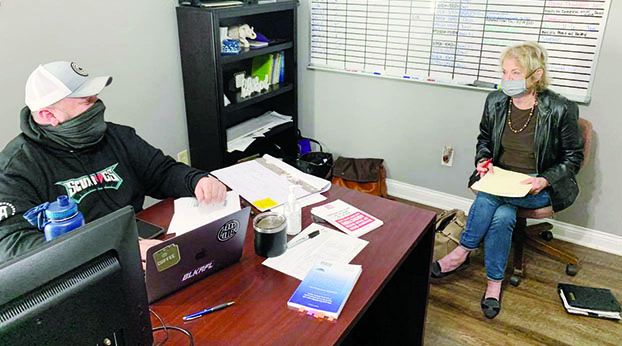 Roger Fox, director of outreach for Shepherd’s House, and Kathy Miles, coordinator for Boyle County Agency for Substance Abuse Policy, discuss the issue of homelessness in the local community. - Photo by Bobbie Curd

Those working to find shelter and other resources for the homeless in Danville say even though it’s not as obvious as in other, bigger communities, the problem is still here. And that problem has been at the top of the “local issues” list for years, but many feel the stigma surrounding homelessness — and the “not in my backyard” attitude towards shelters — is what’s prevented any real action.

A group has formed, linking local resources that those with no place to go can use to help get their feet back on the ground. The group is working to create a tightly connected support system, and to educate the public and advocate on behalf of the homeless, hopefully creating a better understanding of the situation as a whole.
—
Kathy Miles and Roger Fox took some time to talk about why they began the Emergency Housing Committee, what Miles describes as an ad hoc group formed out of Boyle County Agency for Substance Abuse Policy (ASAP), which she is coordinator of.

Fox, who is director of outreach for Shepherd’s House and has taken the lead of the committee, constantly sees the need due to working with those coming out of jail, seeking treatment.

He said the need for emergency housing has been something discussed locally for years. “Yet, somehow … the support hasn’t really been there.”

“You know the opposition …” Miles said, referring to the “‘It’s needed, but not in my backyard’” attitudes toward creating a shelter. “It’s just not the easiest thing to address … Also in terms of funding.”

Miles said although some funding was made available due to the opioid epidemic, treatment can’t be billed for emergency shelter.

“Unless you’re going to make it a treatment program, and that’s not what we need.”

And due to some recent postings on social media, Fox and Miles thought it was time to explain how to go about getting support.

“The people on Facebook apparently thought the county and city could come up with the money, and it should just be demanded from them, they should be told to do it …” Miles said. “But I’m sorry, (those commenters) just don’t understand those budgets and what all they have to do with them.”
—
Fox said homelessness doesn’t discriminate; it’s not only those with substance abuse or mental disorders. “This could just be the person who’s out of work,” something he feels we’ll be facing a lot of with the COVID-19 pandemic — families being evicted due to job losses.

And Miles said those who have left jail or prison oftentimes float around because they have no support system, or go back to bad situations for a roof over their head. These events cause them to use again, leading to other crimes and eventually a trip back to jail or prison — “the revolving door” to the cycle, she said, which homelessness greatly affects.

“And Roger works with those who are coming out and do need treatment, but what do you do with them when they have nowhere to stay and you’re waiting to get them a place in treatment …” Miles said.

That’s something Shepherd’s House deals with a lot, Fox said. “Somebody will get out of jail on a Thursday or Friday, report here, and we’re scrambling to find all those resources. They don’t have insurance, that takes 72 hours to kick in,” he said, and they usually don’t know where they’re going to stay that night.

Most often, the places they have to return to are surrounded by what they are trying to get away from — drugs, and abusive or other situations.

“Kathy and I, being a part of (UK’s) HEALing Communities Study, we’re having all these meetings, and we’re finding out — housing is still our No. 1 issue,” Fox said, which reignited the conversation, and they were able to get different individuals involved in the task.

“Now that we’re having these (Emergency Housing Committee) meetings, we have the players sitting at the table,” Fox said, including representation from the fiscal court, city commission, and even Planning & Zoning.

Fox said P&Z Director Steve Hunter has joined in previously, helping the committee to understand regulations involving opening a shelter, which is a goal down the road.

Miles said they also get input from Ephraim McDowell Regional Medical Center, through the emergency room. “When people don’t know what else to do, they go to the ER, then they have to figure out what to do with them,” she said. And this includes many from surrounding counties who are funneled through the local hospital. “And do we have a shelter in those counties that touch Boyle County? Not really, no.”
—
Fox and Miles say it’s common for prisoners to have medical conditions flare up just as they’re being released from jail, and must be transported to the ER by jail deputies. Many of these situations arise due to that newly released inmate not knowing where they will lay their head that night.

“If there would’ve just been a shelter for the guy to go to, and have providers come in through New Vista (mental health services), through Shepherd’s House, through Isaiah House … all of these different agencies to engage with these individuals, and provide this case management for them — help them get to their next need.”

“The sheriff deputies and the police, it eats up a lot of their time, dealing with all these issues,” Miles said.

“As a police department, we interact with individuals frequently who are living on the streets,” said Asst. Chief Glenn Doan. He said those calls oftentimes come in the form of check-welfares, called in by third parties, where someone is reported being on private property or in a parking lot for excessive amounts of time.

Doan said, “We do what we can to offer assistance or a ride, but our options are limited.” He said the department is starting to see increasing calls coming in from homeowners or leaseholders, wanting individuals removed from their property. In these cases, Doan said what is happening is a friend or family member is letting someone stay with them temporarily, and for one reason or another this agreement ends and the other party does not want to leave and has nowhere else to go — so the police are called.

“So, essentially, that individual is homeless but just moves from location to location with whoever will allow them to stay, until their options run out,” he said. Calls for welfare checks on individuals suffering mental crises also continue to rise, and the department sees the direct correlation between mental health, substance abuse, and homelessness in the community.

Miles and Fox have been describing the work of the committee as creating a “landing and launching pad.”

Miles said the goal is not to just provide them with a cot and a meal. “It’s our goal to stop this revolving door that all those people we just talked about — the jail, ER, everybody sees this all the time — to try and link them with the resources they need, stable housing and treatment, get on Medicaid or disability. But it’s not good enough to just give them a bed and a meal.”

The committee also includes representatives from Community Based Services, the jail, Public Advocacy, the Salvation Army, and Probation and Parole, for example.

Fox said they know the faith community is supportive in the committees’ efforts, but he and Miles would like to have more involvement from it.

“And COVID messes everything up, and we know the churches are hurting,” Miles said. A survey has been developed, to be sent out by the county judge-executive to the churches in the area, asking each how many they encounter who need help with shelter.
—
“At some point down the road, we’re going to need people to advocate for us to make this happen,” Fox said. “Due to the stigma of ‘not in my backyard,’ that stigma is real and alive, and will always be the biggest obstacle.”

Miles said it does not help when people “say things off the top of their head, like on social media, that we have to go to the city and county and tell them they have to do this. That’s not the way to do this, we know they don’t have the extra money. They can’t just start it, they have to know the need is real …”

Fox said it’s also imperative to get everyone on one page. “It needs to be a collective effort that benefits all of Boyle County, and the surrounding counties …”

“Because they end up here quite a lot,” Miles said.

A lot of homeless people aren’t seen; they’re under bridges at night, in makeshift camps near streams, inside of unused barns or other structures. Some homeless surf from couch to couch.

“We spend a lot of time as a committee defining what homelessness looks like in Boyle County, which is completely different from what it looks like in other cities,” Fox said.

“With access to the right resources — to jobs training, to treatment for mental health or substance abuse disorder, to education — having that all in one easy spot for people to work their way out of the situation they’re in, we can provide so much that way.”

Miles said simply put, she expects our community to be able to do better. “The next move is to help the Housing Authority implement its grant …. Help link those people with case management … and continue to meet about alternative funding and opportunities for another shelter.”

She invites anyone to reach out to her or Fox who would like to learn more about the resources offered. Miles can be emailed at kathy.miles@centre.edu; Fox at rogerfox@shepherdshouseinc.com, or by calling the Shepherd’s House.

“We always talk about building a good foundation for your life, and housing is one of those bricks that you have to have in a strong foundation,” Fox said. “Once you accomplish that — a job, and sobriety — all the sudden you are so much stronger a person …

You’re less likely to go back to the detention center, or show up at the ER because you don’t have anywhere else to go.”

Miles said she’d like to put together training for people to explain where the resources are. “I think when people encounter others who are compassionate and knowledgeable and don’t just blame them for being down on their luck, it makes all the difference in the world.”