Giving thanks for education 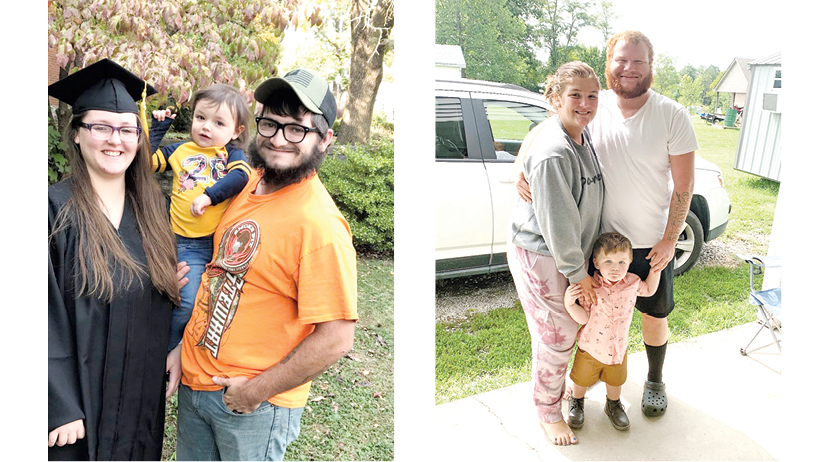 Cousins Alexus Humfleet and Raelyn Barnes Thompson are both married mothers to young children. Humfleet encouraged Thompson to try for her GED, and after seeing Humfleet’s test scores, Thompson had the confidence to pursue finishing her own education. The two have since earned their GEDs around the end of September and early October.

“Alexus is really the only reason that I ever actually went through with it,” Thompson said.

The cousins had been talking about getting their GEDs for months, but both were busy with balancing work and motherhood, and other responsibilities at the same time. Thompson got married while she was in the process of getting her GED. The offering of a blend of virtual and one-on-one learning in the midst of the COVID-19 pandemic by the Boyle County Adult Education/GED Program, which normally offers classes with groups of students, worked for Thompson and Humfleet as they took on pursuing their GEDs in addition to their other responsibilities. Thompson said virtual learning was great for her, but the first time she went in to see instructor Beth Leahey, who worked with her and Humfleet, she regretted not going to her sooner because the one-on-one help made things much easier since Leahey was there for whatever she needed.

The cousins both dropped out of Danville High School. Humfleet dropped out in September 2018 after she got pregnant with her son her sophomore year and experienced a difficult pregnancy and was put on bed rest. She tried homeschooling, but it became too much for her because she was constantly in the hospital with contractions, she said. Then after she gave birth to her son, she said she didn’t want to do much else other than hold him and spend time with him. In some ways, she said she wishes she would have gone back to school to get her diploma.

“But at the same time, I really wouldn’t have changed it,” she said.

Part of the reason Thompson dropped out of school when she was about 15 was because she was having some health issues and had teachers, people who handled attendance, and once a police officer following her around in the hallways because she wasn’t feeling well. She got pregnant with her daughter later, after she had dropped out of school. She tried the same homeschooling program as Humfleet, but she had always struggled with school, so she didn’t do it.

Thompson had been working at Wal-Mart before she got her GED, but the hours she was working and the hours she needed to go into the office were the same, she said. Childcare was hard to find, so she wasn’t always able to go to work, and as a result, she had to let the job go until she completed her GED, and she said now she is about to start a work-from-home job.

Before Humfleet earned her GED, she worked at a construction site flagging. She left so she could get her GED and start college.

Now, she is currently looking for work. Her mother-in-law watches her son for her while she works. Thompson eventually wants to get a bachelor’s degree in social work and help children who are abused or in a difficult position, and Humfleet is enrolled online through Campbellsville University and is in her six-month certified medical assistant class and plans to graduate in May.

Eventually, she wants to be a registered nurse.

Humfleet’s son is now 1 year old and will be 2 in December. During the pandemic, Humfleet said one stressful thing about raising a child during the pandemic is that she isn’t able to take her son anywhere to wear his energy out. She said her son has asthma and respiratory syncytial virus, so she doesn’t even take him to the grocery store during the pandemic.

“I don’t need him catching the virus because it would go terribly wrong, so I try to keep him out of public as much as I can,” she said.

Thompson stays at home with her 2-year-old daughter and makes sure they go outside for some fresh air at least once a day. They watch a lot of Netflix together, she said. The hardest thing about raising children during the pandemic, she said, can be their attitude.

She also said she’s potty training her daughter, which she described as “the hardest thing ever.”

There haven’t been GED ceremonies in a while due to the pandemic, but both Thompson and Humfleet agreed they didn’t need a ceremony — they were just happy to have their GEDs. Also, cap and gown pictures are still offered through the program. Humfleet hasn’t gotten hers done yet, but Thompson has. Thompson said her husband and daughter were able to be with her for her pictures of her in her cap and gown, so that was enough for her.