Rebels ‘survive and advance’ past LexCath, 49-41 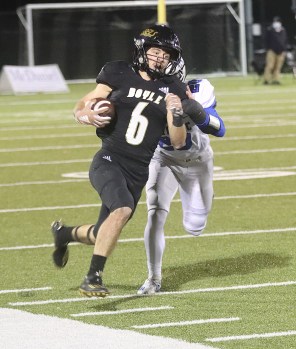 Cole Lanter of Boyle County tries to stay inbounds as he avoids Lexington Catholic defender Teddy Bullock along the sideline during the first quarter Friday. Lanter had six catches for 104 yards in the Rebels’ 49-41 victory. - Photo by Mike Marsee 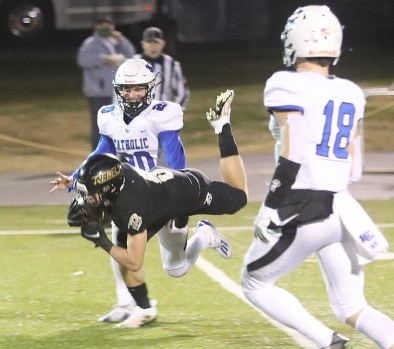 Luke Sheperson of Boyle County falls into the end zone as he catches a pass from Jagger Gillis for a 26-yard touchdown during the second quarter Friday. Sheperson had two touchdown catches in the Rebels’ 49-41 victory. - Photo by Mike Marsee 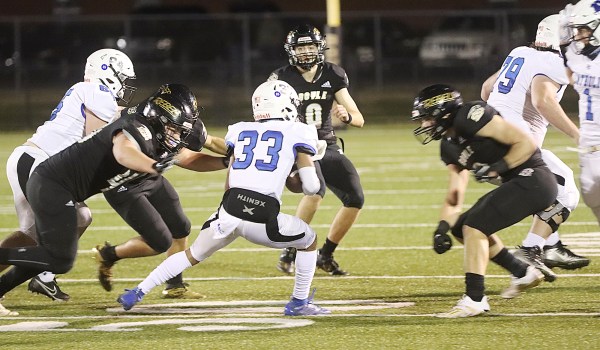 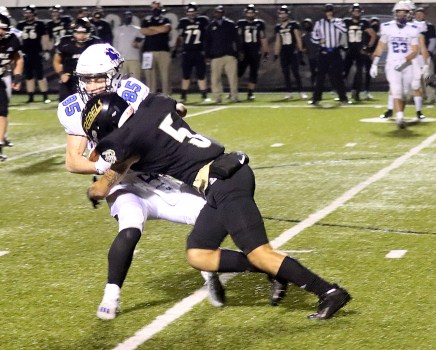 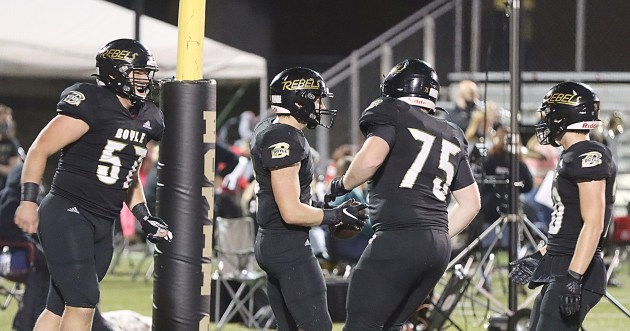 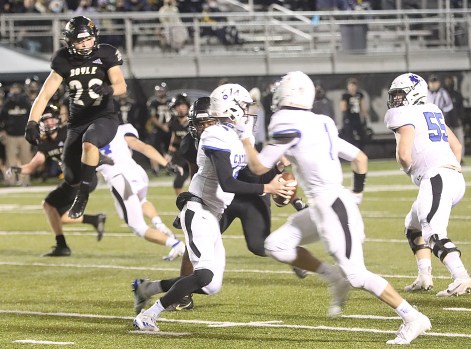 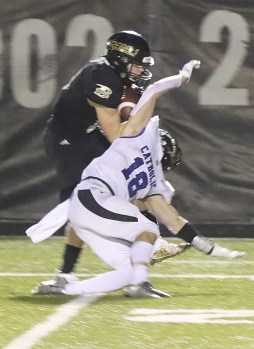 Luke Sheperson of Boyle County comes down with a reception over Lexington Catholic defender J.D. Woodall for a 35-yard gain during the fourth quarter Friday. Sheperson had two touchdown catches in the Rebels’ 49-41 victory. - Photo by Mike Marsee 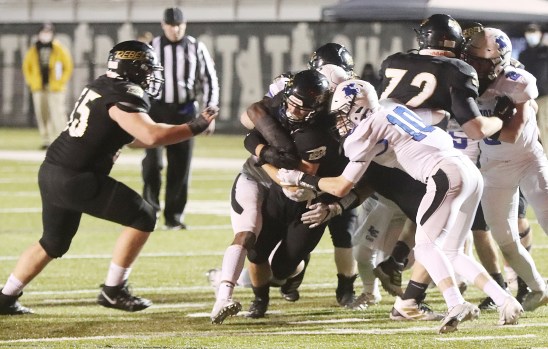 Will McDaniel of Boyle County tries to fight his way through Lexington Catholic defenders on a fourth-quarter carry Friday. McDaniel rushed for 152 yards and three touchdowns in the Rebels’ 49-41 victory. - Photo by Mike Marsee 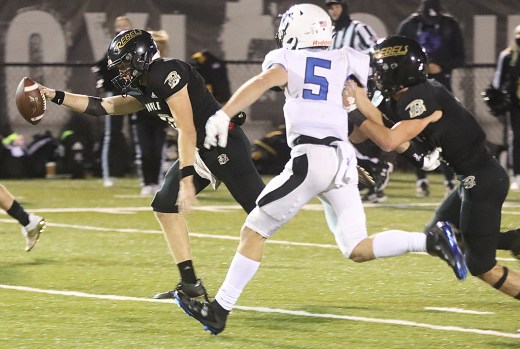 Jagger Gillis of Boyle County reaches across the goal line to score on a 31-yard run before Lexington Catholic defender Jackson Klein can reach him during the second quarter Friday. Gillis passed for two touchdowns and rushed for two more in the Rebels’ 49-41 victory. - Photo by Mike Marsee

It had been a long time since Boyle had been in a game that was truly competitive in the fourth quarter, and even longer since it had won one. But the Rebels proved they were up to the challenge Friday night by fighting off Lexington Catholic for a 49-41 victory at Rebel Stadium that gave them their fourth consecutive district championship.

It was a far cry from the teams’ first meeting Oct. 9, which Boyle won 40-0, but it felt every bit as good — even better in some respects — to the Rebels.

“It feels good. It shows that we can fight,” Boyle wide receiver Luke Sheperson said. “Now that we know that we can play in a tight game … that’ll help us in the long run.

It will help much more, Boyle coach Justin Haddix said, than another 40-0 win would have.

“No doubt about it,” Haddix said. “It kind of wakes us up a little bit, and we’ve got some things to work on.

“It was a good battle for us, and obviously we came out on the winning side of it, so it’s better. It’s survive and advance in the playoffs.”

In the first game for both teams in three weeks, Boyle (8-0) survived a 38-point onslaught by LexCath (5-3) to beat the Knights for the seventh game in a row and win the District 4A-5 title for the second straight year.

A game that appeared to be well in hand at halftime wasn’t truly decided until Cole Lanter recovered an onside kick with 16 seconds remaining.

“We knew it was going to be a battle this week, and we wanted a battle,” Haddix said. “I don’t know if we wanted it that close, (but) we found out a lot about our kids. When things don’t go good, we’ve just got to continue to be playing and doing the things that we’ve got to do. I’m very, very proud of our football team.”

There will surely be a price to pay next week in the film room and in practice. The Boyle defense gave up 490 yards to a LexCath team that managed only 155 in the teams’ first meeting seven weeks earlier. And while the Rebels’ offense was plenty productive, it had more empty possessions (four) than in any other game this season.

“We’ve got to work on a lot of things,” Haddix said.

But that’s for Monday. On Friday, the Rebels said it felt pretty good to be in a fight for a change — and even better to win it.

“It’s like going to Disney World,” Lanter said. “I can’t describe it. It’s awesome, especially knowing that you left everything out there, blood, sweat and tears. It’s just awesome. Nothing better.”

Jagger Gillis threw two touchdown passes to Sheperson and ran for two TDs during Boyle’s second-quarter barrage, and Will McDaniel rushed for 152 yards and three second-half scores to lead the Rebels’ advance to a third-round game against Rowan County next Friday.

LexCath quarterback Jack Gohmann led the Knights’ rally by throwing for 295 yards and two TDs in the second half.

Boyle took a 42-17 lead about two minutes into the fourth quarter, but LexCath responded by scoring three plays and 36 seconds later, then recovered an onside kick and scored again in just over two minutes to pull within 42-31.

McDaniel’s third touchdown gave the Rebels a 49-31 lead with 5:11 remaining, but the Knights matched that by driving 77 yards in about three minutes to make it 49-38 with 2:03 to play.

The Knights used their timeouts and forced Boyle to punt, got the ball back with 1:29 left and got a 40-yard field goal from Max DeGraff that led to one last onside kick attempt before Lanter’s recovery wrapped things up.

Did Lanter or anyone else with Boyle imagine at halftime that it would come to that?

“Honestly, I was hoping not,” he said. “But I know they have a good football team, and they played well in the second half. We didn’t really expect it like that, being up 28-3 going into halftime.”

It was the second time this season the Rebels have risen to a challenge. In their second game of the season at Christian Academy of Louisville, the game was tied at 21-all early in the second half before Boyle scored 35 unanswered points in the second half to win 56-21.

This time, LexCath came to life in the second half after Boyle scored four times in just over 8 1/2 minutes in the second quarter to take a 28-0 lead.

The Rebels expected the Knights to put up a better fight than they did in the teams’ regular-season meeting, which Boyle won 40-0 for the first shutout in 31 games between them. However, Sheperson admitted that the feeling was different when the Rebels took a 28-3 lead to the locker room at halftime.

“I felt good going into the second half,” Sheperson said. “We came out a little slow, and then we got two touchdowns (early in the second quarter) and we were feeling good (at halftime). That’s when their passing game kicked in, and it was all night for them.”

Air check: Did the success of LexCath’s passing attack — particularly in the second half — expose a flaw in Boyle’s defense?

Gohmann and the Knights’ receivers enjoyed a measure of success rarely seen against the Rebels, and Haddix said it will give Boyle something to work on in coming practices.

CAL quarterback Connor Masters had thrown for 294 yards and two touchdowns against the Rebels in September in the only other game in which a Boyle opponent had success with the passing game.

Lanter, one of Boyle’s defensive backs, said there is work to be done by the secondary.

LexCath started quickly moving the ball downfield when Gohmann started moving more, and Haddix said that was something Boyle didn’t see the first time it faced him.

“He moved around and made some great plays throwing on the run, and … the receivers made some great catches. They’ve got a good football team,” Haddix said. “Then they started running the ball. We’ve got to be able to shut down one of them and work on the other.”

His predecessor, Beau Allen, who now plays at Kentucky, passed for more than 200 yards only twice in six games against Boyle. He threw for 308 yards and two touchdowns in his best game against the Rebels in the 2019 regular season.

Friday’s game marked the most points scored against Boyle since its 43-15 loss to Danville on Sept. 2, 2016, and the most yards allowed by the Rebels since Lafayette posted 547 yards in a 47-21 win a week earlier.

Turkey day work: Boyle’s coaches did their best to keep their players sharp during the three weeks of practices between the Rebels’ final regular-season game Nov. 6 and Friday’s game, and the long layoff ended with a memorable practice under the lights.

“The best practice was the Thanksgiving practice at night,” Sheperson said. “That was the best practice all year. We were all hyped, the music was playing. We were stopping on defense and scoring on offense. It was lit.”

Sheperson said the coaches kept things interesting throughout the three weeks of practice — the longest period between games that any of the coaches or players had experienced during a season — by maintaining a high tempo.

“We still wanted to get after it, but we wanted to make it where it wasn’t boring and it wasn’t such a grind,” Haddix said.

“We had some good sessions. I feel like we got better. We added some things on offense, we looked at some things on defense, and we’ve got to continue to do that if we want to improve.”

Lanter said it was a productive period, but nothing topped the 90-minute Thanksgiving night session.

“We came out fired up in practice every day pretty much, but yesterday there was just a different vibe to it,” he said.

Extra points: Boyle’s offense rolled up 512 yards, surpassing 500 yards for the second time this season. The Rebels had 501 yards in their win at CAL. Gillis completed 12 of 17 passes for 282 yards, his second-highest total of the season. He had 342 yards against CAL. Lanter led the Rebels in receptions with six for 104 yards; Sheperson had four catches for a team-high 111 yards.

Sheperson’s receptions included a diving catch in the end zone and a spectacular catch along the sideline for a 35-yard gain that set up Boyle’s final touchdown. On a play that was originally called as a run, he outjumped LexCatch defender J.D. Woodall to catch the ball head high for a catch that he called a “Moss,” as in Randy Moss. “It was a perfect ball. I just had to jump up and go for it. I stopped and jumped over him and caught it,” Sheperson said.

Jackson Smith punted a season-high three times, averaging 36 yards per punt. … Boyle had allowed only 42 points in its previous seven games, including 14 in its last five games. … LexCath didn’t get a first down until its final series of the first half, when the Knights drove 75 yards in 1:51 for a field goal as time expired. … Boyle leads the series with LexCath 19-13 overall and 8-5 in postseason games.

Playoff game two: Boyle will host Rowan, which won the District 4A-6 championship with an 18-6 victory over Boyd County.

It was the first playoff victory and the first district title in 10 years for Rowan (4-3), which hasn’t reached the round of eight since 1992.

The Vikings had lost eight straight postseason games since a first-round win over Madison Southern in 2010. Like Boyle, they had a first-round bye last week following a COVID-19-related cancellation.

Cole Wallace, a senior running back, scored all three touchdowns for Rowan in its win over Boyd, running for two scores and taking a screen pass to the end zone for another. He has rushed for 1,408 yards and 16 touchdowns this season, and he ranked second in Class 4A in rushing yards per game entering Friday’s games.

If Boyle advances to the semifinals, it would host the team with the lowest RPI among the other three semifinalists. Possible opponents for that Dec. 11 game are Allen County-Scottsville, Hopkinsville and John Hardin.