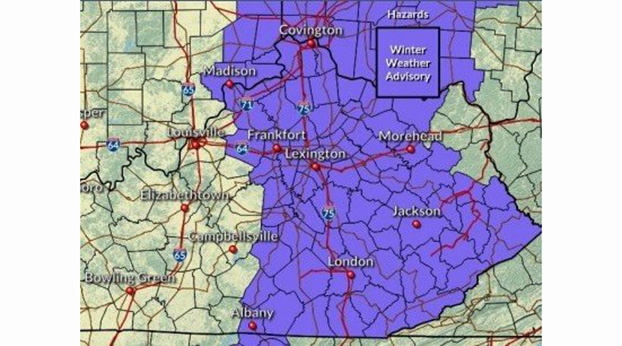 A winter weather advisory has been issued for Monday afternoon into Tuesday morning.

Much of Kentucky is expected to see the first accumulating snow of the season over the next couple days.

The National Weather Service offices in Louisville, Jackson and Wilmington, Ohio, have posted Winter Weather Advisories for central and eastern positions of Kentucky, basically along and east of a line from Milton in Trimble County to Albany in Clinton County from Monday afternoon into Tuesday.

The only exception are the counties in the northeast part of Kentucky which are covered by the Charleston, West Virginia NWS office; although their forecasters say they may end up joining the others with an advisory, late tonight or Monday morning.

Up to two inches of snow are forecast in the advisory area, while some areas in the north and east could end up seeing three or four inches, according to forecasters; especially in the higher elevations of eastern Kentucky.

An area of low pressure over Mississippi is forecast to move to the northeast and into southern West Virginia, prompting the wintry conditions.

In eastern Kentucky the Jackson office says rain will mix with then change to snow Monday morning. Snow accumulations on Monday will be mainly confined to grassy and elevated surfaces as pavement and air temperatures will start out above freezing. As temperatures drop below freezing Monday night, slick spots will develop on untreated surfaces. Snow is expected to taper off by Tuesday morning.

The further north you travel, the more snow you can expect to see. For example, the NWS office in Cleveland has issued a Winter Storm Watch for northern Ohio, where 8-12 inches of snow are possible.

After the snow leaves Kentucky, below normal temperatures will remain. The next chance for a wintry mix will be Thursday and Friday, and another system could visit on Saturday, according to the National Weather Service.