‘On top of the world’: Wray to travel to New York for theater program 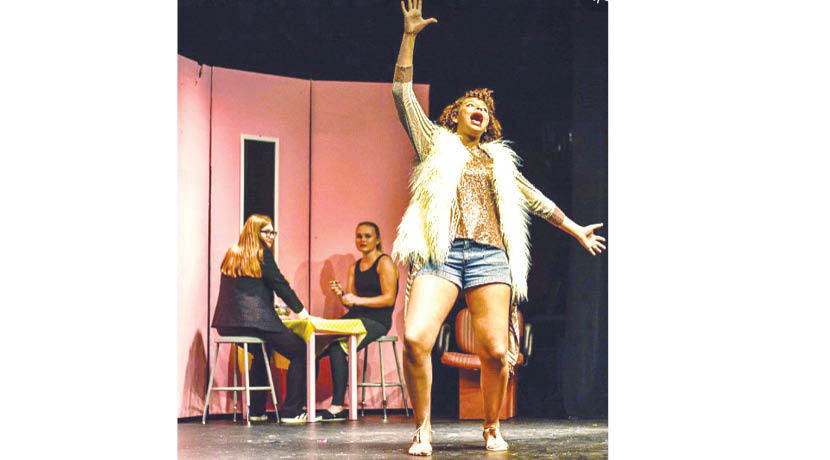 Alyssa Wray is pictured performing as Paulette, a hairdresser, in the musical Legally Blonde. - Photo submitted

Alyssa Wray is headed to the bright lights of New York City.

Wray is the daughter of Perryville councilman Chad Blackwell. He has helped raise Wray since he married her mother 10 years ago. Now, she has an opportunity through the LINK program, which is offered through The Growing Studio, to go to New York City starting in late December and be able to meet with agents, Broadway resident directors, choreographers and artistic directors for seminars and workshops.

Wray is currently a freshman at Northern Kentucky University pursuing her bachelor’s of fine arts degree in musical theater. She’s loved to perform and sing at church since she was about six years old, she said, and she discovered her love of performing in musicals in 8th grade through performing in a High School Musical production.

She said since then, some of her favorite roles have been as Fiona in Shrek the Musical, Elsa in Frozen the Musical, and Audrey in Little Shop of Horrors, among others. She’s performed in shows in Danville and Harrodsburg in whatever shows she could. She also has a TikTok account with more than 66,000 followers and about 1.7 million likes as of Nov. 30 featuring many videos of her singing. She said she was the only freshman chosen for the LINK program this year.

“When I perform, I feel like I’m on top of the world,” she said. “It’s definitely my passion. I’ve always liked to do a multitude of different things, but performing has always been number one in my heart, and there’s multiple reasons. I think a lot of it is that I make a connection with people onstage with me, and I get to make a connection with the audience too, but I’m playing a whole different character, and that’s just really cool to me. And I love to make people smile with my voice or with my performance.”

Wray is pictured with her grandmother Lisa Wray in her Elsa costume when she played the character in the musical Frozen. – Photo submitted

Wray said top agencies in New York will be a part of the program, so she would be lucky to get an opportunity to work with any of them, and this will be a great stepping stone toward a future career for her, which she hopes will be on Broadway. She said she’s excited to learn through the program and work with other students who have a professional and determined attitude toward musical theater.

Wray and other participants will be tested for COVID-19 multiple times in order to be around the other participants, and she and the other students will be housed together at a playhouse and not permitted to leave due to the pandemic. They will wear masks when they are not performing, and agencies will have the option to either come in person or do things virtually.

She said the pandemic has had a large impact for her and other musical theater students. A lot of shows and classes have been virtual and class sizes have been reduced. The mask wearing has posed an issue, too.

“We haven’t gotten the full musical theater college experience,” she said.” It’s really hard taking an acting class with a mask because a large part of it is learning different acting techniques and things and reacting to your fellow scene partner.”

Plays have been canceled, and theaters have been shut down. Wray’s spring senior performance, her “last hurrah” with the people she performed with in high school, was canceled.

“A lot of performers, what we’ve always used as our safe haven —  just go see a show and make us feel better — and we don’t have that ability right now,” she said.

It hurts not to have theater as easily accessible, she said. She also had a bad case of tonsillitis a couple of weeks ago and couldn’t sing for over a week. Without her voice, she said she felt a bit aimless and empty. But now that she has this opportunity and has her voice back, Wray said the program is an “insane” opportunity.

Blackwell, who in addition to being a Perryville councilman also is an owner of Perryville Massage Center, said he knew since Wray was young that she “would do big things.” He was a music leader at their church, and he’d often bring her up to the front with him because he said he knew she had a natural gift.

“I’m very proud and not surprised at all that she has the opportunity that she has, and it’s something we knew for a long time that was a possibility with her,” he said.

Due to the cost of the program and housing involved, Wray has a GoFundMe page where she is accepting donations from those who wish to contribute. To view her GoFundMe page, click here.