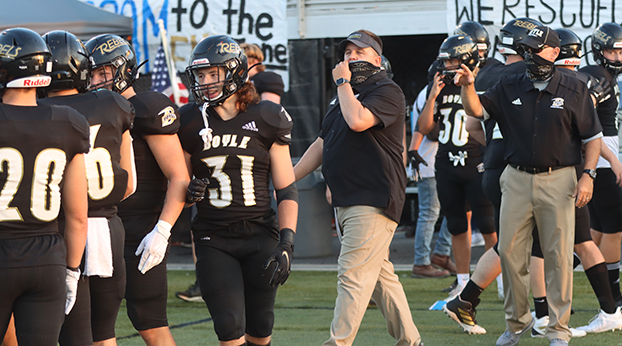 Boyle County coach Justin Haddix and his team advance in the playoffs after Rowan County bows out due to COVID concerns. - Photo by Mike Marsee

Boyle County has advanced to the state football semifinals without playing a down after its third-round opponent was forced to withdraw due to concerns about possible exposure to COVID-19.

Rowan County, which was scheduled to face the Rebels on Friday in a third-round game in the Class 4A playoffs, forfeited the game because its players may have been exposed to COVID-19 in their previous game.

According to a Facebook post by Rowan coach Kelly Ford, the Ashland-Boyd County Health Department confirmed that a Boyd County player had contracted the coronavirus. Rowan defeated Boyd 18-6 in a second-round game last Friday in Morehead.

Rowan players have been forced to quarantine because of their possible exposure to the Boyd player, resulting in the cancellation of the Vikings’ game at Boyle.

“Sorry that our season had to end this way! We all know this was not our plan for the week!” Ford wrote in his Facebook post.

“I know it hurts because it hurts me. Today has been the hardest thing in my coaching career to do. Looking at my kids on the computer screen to give them this info. We preach as coaches, football is more than just a game. It is filled with life lessons. My players saw the hurt and pain that I was feeling when having to deliver the news.”

Boyle has seen one game postponed and three games canceled during this pandemic-affected season, including two postseason games.

Because of this cancellation, the Rebels will be awarded a regional championship and will advance to the semifinal round for the fourth consecutive year.

This is the second cancellation of a third-round game this week. Three second-round games were canceled last week, and 23 teams withdrew from the playoffs prior to the first round. Cancellations after the start of the playoffs have been recorded as forfeits.

The KHSAA made a provision to replace teams that are forced to withdraw from the semifinal and final rounds this season due to reasons related to COVID-19, but there is no such provision in the second and third rounds.

If a team withdraws from the semifinals or finals by 6 a.m. Wednesday prior to its game the same week, it can be replaced in the bracket by the team it defeated in the previous round. If that team declines, another losing team from the same section of the bracket will be offered the chance to play. Teams that withdraw following the Wednesday morning deadline will not be replaced.

Boyle (9-0), which has the highest RPI in Class 4A, will host a semifinal Dec. 11 at Rebel Stadium against the team with the lowest RPI among the other three semifinalists remaining following Friday’s games. If there are no further withdrawals, the possible opponents for that game are Allen County-Scottsville (5-3), Hopkinsville (6-2) and John Hardin (5-2).

Here are the pairings for Friday’s remaining 4A semifinals, with the teams’ RPI rank within the class in parentheses:

Rowan ended an eight-game postseason losing streak with its win over Boyd. The Vikings won their first district championship since 2010 and reached the round of eight for the first time since 1982.

“We have to try and have a positive outlook about the entire year and especially the successful football season!” Ford wrote.