Parksville man is finalist in contest for talented bearded men 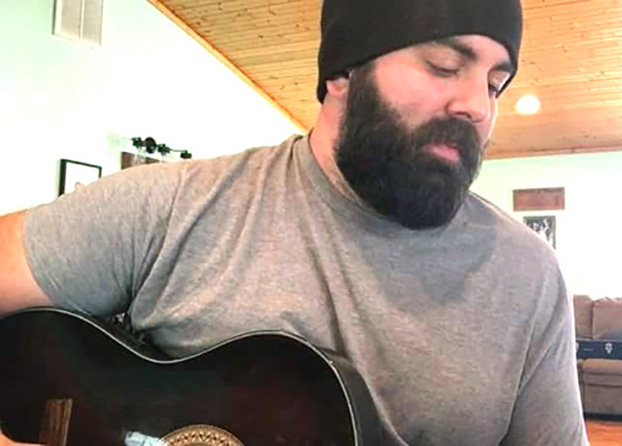 Corbin Musso plays his guitar. Musso is a Parksville resident and one of 10 finalists in Wahl Grooming’s “Most Talented Beard in America” contest. - Photo submitted

In a YouTube video, Parksville resident Corbin Musso plays a guitar and sings a song about a man who has to put his horse down because the horse is old and in pain. Musso wrote the song after a difficult time in life, he said, and the song is about personal responsibility, taking care of the things one has and trying to be the best person one can, but still being OK with feeling the emotion that comes along with responsibility.

This is the video he submitted to Wahl Grooming’s “Most Talented Beard in America” contest, which asks bearded men across the country to showcase their talents. So, of course, Musso sports a beard — a thick, dark one. In addition to making music, Musso is a freelance gunsmith who mostly does custom work and specializes in refinishing and small repairs.

Now, Musso is one of 10 finalists in the contest after “hundreds of hairy hopefuls” across the country submitted into the contest, according to a press release. According to the release, the first-place prize in the contest is $20,000 and the title of “Wahl Man of the Year,” the second-place winner receives $10,000, and the third-place winner gets $5,000. The public can vote for their “favorite bearded performer” until Dec. 9, and winners will be announced on or around Dec. 15, according to the release. 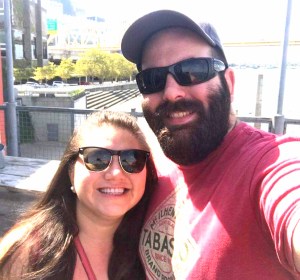 Musso is pictured with his wife, Nancy Musso. – Photo submitted

Musso didn’t enter the contest for the money, he said. He discovered the contest on Instagram and entered as a way to start making music again after he and his wife, Nancy Musso, faced a child dying during pregnancy for the third time. The first two times were in 2018, and the third happened this March.

“I kind of quit music after that,” Musso said. “I didn’t want to play for anybody or anything, and this was kind of a way to get myself out there again, so just clicking the ‘submit video’ button was kind of a win for me, so winning is not really the goal. I already got my win.”

Musso wrote the poem behind the words of the song he submitted into the contest after he and his wife experienced the first two pregnancy losses, had to put down two dogs, had another dog run away, and had some other personal issues. He recorded the music for the song after the third pregnancy loss the couple faced together.

Musso started playing the guitar when he was nine years old, and he started writing songs in high school once he became a better guitar player.

“But most of the songs I wrote were kind of angsty teenager stuff, so I tried to forget all of them,” he said with a laugh. “So I guess the one that sticks out to me the most is the one I submitted because it came after a tragedy, and it was the first song that I wrote after the tragedy, and it just meant a lot to me.”

He mostly writes his own songs when he plays and sings and does all kinds of music, but lately he’s “been into cowboy poetry.” He moved to Parksville from Sacramento, California, with his wife in 2017, the same year they got married. They became Christians before they got married, Musso said, and he said they “heard pretty strongly from God” that they needed to move East. They were going to live in Texas, but Musso got the “strong feeling” he should go see his dad, who lives in Forkland. Musso’s wife Nancy is an Army and combat veteran, and he said he saw her more relaxed on his dad’s porch in Forkland. And in Parksville, Musso took the step to put himself out there with the song and contest after neglecting music for a time.

Watch finalists’ video submissions and learn how to vote for your favorite here.