James Lawson Harlan was among the Boyle County soldiers who served in the Mexican War in the mid 1800s. He enlisted in June 1846, in Captain Speed Frey’s command and fought in battles of Buena Visa and Monterey and throughout the war with distinctions.

Harlan was 59 years old when the government passed a pension bill for Mexican veterans. He and his wife’s share, after he turned 62, got $8 per month in benefits, according to an article in the Advocate Messenger.

Only three veterans — General S.S. Fry, James L. Allen and W.A. Harness were eligible to draw the pension at that time.

However, Fry was drawing a larger pension for disabilities incurred in the Civil War which precluded him from sharing in the Mexican bill.

The others were members of the “Boyle Blues” of Captain Fry’s unit.

The Boyle Blues belonged to the 2nd Kentucky Infantry, commanded by Colonel William R. McKee and Lieutenant Colonel Henry Clay Jr., both of whom were killed in the Battle of Buena Vista.

Nine other companies of the unit were from Mercer, Green, Lincoln, Kenton,Jessamine and Franklin counties.

General Fry said the captains of each unit drew for who should command in the event of the death of a superior office, adding “a fool for luck.” However, the war ended before the promotion went into effect.

After the war Harlan came home and resumed farming and trading, which he successfully followed until a short time before his death in 1904.

In 1895, nine years before he died, Harlan sold his 200-acre farm located two and half-miles west on Lebanon Road. Sixty acres were woodland. The farm contained two large barns, a dwelling “good enough for a prince to live in.” 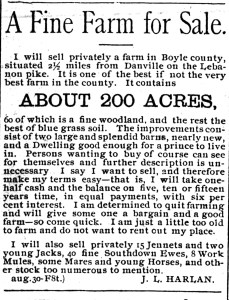 An advertisement that appeared in the Aug. 20, 1895, edition of the Kentucky has information about the sale of James Lawson Harlan’s Lebanon Road farm. Harlan was a Mexican War veteran, a farmer and large landowner.

When the farm sold, Harlan privately sold 15 Jennets and two young Jacks, 40 southdown ewes, eight work mules, along with mares and young horses and other stock.

In politics, James was a staunch Democrat, and prior to 1865 was a strong supporter of the Whig party.

James and his wife, Lettie Maxwell, whom he married in Marion County, had 10 children. She was born in 1836 and died in 1894. Both are buried in Bellevue Cemetery.

The 1880 Boyle County Census show James and Lettie’s children were:

Elijah “Bud” Harlan moved west in 1884, and died on Feb. 23, 1887, in Whiting, Kansas from pneumonia while caring for livestock during a snow storm.

Though a long way from home, he was among friends who nursed him when he was sick.

However, “All that skill and friendship could not undo what was done.” Elijah died a few days later at the age of 26.

His body was brought back to Danville and was buried in Bellevue Cemetery.

After moving West, Elijah had a successful farm and produced cattle and other stock.

“His habits were good — temperate, moral, generous, industrious and brave,” according to his obituary.

“He soon became popular in his new home, for he made friends readily, and won and sustained the respect of the community. Everyone with whom he came in contact, whether socially or in business, formed a liking to him.”

The summer before Elijah died, some of his cattle were stolen. In answer to a reward, officers arrested an older man who was convicted. Since the man was old, Harlan offered to waive the sentence and parole him if he told who the gang was who wanted the cattle. The old man refused.

Elijah then asked the court to give the man a lower sentence, which was granted.

Friends in Danville remembered Elijah as the “noble, generous and kind-hearted Bud Harlan,” according to The Advocate.

All who wander are not lost