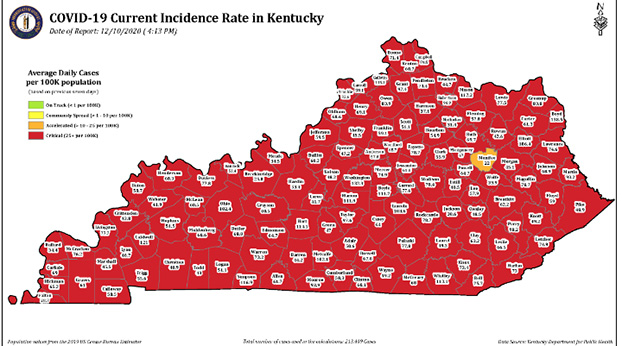 He reported the state’s highest-ever number of new COVID-19 cases; however, the state’s positivity rate declined for the seventh straight day.

“When we talk about COVID being a fast-moving train, it doesn’t just immediately turn; you have to slow it down, stop it, and turn it around. We still believe that’s what we’re seeing,” said Gov. Beshear. “We may also be seeing some of the impact from Thanksgiving in these numbers, that we could be moving in the right way, but still, Thanksgiving has a major impact. I can tell you that if we are seeing Thanksgiving’s impact, it’s a lot less than what we are seeing in some other states.”

On Dec. 14, Kentucky’s public health restrictions and recommendations will include:

• All public and private middle and high schools will continue remote instruction until Jan. 4, 2021. Elementary schools can return to in-person learning once their county is out of the red zone.

• Restaurants and bars can reopen at 50% capacity. Masks are required except when actively drinking or eating. Service must stop at 11 p.m.; establishments must close no later than 12 a.m.

• Gyms, fitness centers, pools, and other indoor recreation facilities can operate at 50% capacity. Masks must be worn while exercising.

• Venues, event spaces, and theaters can reopen at 50% capacity.

• Professional services can operate with up to 50% of employees working in-person; however, all employees who are able to work from home must do so.

The Governor shared positive economic development news, more evidence that the Commonwealth will be prepared to sprint out of the pandemic in 2021.

Beshear and executives from Protective Life Corp. announced the company will relocate its core site in the greater Cincinnati region to Covington. The new location positions Protective Life for long-term employee and business growth. The initial move to RiverCenter Towers will bring approximately 100 well-paying jobs to Kentucky in 2021. As the company grows over the next decade, leaders expect to more than double that employee count.

In addition, in a win for Kentucky’s growing agritech sector, Gov. Beshear and leaders from EnviroFlight LLC announced the company’s plans to add 40 jobs in Maysville with a nearly $20 million expansion. EnviroFlight, which produces black soldier fly larvae for animal and plant nutrition, established its Kentucky production facility just two years ago.

“With these hospitalization and ICU numbers, you start having to make more difficult choices, including having to postpone or defer surgeries or procedures for patients who would have to stay in the hospital afterwards,” said Dr. Stack. “For example, people who have large aneurysms in their aorta come into the hospital, have a major surgery oftentimes, and may have to stay in the hospital for multiple days. If it’s not an immediate emergency, hospitals may have to postpone that kind of surgery because they have so few beds available.”