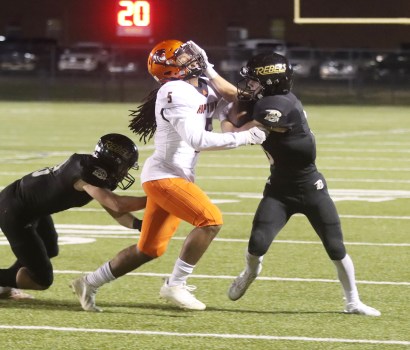 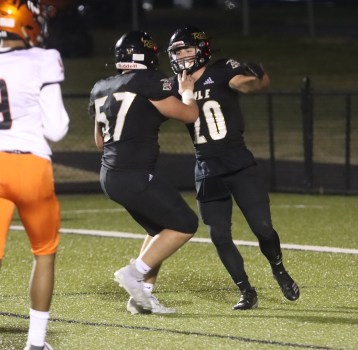 Will McDaniel (20) celebrates with Boyle County teammate Jake Hester (57) as Hopkinsville’s Alijah Watts looks on following McDaniel’s 12-yard touchdown run during the first quarter Friday. It was one of three rushing touchdowns for McDaniel in the first quarter. - Photo by Mike Marsee 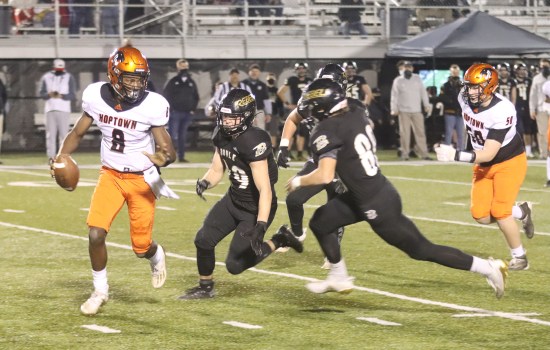 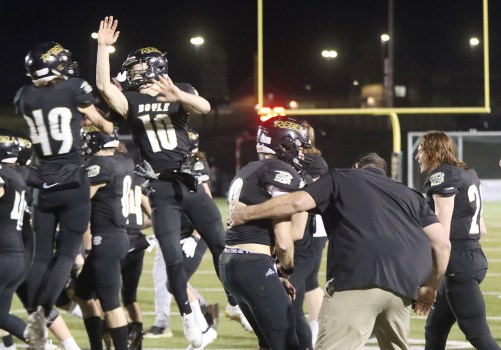 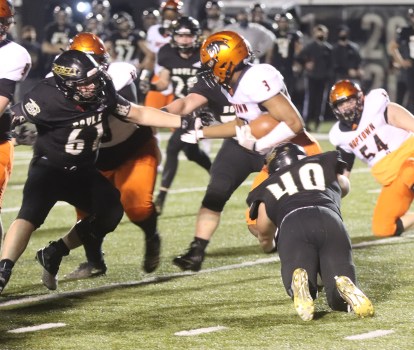 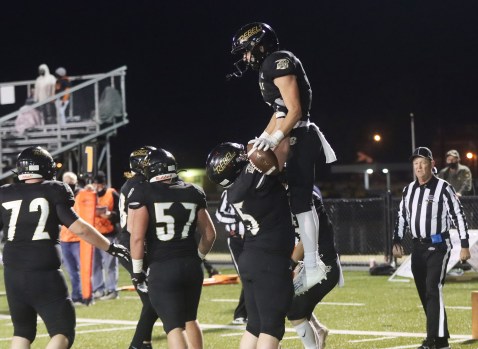 Cole Lanter of Boyle County gets a lift from teammate Zach Mason as the Rebels celebrate following Lanter’s 9-yard touchdown reception during the second quarter Friday. - Photo by Mike Marsee 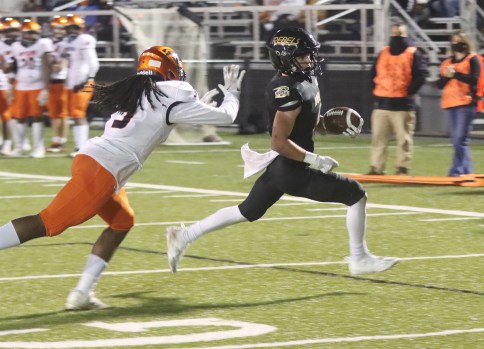 It was a long road back, but Boyle County had plenty of fuel for the trip.

Powered by the pain of a loss in last year’s state finals, driven by a desire to prove they could overcome heavy graduation losses and turbocharged by the talent to dominate most of their opponents, the Rebels put themselves in position to compete for another championship.

And when they got within one win of securing a return trip to Kroger Field, they weren’t going to let anything stand in their way.

Boyle flattened Hopkinsville 55-0 Friday night at Rebel Stadium on the final segment of the road to Lexington, cruising through its Class 4A semifinal to earn another chance at the championship that eluded it last season.

The Rebels left Kroger Field disconsolate a year ago after a one-point loss to Johnson Central in the 4A title game, and there are plenty of players remaining who remember what that loss felt like.

“Last year when we left that field it was heartbreaking. … That’s one of the worst feelings I’ve ever felt,” Boyle offensive lineman Paul Brown said. “But now with us being able to go back, it’s exciting, it’s just — it’s awesome.”

Boyle (10-0) posted its fourth shutout victory and its seventh mercy rule win of the season to advance to the state finals for the 11th time in school history — all in the last 22 seasons. The Rebels will attempt to add a ninth championship to their collection when they face Franklin County next Friday in the Class 4A final.

Boyle had played only one game in the previous 37 days, and the played only once in the first three rounds of the postseason after their first- and third-round opponents opted out or were forced to withdraw for reasons related to the COVID-19 pandemic.

Coach Justin Haddix said it was evident before the Rebels took the field that they were ready to roll.

“There was a little different look in their eyes in that locker room,” Haddix said. “You could just sense the focus on what they were doing. (They had) one goal, and they played for each other.”

Boyle jumped on Hopkinsville twice, first scoring three times in just over three minutes in the first quarter to take a 20-0 lead that grew to 33-0 by halftime, then throttling the Tigers again in the third quarter to finish the fight in a way they had not in their preceding game.

Two weeks earlier, Boyle led Lexington Catholic 28-3 at halftime but gave up 38 points in the second half before winning 49-41. It was a different story Friday, as the offensive starters were taken off the field barely three minutes into the second half to applause from the socially distanced fans in the home grandstand.

The Rebels pushed Hoptown (7-3) aside by amassing more than 500 yards on offense for the second straight week and by holding the Tigers’ offense to 80 yards.

Hoptown went three-and-out on its first three series, netting minus-7 yards, and on six of its first eight possessions.

The Tigers struggled to establish the run: They had minus-7 rushing yards in the first quarter. The passing game was a problem, too: Quarterback Treyvon Jefferson’s first six passes were incomplete, and three of them were dropped by receivers.

“We were out here all week getting ready, getting every single look that they could possibly give us. … And quite honestly, I think we were just better than they were in the end,” Boyle defensive lineman Benjamin Rush said.

Rush had four of five sacks by the Boyle defense, which held Jefferson to 99 yards on 7-of-20 passing and held Jayden Dillard, Hoptown’s leading rusher on the season and in this game, to 6 yards on seven carries.

“We were trying to limit the big play,” Haddix said. “We had to do a good job of not letting them big-play us and making them drive the football.”

For only the third time this season, Boyle’s offense got more yardage on the ground than through the air.

The Rebels ran for 296 yards, averaging 8.4 yards per carry behind Will McDaniel, who carried the ball 17 times for 141 yards and scored all three of Boyle’s first-quarter touchdowns on runs of 6, 12 and 38 yards.

Quarterback Jagger Gillis completed 16 of 20 passes for 222 yards and two touchdowns, and Cole Lanter had the highest number of receptions by a Boyle player this season with seven catches for 95 yards and one TD.

The offense started inauspiciously, as the Rebels went three-and-out on their first possession with a fumble and a net gain of just a single yard before one of only two punts on the night. Brown said a quick video session following that series energized the offensive line.

“Once we got back and sat down in the tent, we were just having to look over the plays and what happened, and with that we just got together and we were like, ‘Boys, we’ve got to come back out strong,’” he said. “We started off slow in a bunch of games this season, but we can’t have that happen going into state.”

Lanter and Luke Sheperson caught touchdown passes in the second and third quarters. Gillis had a rushing touchdown late in the first half, and Eli Glasscock and Cas Phillips ran for second-half TDs.

Hopkinsville, meanwhile, never approached the Boyle end zone. The Tigers got as far as the Boyle 40-yard line late in the first quarter before Jefferson threw a long pass that was intercepted by Lanter at the 2. They reached the 41 early in the fourth quarter but turned the ball over on downs after consecutive sacks.

The Rebels are not the same team they were a year ago. They have a number of new faces in key roles after losing 19 seniors, and they have a new coach in Haddix.

Most preseason rankings placed them among the top teams in Class 4A — though not at the top — but they have thrived this season by casting themselves as underdogs and unlikely to get another shot at a title.

“It’s really special,” kicker Jackson Smith said. “We graduated (all those) seniors last year, and nobody thought we’d be back here where we are today. But we put in a lot of hard work in the offseason and one thing led to another, and here we are.”

Haddix said what so many of his players already know: getting back will not be enough.

Rush said he was having a good night at a good time, and getting plenty of help from his teammates.

“I was just trying to play with speed,” he said. “Their tackles could not keep up with me, and then once I got in the backfield we had our linebackers coming downhill, playing hard, They were just opening stuff up for me, I was opening stuff up for them, and I think we had a really good thing going tonight.”

Rush now has seven sacks, and the Rebels have 30 in all.

“It tickled me to death, but I’m just happy to be out here with my brothers doing what we love, surrounded by a group of people that have had my back since elementary school,” he said.

Rush said he’s happy that he and his teammates can carry on the tradition of Boyle’s program by continuing to compete for championships.

“I’ve played football in Boyle County since I was in the third grade. I’ve been coming to Friday night games as long as I can remember,” he said. “It’s the respect that they’ve built for this program and all of us boys, and just to know that we’re doing it honor and we’re doing it good, that gives us a feeling that we can’t describe with any words.”

Kicking and covering: Kicker Jackson Smith became the ninth Boyle player to recover a fumble this season when he fell on a loose ball at the Hopkinsville 25-yard line, 35 yards downfield from where he had just kicked off following the Rebels’ first touchdown of the second half.

“I was just doing my job, putting the ball in the corner. Then one of our guys made a tackle and I was lucky enough to be there for the fumble recovery,” Smith said.

Smith acknowledged that it was an unusual play for him.

“I’m just doing whatever I can for my team,” he said. “It’s out of the ordinary, especially me being a kicker.”

Regarded as one of the top kickers in the state, Smith had his struggles Friday. He missed his first two extra-point attempts and a 38-yard field-goal attempt at the end of the first half. However, he bounced back to make his last three extra-point tries.

“I got my confidence back,” he said. “I’m looking forward to next week, and I’ve got a lot of work to do.”

Entering Friday’s game, Smith was 47 of 49 on extra points and 3 of 3 on field-goal attempts.

He said his preference would be for another Boyle blowout next week, but short of that, he said he’d love to be called upon for a clutch kick.

“Whatever our team needs,” he said.

Extra points: Gillis and Phillips rushed for 53 yards each for Boyle. … Sheperson caught four passes for 68 yards and had one sack for the Rebels. … Boyle’s senior class finished 29-0 at Rebel Stadium and is 51-3 overall with three state finals appearances … The Rebels are 11-2 in state semifinal games and 8-2 in the state finals. … Boyle is one of four teams who are returning to the state finals after playing at Kroger Field last season. The others are Trinity (6A), Male (6A) and Paintsville (2A).

Finally, the finals: The 4A final between Boyle and Franklin figures to be a compelling matchup between two teams with prolific passing games and stingy defenses.

And while the Rebels cast themselves as underdogs, the Flyers are the bigger surprise to reach the title game even though they have enjoyed considerable success in recent years.

Franklin (9-1), playing in the semifinal round for the first time since 1979, ended Johnson Central’s run of five straight state finals appearances by beating the Eagles 20-12 on Friday in Paintsville. The Flyers led 20-0 before giving up two fourth-quarter scores, then got a turnover in the final minute to secure their first trip to the finals.

The Flyers’ only defeat this season was an 18-16 loss to Central, but they avenged that with a 42-6 win in the second round of the playoffs. They also blew out Shelby County and Allen County-Scottsville in the postseason before holding off Johnson.

Franklin has lost only twice in the past two seasons, both times to Central.