Cats get off script, fall behind early as rally comes up short against Irish 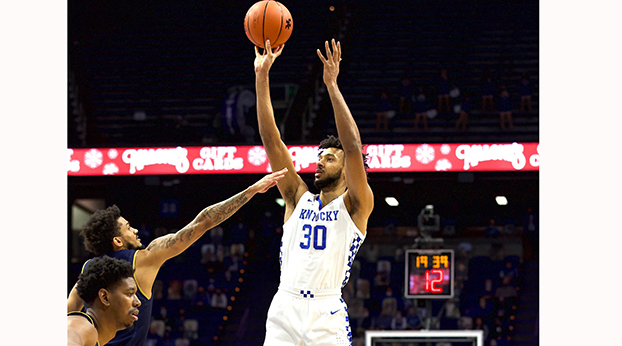 Kentucky tried to rally its way past Notre Dame but a second-half comeback fell short in a 64-63 setback Saturday at Rupp Arena.

The Wildcats (1-4) fell behind by 24 points at 33-9 in the first half and trailed 48-26 at the half before mounting a comeback in the second half. Kentucky outscored the Irish 37-16 in the half and had a chance to cap the rally in improbable fashion, but Olivier Sarr’s jumper from the right corner bounced off the rim as time expired.

The game-winning attempt wasn’t the look Kentucky coach John Calipari sought at the buzzer, especially moving without the ball prior to Sarr’s jumper.

The loss was the fourth in a row for the Wildcats who had lost two of their previous three games by double digits, including a 79-62 setback to Georgia Tech last Sunday in Atlanta. It also marked the first time the Wildcats have lost back-to-back games at home in John Calipari’s 12 seasons as coach at Kentucky.

“We had guys who didn’t follow the script and who have never followed the script,” Calipari said. “All of a sudden there is open three, open three, and open three. What in the world? In the second half, we played the guys that were playing the script. I took some guys out, we made a little run and we believed. … We picked up the press and became the aggressor.”

Calipari’s message to his squad at the break was to simply win the second half and the Wildcats did just that, outscoring the Irish 37-16 to make things interesting down the stretch. The rally gave Calipari and his staff optimism moving forward.

“There’s hope now,” Calipari said. “If that’s who we are (during those last) 20 minutes, now we’ve got to play 40 minutes. I like the fact that we came back, (played) tough, and did some good stuff.”

“Olivier was terrific,” Calipari said. “We’re not even in the game without (him) and (he) gave us a presence and got us open threes (in the second half) because we were able to throw it to him.”

A big difference for the Wildcats, Sarr said, was the team’s sense of urgency.

“That second half is a good lesson and we have to keep at it,” Sarr said. “We’ve to keep going like that every game.”

Calipari said his team’s defensive breakdowns in the first half led to a letdown and allowed Notre Dame to build a double-digit lead that blossomed into the Wildcats’ biggest halftime deficit in history at Rupp Arena.

“We had a guy that broke off the game plan,” Calipari said. “We spent a couple of days on it because we had time and then he walked into the game and went the wrong way, ran the wrong way and they got 12 points (on threes). All of a sudden the rim is like an ocean. That’s what happened to us at Georgia Tech.”

In addition to Sarr, Calipari liked the way Terrence Clarke performed and indicated more could be in store from the freshman at the post-guard slot.

“I like Terrence at point guard and I like having his hands on the ball,” Calipari said. “I like him at the point. Davion (Mintz) and Devin (Askew) have got to shoot balls. They passed up the open shots.”

The Wildcats return to “Camp Cal” before taking on UCLA Saturday in the CBS Sports Classic in Cleveland.

“We made strides and now we move on,” Calipari said.