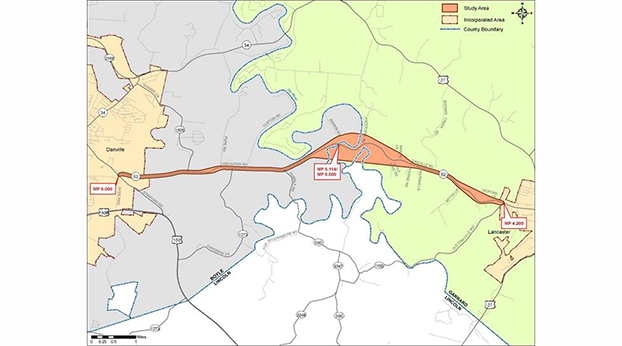 Ky. 52 being studied for possible improvements

Lancaster Road, also known as Ky. 52 between Danville and Lancaster, is being studied as to how its traffic safety can be improved and the public’s input is needed.

The Kentucky Transportation Cabinet initiated a study of the corridor with consultant engineering firm Qk4, Inc. in August of this year. The team has been working to identify existing conditions and now is asking the public’s opinions as to their safety and traffic concerns within the study area, according to a KYTC news release.

The study will use engineering and traffic data – both now and projected to 2045 – and public input to help develop possible short- and long-term highway improvements for the narrow, two-lane highway.

However, other than small-scale safety fixes, no future funding has been identified to implement any study recommendations, according to the release.

Another round of public involvement during spring 2021 will collect their input on any proposed improvements.

The survey should be completed by Jan. 15, 2021. For additional project information, you may contact the KYTC District 7 project manager, Casey Smith, at (859) 246-2355 or email Casey.Smith@ky.gov.

In an interview, Smith said, “This portion of KY 52 is part of an improved and safer connection from Danville to I-75, which has been envisioned for years. Being a safety corridor, the objective of this study is to identify locations that are problematic. In addition, it is also to identify potential short and long-term solutions that can be further evaluated in future preliminary design phases.”

Smith said, “State transportation officials, as well as local officials, have received a considerable amount of concerns expressed for this corridor.” The majority of the concerns have been regard to narrow lanes and sharp curves of the road.

From information already gathered, the most problematic portions of the corridor include:
• The intersection of Ky. 52 at Hubble Road
• The section of Ky. 52 up/down the Dix River
• A small bridge crossing over Clarks Run in Boyle County
• An S curve in Boyle County that has been an area with multiple single vehicle crashes
• There is also the general concern of Ky. 52 being narrow, with little to no shoulder width

However, Lassiter explained, “While it is one of most beautiful leisure drives in Central Kentucky, it is also the least improved given its narrow, winding, and hilly conditions for daily commuter traffic.”

Also, the corridor, “is one section of a route that could provide Danville with another improved access point to I-75 at the Duncannon Lane/Exit 83 in Madison County.”

Lassiter said that Ky. 52 has already been improved from Lancaster, east past Paint Lick. “ I understand that the next phases include both a Ky. 52 bypass of Lancaster and an improved alignment from Lancaster west to Danville. That would open a new corridor for commerce to our community’s economy.”

Though he’s not a road engineer, Lassiter said, “From a layman’s point of view, a new Ky. 52 between Danville and Lancaster should be widened and straightened with more consistent elevation and better site distance. This would also be a remarkably beautiful route to include a walking/biking path along the entire length of the section between Danville and Lancaster, similar to the improvements to US 68/KY 80 through Land Between the Lakes in Western Kentucky.

However, any major improvements to Danville-Lancaster corridor would be quite expensive.

“For any new alignment, my concern will be the cost for improvement, the available state funding for construction, and the timeline for completion.”

Lassiter added, “Specifically, the greatest cost along the route from Lancaster to Danville is where a new bridge will be reconstructed across the Dix River. Bridge replacement is most often the single greatest expense of road construction, as the Spears Creek bridge was for KY 2168.

“The river course meanders widely along the Boyle-Garrard border, and there are very few areas where a new road may be constructed that will require only one bridge rather than two. In fact, the current bridge location may be the only viable spot where a one-bridge solution is possible. This will be a major challenge in managing the cost of this project.”

Another factor that will affect the state’s road study is the proposed development of more than 300 acres that was purchased by the Luca Mariano Distillery, which is located on Ky. 52 near Stanford Road, Lassiter explained. Once the distillery is up and running, “it presents an opportunity for increased business and tourist traffic on the east side of town.”

A short survey is available at https://www.surveymonkey.com/r/96RYKHY which concludes with an opportunity to place points on an online mapping portal to enter location-specific data about existing traffic and safety concerns.

You can also take the survey by scanning the QR code with your smartphone or mobile device.

One in 10 public health workers have quit during pandemic

Local public-health officials and workers “have found themselves at the center of a political storm as they combat the worst... read more