One in 10 public health workers have quit during pandemic 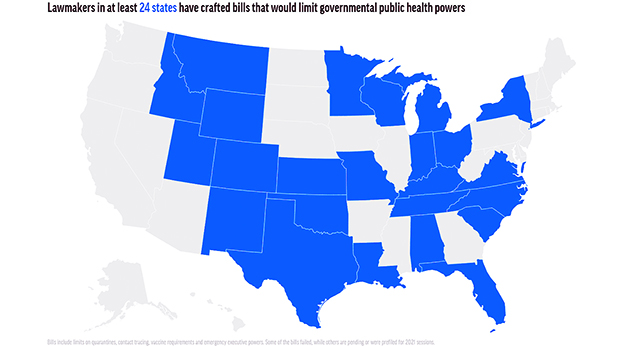 In Kentucky from March through Nov. 21, 189 local health-department employees, about 1 in 10, left the payroll, according to Sara Jo Best, public-health director of the Lincoln Trail District Health Department in Elizabethtown.

Local public-health officials and workers “have found themselves at the center of a political storm as they combat the worst pandemic in a century,” and one in 10 in Kentucky have left their jobs for one reason or another, Kaiser Health News and The Associated Press report.

“Amid a fractured federal response, the usually invisible army of workers charged with preventing the spread of infectious diseases has become a public punching bag. Their expertise on how to fight the coronavirus is often disregarded,” write Anna Maria Barry-Jester, Hannah Recht and Lauren Weber of KHN and Michelle R. Smith of AP.

“Some have become the target of far-right activists, conservative groups and anti-vaccination extremists, who have coalesced around common goals — fighting mask orders, quarantines and contact tracing with protests, threats and personal attacks. The backlash has moved beyond the angry fringe. In the courts, public health powers are being undermined. Lawmakers in at least 24 states have crafted legislation to weaken public health powers, which could make it more difficult for communities to respond to other health emergencies in the future.”

“What we’ve taken for granted for 100 years in public health is now very much in doubt,” Lawrence Gostin, a public-health law expert at Georgetown University, told one of the reporters.

It’s too much for some in public health. “At least 181 state and local public health leaders in 38 states have resigned, retired or been fired since April 1,” according to the reporters’ ongoing investigation. “According to experts, this is the largest exodus of public health leaders in American history. An untold number of lower-level staffers has also left. . . . Many of the state and local officials left due to political blowback or pandemic pressure. Some departed to take higher-profile positions or due to health concerns. Others were fired for poor performance. Dozens retired.”

In Kentucky from March through Nov. 21, 189 local health-department employees, about 1 in 10, left the payroll, according to Sara Jo Best, public-health director of the Lincoln Trail District Health Department in Elizabethtown. “She said workers are exhausted and can’t catch up on the overwhelming number of contact-tracing investigations, much less run Covid-19 testing, combat flu season and prepare for Covid-19 vaccinations.”

Gov. Andy Beshear has said that public-health workers and officials are targets of harassment or abuse daily.

Dr. Howard Markel, a medical historian at the University of Michigan, told one of the reporters,
“I’ve never seen or studied a pandemic that has been as politicized, as vitriolic and as challenged as this one, and I’ve studied a lot of epidemics. All of that has been very demoralizing for the men and women who don’t make a great deal of money, don’t get a lot of fame, but work 24/7.”