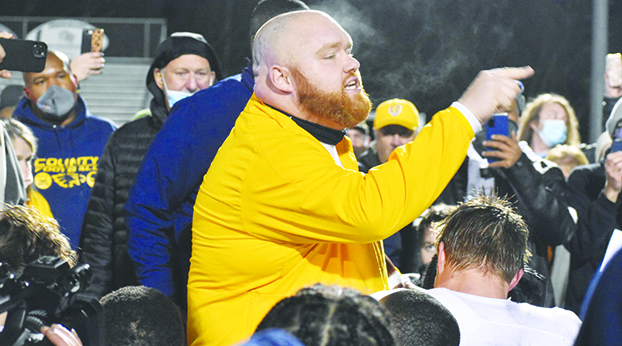 By Linda Younkin
The State Journal

Eddie James always knew Franklin County was where he wanted to be.

James, in his fourth year as FCHS’ head football coach, spent two years as an assistant coach at Boyle County.

Franklin County and Boyle County meet Friday for the Class 4A state championship at the 2020 UK Orthopaedic State Football Finals at Kroger Field in Lexington.

“I think it was being around a coach the caliber of Chuck Smith,” James said about the move. “He was a proven winner with state championships, and I think it was just challenging myself that drove me to do it.”

It proved to be a worthwhile endeavor.

“A big part of what I learned from Coach Smith is how to build a championship culture, a culture of kids who play hard, compete and love football,” James said. “I’m not saying they didn’t do that here, but I got to see it from a different angle, with the opportunity to learn from someone who’d won something like six or seven state championships.”

James and his wife, Nikki, didn’t move to Danville. Their daughter, Ava, was born in 2014.

“You understand the long hours coaches put in,” James said. “I missed so much with Ava and Nikki. It was important to me to coach, but I wanted to be more present at home.

“That’s the beauty now. I’m five minutes from home. Nikki works here, and I get to see our kids. (Their son Jax is 3 years old.) My drive time is five minutes, and when I was at Boyle County it was 50 minutes from school to driveway.”

James returned to FCHS for the 2016 season, serving as an assistant under interim head coach Nick Sheridan, and he was named head coach prior to the 2017 season.

“It means the world to me,” James said about coaching at his alma mater. “I wouldn’t be sitting here today if it wasn’t for my high school coach (Donny Walker). Mentoring and leading are things I take very seriously.”

“I used to walk around with a notepad jotting stuff down,” James said about his time at Boyle County. “It wasn’t just Coach Smith, but there were several coaches who had won state championships. I tried to be a sponge.

“We beat some good teams to get here, and we’re playing a great team Friday. As a coach, you coach for this opportunity.”