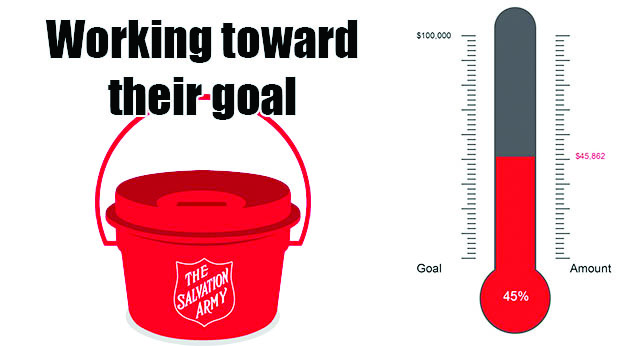 This is according to Lt. Lindsey Galabeas, who is core officer of the Salvation Army in Danville, which serves Boyle, Casey, Garrard, Lincoln and Mercer counties. She said one of the reasons the drive is falling behind is because a lot of the volunteers are older people, many of whom are retired and have time to volunteer, and since older people are the most heavily affected by COVID-19, they’re doing their best to stay safe.

“But obviously the Salvation Army is really known at Christmastime with the bells out there — it’s really known for the kettle season during this time, so it’s really our best chance to get these funds,” she said.

The money from the Red Kettle Drive also makes up 15 to 20% of the organization’s budget. So when they can’t get what they need from the drive, Galabeas said the organization has to make cuts, which she said will potentially need to be done if an additional fundraiser doesn’t go well.

And the Salvation Army has valuable programs that could potentially face cuts or simply not happen, she said, like the organization’s summer day camp and the after-school program, which didn’t happen this year because of COVID-19 but are hoped to be resumed.

Or, she said, rent and utility assistance to people in need could face cuts. This year she said the Salvation Army received COVID-19 relief funds, but they ran out in September. And though the organization saw less demand when people were receiving their individual COVID-19 relief money, also known as “stimulus” money, and when evictions and utility cutoffs were paused, the organization saw a spike in demand when those penalties were back in place.

Galabeas said the Salvation Army also offers several other services like a food pantry for the five counties served in the area, vouchers on clothes and furniture, and church groups. She said the community has done an excellent job supporting the Salvation Army and encourages people to continue to donate.

Ready for a rematch: Boyle-Franklin matchup has recent history