Santa doesn’t want to bring the virus this year 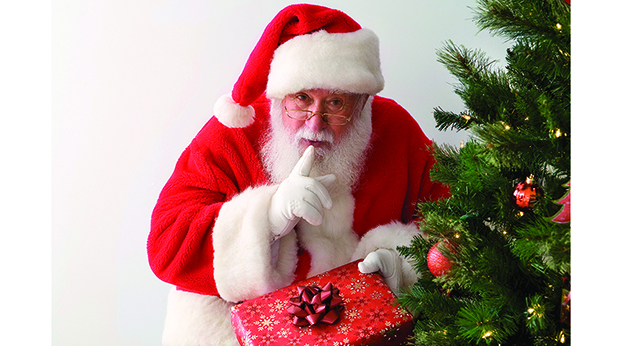 A few days ago, our nation’s leading infectious disease expert, Dr. Anthony Fauci, declared that Santa Claus was exempt from COVID-19 because of all the good qualities that he possesses, as well as his innate immunity.

But then we later we learn in the New York Post this past Monday that Santa visited a nursing home in Belgium and was responsible for spreading more than his good cheer with his visit — leaving at least 75 people infected with COVID-19, according to local TV.

The alleged super-spreading St. Nick was one of the first to fall sick after his visit, followed by 61 elderly residents and 14 staff. Staff initially insisted that Santa — who allegedly may have been the son of one of the residents — wore a mask and adhered to safety protocols, as did those who met him. However, photos of the meet-and-greet quickly proved that to be untrue.

Not knowing for certain if this was the true Santa or one of his helpers, as your local concerned riskologist, I took it upon myself to contact the North Pole to offer up my services to better protect Santa and all the families he will be visiting from this COVID-19 pandemic.

To my relief, I later received word that Santa and his elves have done an excellent job quarantining in the North Pole. Toy production in the North Pole has remained on pace after a short shut down to install plexiglass around all the workstations, distribute PPE, to establish social distancing guidelines, and to conduct all the new safety training is required for COVID-19.

I was told that the elves were all currently feverishly wrapping gifts, because Santa will need to wrap presents for nearly two billion children globally before Dec. 25. According to an article in factretriever.com titled Santa Claus Facts, if on average each child’s presents take 31.5 inches of wrapping paper, Santa needs about 1.6 million miles of wrapping paper. That is enough to wrap around the world 60 times.

I later learned that to best protect Christmas, Mrs. Santa decided to take extreme drastic measures and declared a no-fly zone above the north pole and then closed off all the surrounding borders to protect Christmas. Polar Bears are even being re-routed away from the North Pole.

Given Santa’s age and weight, Mrs. Clause recognized early in the spring that this pandemic would put Santa at high-risk group for severe illness from the virus.

As a result, she imposed extreme travel restrictions on Santa, but to keep with the tradition she worked out a contingency agreement with Santa University in Arvanda, Colorado, to have hundreds of look-alike Santa helpers to fill in for his absence, to help work all the malls all across America.

To best protect all involved, with the help of an insurance agent that I know, a hold-harmless agreement was signed, and the university was added as an additional insured on the North Pole policy, but additional safety measures have been developed to best protect all these Santa surrogates.

Even if the children have been naughty or nice, all will not be able to visit Santa like in the past. Kids will not be able to sit on his lap and will have to socially distance themselves. Kids will instead tell Santa what they want for Christmas from six feet away and sometimes from behind a sheet of plexiglass.

All kids and visitors will need to wear a face mask, even while posing for photos. And some malls will put faux gift boxes and other decorations in front of Saint Nick to block kids from charging toward him.

If you go to see Santa, he may be wearing a clear plastic face shield and he just may be sitting behind a glare-free acrylic barrier where a Santa helper will be spraying down the barrier after each visit.

Other safety measures include online reservations to cut down on lines, workers wiping down holiday-decorated sets, and plenty of hand sanitizer being made available. Some malls have indicated that they may also cut Santa’s hours are also getting cut to give him a break from crowds.

In New York, Macy’s actually had to cancel its in-person Santa visits this year, saying it couldn’t provide a safe environment for the more than 250,000 people who show up to see Kris Kringle at its flagship store.

Many malls understand the draw that Santa brings, and they are not prepared to kill a holiday tradition that goes as far back as the late 1800s and are keeping Santa visits to help attract people back into the hallways.

According to a CBS news article titled, “Santa Will Grace Customer-Hungry Malls Despite Pandemic,” more than 10 million U.S. households visited Santa in a mall or store last year, according to GlobalData Retail’s managing director Neil Saunders. “Nearly 73 percent of them also spent money at nearby restaurants or stores, he said. Santa is the magnet that attracts people to malls and without that attraction, malls will struggle more to generate foot traffic.”

To offset this exposure and to continue to help spread the Christmas cheer during this pandemic, Santa will offer himself virtually online at jigglering.com. Where kids can call and ask Santa personally for that special toy that mom and dad cannot afford.

On the night of Christmas, the real challenge begins. Mrs. Claus was able to impose a healthy choice diet over the summer helping Santa to lose a good 20 pounds. Recently he has bulked back up in anticipation of his Christmas journey.

With more than 2.1 billion children in the world and an average of 2.5 children per household, Santa must make 842 million stops on Christmas Eve. So if you assume that if each household in the whole world were to leave out two chocolate chip cookies for Santa on Christmas Eve, he would potentially eat 374 billion calories, 33,000 tons of sugar, and 151,000 tons of fat in one night.

So for the sake of Santa’s health during this pandemic, Mrs. Claus is asking that each household instead leave out some carrots and celery sticks, which Santa could then also share with Dasher, Dancer, Prancer, Vixen, Comet, Cupid, Donner, Blitzen, and of course Rudolph The Red Nosed Reindeer.

It is estimated that Santa will be visiting nearly 139 million homes this year just in the U.S. alone and given some of the COVID restrictions that many Governors have placed in several states, he has been declared the ultimate super-spreader and will have a government observer ride along with him on his sleigh to remind him of these strict restrictions.

As a result, Santa will not be able to come down every chimney this season and will have to remain outside. He will instead be leaving your presents at your designated delivery spot.

If you do not have to have a designated delivery spot, the default instructions for Santa will be to leave them on your front porch, so please be sure to wake up early to beat the porch pirates from ruining this Christmas season.

Santa Claus must travel 218 million miles on Christmas Eve, so Mrs. Claus is also asking that you don’t text or call him while he is out delivering everybody’s gifts. The last thing we need is a distracted Santa this season, because after all, it’s 2020.

Now on the bright side of things for many of you kids out there who have been naughty, because of recent climate change initiatives, lumps of coal have been harder to come by, and are being reserved for only the really naughty kids this year. But don’t push your luck.

Be safe, my friends.

Keven Moore works in risk management services. He has a bachelor’s degree from the University of Kentucky, a master’s from Eastern Kentucky University, and 25-plus years of experience in the safety and insurance profession.