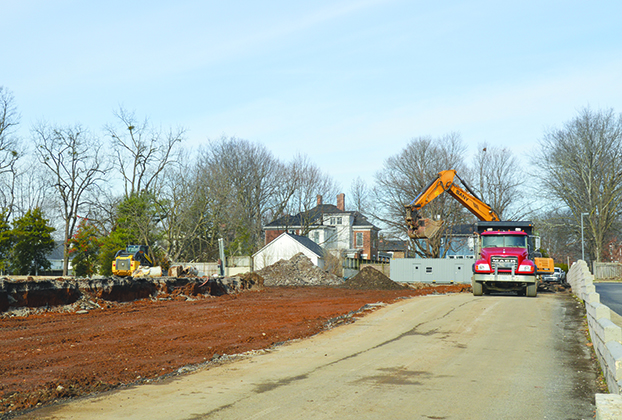 Construction is underway at the vacant lot next to City Hall on Main Street, where the new Central Fire Station will be. Construction is expected to be complete in 18 months. - Photo by Olivia Mohr

The new Danville Central Fire Station, which will be located in the vacant lot immediately west of city hall, is currently under construction after a bid award was granted to the contractor Marrillia Design and Construction in November. Danville City Manager Early Coffey said right now, the contractor is doing initial clearing and site preparation so the work can be properly laid out and organized, and administrative tasks behind the scenes are underway also, like ordering materials and organizing schedules.

Fire Chief Doug Simpson said the department is excited for the new fire station, as according to an email from Coffey the current one on Main Street is “undersized and outlived its useful life,” and “the consultant recommended demolition” of it.

“It will service the needs of the community for the next 50 years or more,” Simpson said in an email about the new fire station. “It will allow the Danville Fire Department to grow with the city’s needs and provide the citizens with the best service possible. We want our new fire station to be a community partner offering many services.”

The services Simpson referred to include CPR training, car seat installations and station and fire prevention tours for families and schools.

“The Station will be on the forefront with technology and safety features for our staff,” Simpson said in his email. “One of the most dangerous things we do currently at our location now is back into our bay areas with our fire apparatus on Main Street. Our staff has had many close calls over the years.”

Coffey said the new station is a general fund capital project with funding coming from long-term financing, and the project costs are approximately $6 million. The project is expected to be completed in about 18 months, he said.

He said some features the station will have are “modern operational amenities,” office space, training room and field training equipment and facilities.

Simpson said the new station at the new location will provide a level of safety he sees as deserved for fire staff.

“We are looking forward to the move and want to thank all the city commission, mayor and citizens for the continued support,” Simpson said in his email.