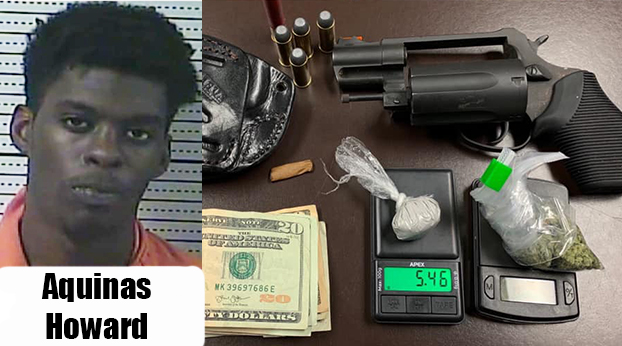 Chase ends in arrest, drug and other charges; one subject still at large

Capt. Casey McCoy of the Boyle County Sheriff’s Office conducted a traffic stop Monday afternoon that turned into a chase situation.
McCoy attempted to contact the driver of a vehicle when the subject took off, making a right turn on West Walnut Street.
McCoy pursued the vehicle to the end of Fairview Street, where both occupants of the vehicle fled on foot. One of the subjects was pursued to Aldridge Lane and taken into custody. He was found with a  loaded handgun, as well as heroin, marijuana, cash, and other paraphernalia.
Aquanis Howard of Macon, Georgia, was taken to the Boyle County Detention Center where he was charged with fleeing/evading poice (motor vehicle, 1st degree); fleeing/evading police on foot (1st degree); possession of a handgun by a convicted felon; trafficking heroin/marijuana, and possession of drug paraphernalia.
The investigation is ongoing and the other occupant of the vehicle has not been apprehended. Anyone with information is asked to contact the Boyle County Sheriff’s Office at 859-238-1123.
The Danville Police Department assisted during the investigation.
You Might Like

This document serves as a quick overview of calls the Danville police responded to Dec. 18-20. It does not include... read more