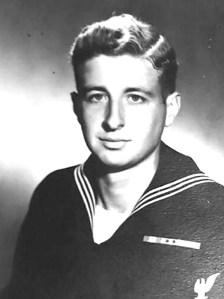 Robert Clarke Tamme, 88, died Wednesday, December 17th at his home on his beloved farm. He was born in Danville on June 20th, 1932, to the late Jesse Sr. and Nell Pritchett Tamme. Bob was a graduate of Parksville High School where he was a stand out basketball player. He was a player on the Southern Belle Softball team that won a state title and played for the world title in Toledo, Ohio. He was an avid sports enthusiast. He voluntarily joined the Navy and served four years in the Korean War. He scored in the top 20 out of thousands of boot camp enrollees on his math and clerical skills. Because of this he was sent to a communication school in Bainbridge, Maryland to become a signalman and quartermaster on ships in Korea. He was taught Morse code by flag and light. One of the islands he worked supplying was above the 38th parallel. He was one of the few sailors that was promoted to 1st class petty officer in less than four years. He was a lifelong farmer and owner of Bob Tamme Farms. He enjoyed spending time at the stockyards buying cattle for family and friends. He was Chairman of the Board for the Boyle County Agricultural Stabilization and Conservation Service for 18 years. He was a past President of the Cattleman’s Association and a member for many years. He was on the Advisory Board of the Bank of Danville and Trust Company and a lifelong member of SS Peter and Paul Catholic Church. He loved the beautiful front yard of the home on the farm, where many activities took place. From bank picnics, conservation office yearly meetings, as well as wedding receptions for all three daughters and countless parties for his kids and their classmates. Many Boyle County High School kids worked on the farm during summers to make extra money. It was a place of love and an ideal setting to raise his family. Bob was preceded in death by his loving wife of 60 years, Elsie Moore Tamme and great grandson, Jetson Fox Spears. Surviving are two sons, Bobby L. Tamme (Barbara) and Billy Tamme (Dena), both of Danville; three daughters, Mary Nell Southerland (Douglas) of Danville, Barbara Anderson (Phillip) of Danville and Julie Coffman (Archie, III) of Junction City; siblings, Ray Tamme (Judy) of Illinois, Anne Tamme Williams (Joe) of Hawaii and Bernie Tamme (Sue) of Louisville; grandchildren, Hunter Anderson, Kristin Anderson and Cassie Anderson (Justin) and great grandchildren, Eli Anderson, Jeb Spears, Colton Chester and Chloe Chester and several nieces and nephews. He is also preceded in death by a brother and sister in law, Jesse, Jr. and Ina Jane Tamme. Special thanks to his four caregivers who took care of him as if he was their own Dad. Thank you Daphne, Tina, Angie and Carrie. Thank you to the best home health nurse, Dana. Private services will be held by Fr. Dick Sullivan and Fr. Anthony McLaughlin on Tuesday, December 22, 2020 at Preston Pruitt Spurlin Funeral Home. Burial will follow at Bellevue Cemetery. Pallbearers will be Hunter Anderson, Eli Anderson, Colton Chester, Justin Chester, Jeb Spears, Chloe Chester, Joe Tamme and Theo Tamme. Honorary pallbearers will be Betty Jackson and family, Darrell and Phyllis Taylor and family, Jimmy Overstreet, David Huffman, Gene Worthington, Colette Worthington Coomer, Sonny Hunt, Larry Barber, Gene Barber, Dr. Nash, Dr. Cleveland, Dr. Moran, Dr. Overstreet and Danny Milburn. In lieu of flowers, memorial contributions are preferred to Boyle County High School FFA in memory of Mr. Tamme.