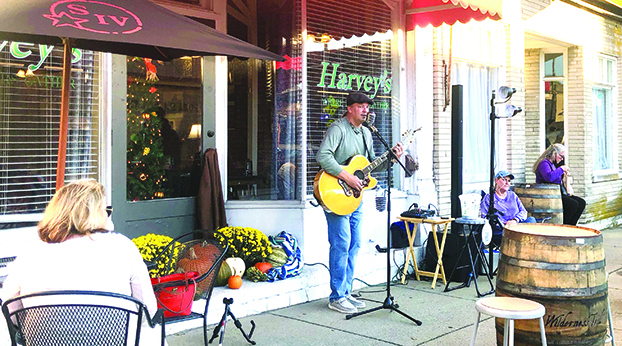 Between the first and second shutdowns of indoor dining, this photo was taken of outdoor seating. The barrels pictured were donated by Wilderness Trail Distillery, and the music and outdoor seating was offered partially to give customers who had gotten “stir-crazy” during the pandemic something to do, said AnnYager McCrosky. - Photo submitted

Owners, staff reflect on a week of being open after second shutdown

When Gov. Andy Beshear passed an executive order prohibiting indoor seating Nov. 20 through Dec. 13, local restaurants prepared for a second shutdown after the first had already given them a hit to their business. Unlike during the longer first shutdown, restaurants didn’t have a second round of Paycheck Protection Program loans. They did, however, have the opportunity to apply for $10,000 per restaurant through the Team Kentucky Food and Beverage Relief fund, which came out of $40 million from federal coronavirus relief funds. Restaurants have had to roll with the punches, closing indoor dining and reopening according to the severity of the spread of COVID-19 and state regulations. The Advocate-Messenger talked to people from local restaurants about how they’ve transitioned.

Harvey’s
Alex McCrosky, who owns Harvey’s with his wife, AnnYager McCrosky, said business is down about 40% compared to last year. Harvey’s weathered the first shutdown relatively well, he said, thanks to the loyalty of customers who ordered takeout and with “a lot of help” from PPP loans.

“The only reason we’re still here is because of our customers,” he said.

During the second shutdown, however, Harvey’s completely closed, even its takeout, for about two weeks. Since there wasn’t PPP for the second round, McCrosky said the restaurant wasn’t making ends meet. Also, some of the staff contracted COVID-19, and the business made the decision to temporarily close its doors so staff could get tested and quarantine. It was fairly easy to shut down then, he said, since all that was being offered was takeout at that point.

Harvey’s reopened Dec. 15, strictly adhering to the 50% capacity rule and wearing masks on the restaurant floor. Business has been sporadic in the reopening of indoor seating. People can only do so much, McCrosky said, and the capacity guideline has made things difficult.

Between the first and second shutdowns of indoor dining, this photo was taken of outdoor seating. The barrels pictured were donated by Wilderness Trail Distillery, and the music and outdoor seating was offered partially to give customers who had gotten Òstir-crazyÓ during the pandemic something to do, said AnnYager McCrosky. – Photo submitted

McCrosky said Harvey’s applied for relief funds during the second shutdown and received the $10,000.

“Any help is greatly appreciated, but at the end of the day, $10,000 for a restaurant of this size or really any restaurant downtown is just a drop in the bucket,” he said. “The state is doing all that they can, and I understand that. I hope there’s a second round of Paycheck Protection coming.”

The $900 billion second coronavirus relief bill as it currently stands, which passed through Congress Monday, Dec. 21, was criticized by President Donald Trump because of its offer of $600 stimulus checks. Trump called on Congress to increase them to $2,000 checks, according to the Washington Post. The bill also includes approximately $284 billion for PPP for small businesses across the country, according to Forbes.

PPP loans are the only reason Harvey’s got through the first shutdown, McCrosky said. He said he thinks there will be another shutdown come the new year “unless the vaccine goes very, very smoothly,” and he said if there is, “there’s going to have to be some kind of forgivable loan for small businesses.”

McCrosky said he has appreciated not only customers but also staff during this time, since they know the business needs them to function. It’s hard to look at them and ask them to shoulder the business’s burden, he said.

“At the end of the day, they’re real people that work for us, and they have real lives and real problems and real bills,” he said.

Giovanni’s
Marissa Cummins is a waitress at Giovanni’s, which is a chain with locally owned individual restaurants. She sees another side of business as a staff member. She said staff hasn’t had an issue being provided with personal protective equipment needed, and she said the buffet is set up so customers can get their pizza with spatulas, which are kept on a clean plate so they can be reused, and everything else is self-served.

“Other than that, we’ve been doing everything we can to help prevent the spread but still remain open,” she said. “It’s been a struggle, but we’re still hanging in so we can remain open. We’re glad to be open, and we want everyone to come out here and see us and enjoy some food and drink.”

After the second shutdown, Cummins said she thought the restaurant would be busy when it reopened, but dine-in service has been slow. She said she thinks it might be because people are still scared.

Around Christmastime, though, customers have been tipping well, and she said even though she doesn’t work with delivery and carryout herself, she knows those aspects of business have been fairly steady since March, when shutdowns first began.

Melton’s Deli – Main Street
Gina Melton, co-owner of Melton’s Deli on Main Street, said business has been down about 30-40% compared to last year because it relies largely on indoor dining. She said during the shutdowns, she and the others who work there — it’s largely family-run, she said — showed up to work each day, and customers showed up for carryout. The restaurant followed guidelines and executive orders as they were released, she said.

“Our customers have been very supportive, and we’ve been blessed to have a local community that appreciates the small business people,” she said.

One aspect of business that’s taken a large hit is catering. Normally, Melton’s Deli would cater a few times a week for offices and other settings, but now that people are discouraged from congregating in large groups, that’s been eliminated.

She said most of her family who works at Melton’s Deli are of retirement age, but she sympathizes for restaurant workers who have young children at home or other circumstances. She feels for larger restaurants who have a staff of 30 to 40 people with that job as their main source of income. To have to tell workers their jobs were in peril would be horrible, she said.

“It’s hard for me to be anything but grateful for my situation through this, even though it has been a financial strain,” Melton said.