Calipari is still having fun, eyes turnaround against rival Cardinals 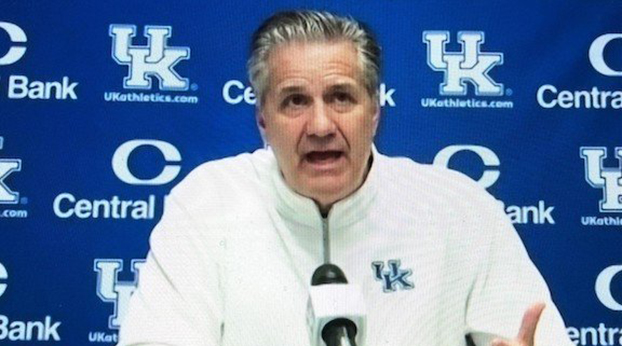 John Calipari insists he’s still having fun as he navigates through a rare five-game losing streak to open the season.

“I want to have fun doing this,” he said. “That’s the secret sauce in what we do. Yeah, I’m aggressive and I hold them accountable at a high standard, but I’m having a ball and I think they can feel that. And right now, there’s been a frustration level because of things that normally are non-negotiable in this program.”

The Wildcats (1-5) will attempt to end the skid at Louisville Saturday and Calipari is optimistic his team can turn the corner against the Cardinals. Kentucky has won the past three games in the series, including an exciting 78-70 overtime victory a year ago at Rupp Arena. Louisville is off to a 5-1 start and coming off a 64-54 win over Pittsburgh earlier this week. The Cardinals’ lone loss was an 85-48 setback at Wisconsin last Saturday.

Calipari admits the process “isn’t easy” and “people are seeing blood in the water and you’re at Kentucky.” He added that it’s his team’s chance to make a statement for the rest of the season, starting with the Cardinals.

“We’re not going to face a team that doesn’t play hard or plays poorly,” Calipari said. “They’re not going to. I don’t expect that Saturday. I expect Louisville to play well. I expect it. What I’m hoping is we play better. And if we’re playing better and we see it and we compete, we’ll live with the results. I’m feeling like, again, there are things I’ve got to do to help these guys get over the hump, and I’m doing everything I can right now.”

Part of Kentucky’s struggles, Calipari said, has been the lack of team building, which has been more difficult because of the ongoing pandemic. Calipari took steps to ensure more team-oriented activities this week and is hopeful it will prove to be beneficial in the future. He also took responsibility for his team’s struggles down the stretch this year.

“They’ve got to do something together with one another and we’ve got to do it in unison,” the Kentucky coach said. “The other part of bringing them together, that piece of it, when you’re only on the court two or three hours a day with somebody and the rest of the time you’re not creating relationships, this is extremely hard with new teams. So, I’m trying to do that. I’m trying to do a better job of getting them to understand how to finish games. Four minutes to go, we looked panicked. Well, that’s on me.”

The team’s frustrations have reached beyond the court and Calipari has appointed three players — all of which figure to be upperclassmen — to deal with items within the program that are non-negotiable expectations.

“I’m not dealing with any of that now,” Calipari said. “The players are going to deal with it. So that’s off my plate. Trying to get them to be more in control of how we’re playing offensively and less of it me.”

Veteran guard Davion Mintz said the team has bought into the concept.

“Everyone is on board with it,” he said. “Everyone is agreeing with it and jumping on board. That’s what it is.”

Earlier this week, Calipari suspended freshman Cam’Ron Fletcher for his meltdown following a 75-63 loss to North Carolina in the CBS Sports Classic. Since then, Calipari has spoken to Fletcher and expects the freshman forward to return to the program, but hasn’t set a timetable for that to happen.

“I think he’ll be better for this,” Calipari said. “Now we understand there are certain non-negotiables here. You just can’t be this way. You can’t act this way. This is hard. There’s emotion in this. Players play, coaches coach.”

Calipari said the Cardinals will present a challenge but also have performed better than his squad this season.

“They’ve played better than we have — no question about it,” Calipari said. “They’ve been more specific in how they’re playing, mostly through (Carlick) Jones and putting him in pick-and-rolls and doing stuff with him. But everybody on that team has accepted their role. We’re still trying to figure out who is who right now.”