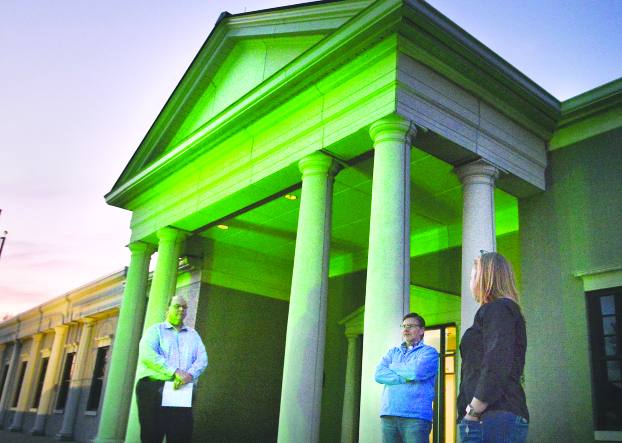 In this file photo, City Hall gleams green to bring awareness and show a sense of community during the COVID-19 pandemic. - File photo

Danville’s previous city manager, David Milliron, came up with the idea for the city to sell green light bulbs, which were sold in April and May, during COVID-19 and give the money to local charities and other organizations. Now months later, the green lights still grace local government buildings and residential porches.

“It seemed a bit out of our normal business but turned out to be popular,” said Danville Mayor Mike Perros in an email. 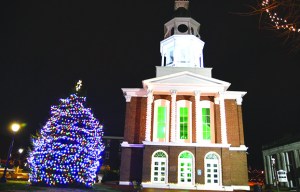 In this file photo, the inside of the Boyle County courthouse shines with green light next to a Christmas tree lit during a tree lighting that was livestreamed on the Heart of Danville and City of Danville Facebook pages to avoid the congregation of a crowd. – File photo

Perros said in total, over 4,000 bulbs were sold or distributed to other communities across the state, and Danville gave 500 to Perryville and Junction City for their citizens. It became surprising when people caught on to the bulbs, Perros said — people began calling or coming into city hall to get bulbs.

It was decided early on that proceeds would go to charities, Perros said, and city commissioners chose a charity or charities that would benefit. Perros and each of the commissioners had about $2,130 to give, adding up to $10,650. James “J.H.” Atkins chose Backpack Kids, Denise Terry chose to split money between the Boyle County Schools and Danville Independent Schools lunch programs, Rick Serres chose to split between CASA of the Bluegrass and Nursing Home Ombudsman, Kevin Caudill chose Shepherd’s House, and Perros chose Family Services Association of Boyle County.

“In addition to the green bulbs, each night that a death in Kentucky was reported, commissioners took turns reading something to create more awareness. This often times involved ‘guests’ that we thought could add to the message. This went on for several months,” Perros said in his email.

In an Advocate-Messenger story from April 7, Perros said green is the color of compassion, and it was important to light city hall green, which it still does now every night, as a reminder the city is aware of the pandemic. Gov. Andy Beshear encouraged communities to show solidarity with green lights back in March.

“As the government body of the city, we were simply trying to raise awareness and add to the sense of community,” Perros said in his email.