Harmon tests positive for COVID one day after receiving vaccine 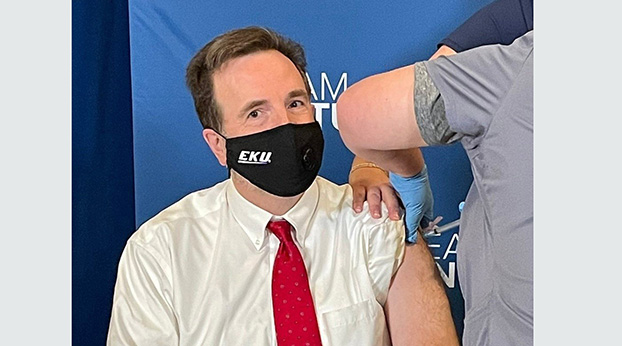 One of Kentucky’s Constitutional officers is in self-isolation after he and his wife both tested positive for COVID-19.

State Auditor Mike Harmon, who was one of four state officials who received the Moderna vaccine on Monday, issued a statement Wednesday morning in which he said:

“On Tuesday morning, my wife went to be tested after receiving notification that she may have been exposed to COVID-19.

“My wife and I only have mild symptoms thus far, and are taking all necessary steps to self-isolate and follow the recommendations of public health officials and the CDC.

“While the timing of my positive test comes one day after receiving the COVID-19 vaccine, I still have full faith in the vaccine itself, and the need for as many people to receive it as quickly as possible. It appears that I may have been unknowingly exposed to the virus and infected either shortly before or after receiving the first dose of the vaccine on Monday. My family’s example underscores the need that we continue to advocate for our front-line health workers, first responders, teachers and high-risk individuals to be vaccinated.

“I am thankful for expressions of concerns and prayers for my family during this time.”

Other state leaders who received it on Wednesday included Gov. Andy Beshear’s chief of staff, La Tasha Buckner, senior advisor Rocky Adkins, and Virginia Moore, executive director of the Kentucky Commission on the Deaf and Hard of Hearing, and one of those people who provide translations into American Sign Language at the Governor’s press conferences.