Sore arms are the most reported COVID vaccination complaints 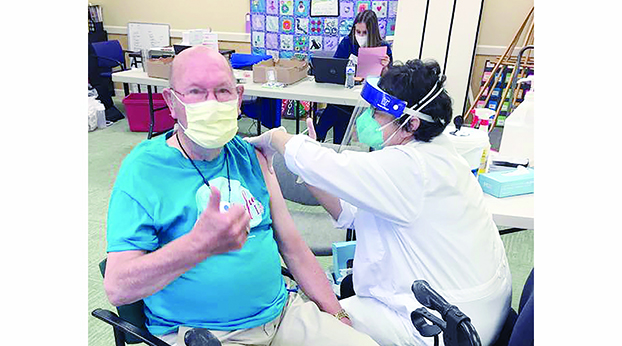 On Sunday afternoon, 87-year-old Sherman McMichael received his first round of the COVID-19 vaccination at his home at McDowell Place of Danville.

“I was glad to get it. I was really looking forward to it,” McMichael said on Monday.

McMichael said he received the vaccine about 12:30 p.m. Sunday. And by Monday he hadn’t experienced any of the symptoms that residents were warned about being common side effects. “I’ve had no problems at all. My arm’s not a bit sore. I feel like it always did — no fever, no chills and no side effects that we were warned that could possibly happen.”

With the vaccines now available, “We’re more confident,” that they will be able to move about in the community more freely.

McMichael said residents at the assisted living facility have been confined to McDowell Place since March 18, except for the occasional doctor’s office visit or other essential outings. “If we do go out (for an extended time), we’re quarantined for 14 days,” in our room, he said. “That’s been kind of hard.”

Residents are allowed to take walks in the hallways and go outside, he said. They can also visit with up to two family members at a time in an outdoor seating area.

But the vaccines are giving residents hope of returning to some type of normalcy. “It was the best thing that could happen for us.”

Boyle County Emergency Management Agency Director Mike Wilder received the vaccine about two weeks ago and said the only reaction he had was a sore arm for a couple of days, which is the most common complaint he’s heard from others who have received the vaccination, he said.

Boyle County Health Department Director Brent Blevins said the most common side affects he’s heard about have also been sore arms, “kind of like when you get a flu shot.”

He said another person reported their arm was a bit more swollen at the injection site than when they had a flu shot. And someone reported that they had a slight fever for a short time.

Blevins said the health department should be finishing up vaccinating health care workers and staff at Northpoint Training Center this week.

He added that he didn’t know when the vaccines would be released to local physicians’ offices and pharmacies to distribute to the general population.

“I hope they will get them soon. That’s where most people get their shots.”