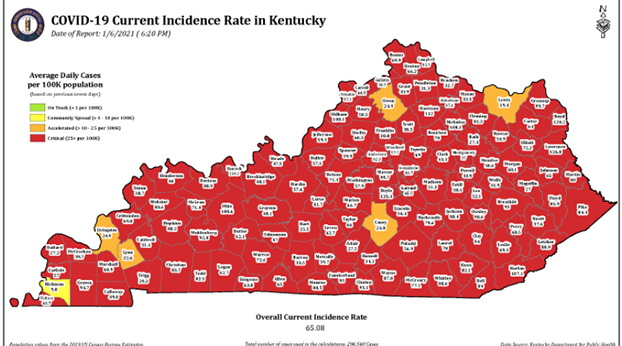 Gov. Andy Beshear announced a high number of COVID-19 related deaths, along with a daily record number of new cases on Wednesday.

A total of 5,732 new cases were reported to state public health officials, meaning there have now been 286,541 positive cases since the first one was reported on March 6.

The state’s positivity rate has now risen to the highest it has been since May 5, and currently stands at 11.7%.

There are 1,778 Kentuckians in the hospital.  Of them, 428 are currently in the Intensive Care Unit, with 244 on a ventilator.

There were also 34 more deaths reported on Wednesday, bringing the pandemic total to 2,806.  The latest victims ranged in age from 40 to 97.  Jefferson and Pike counties each had five; Carter had four; Calloway, Hopkins, Monroe, and Pulaski counties had two apiece; while Bell, Casey, Clay, Grayson, Hardin, Hickman, Kenton, Nelson, Ohio, Russell, Washington, and Wayne counties each reported one.

“Today’s numbers show how critically important a centralized effort and response is to defeating this virus,” Beshear said.

That was a reference to legislation being considered by the General Assembly to exercise more control over a governor’s powers to issue executive orders during an emergency.

To view the full daily COVID-19 report for Kentucky, which includes such information as the red zone counties and red zone recommendations, testing locations, the weekly White House Coronavirus Task Force reports for Kentucky, details on school reopening, executive orders, vaccine distribution, and other information on the state’s pandemic response, go to kycovid19.ky.gov.

The governor’s next live press briefing was scheduled to be held Thursday afternoon at 4, but since his delivering of the Budget and State of the Commonwealth address has been postponed until Thursday night at 7, due to the rioting at the U. S. Capitol in Washington, it is not known at this time if the briefing will take place.