Danville physician was active in the community, treated Civil War soldiers in Perryville 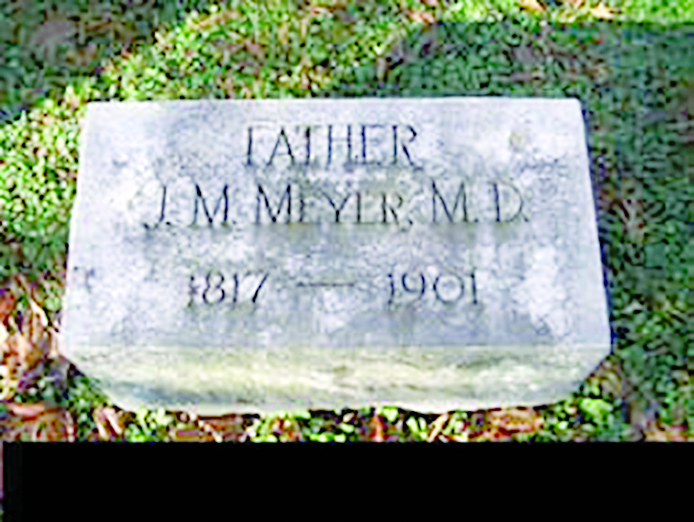 A Danville physician was active in the community for more than 50 years in the late 1800s.

Dr. John M. Meyer came to central Kentucky from South Carolina in 1835 to attend Centre College. He graduated with a bachelor of arts degree in 1840, and studied medicine in Lexington with Professor B.W. Dudley, a medical doctor. He finished his degree in the Transylvania Medical Department.

Dr. Meyer served as a physician until shortly before his death in 1901 at the age of 84.

He and Mary Reed McDowell, daughter of one of the most distinguished families in early Kentucky, were married on Dec. 8, 1844. She was a daughter of Captain Samuel McDowell and Maria Ball. The couple settled on a 224-acre farm near Salt River in the Atoka community.

Dr. Meyer also was active in community affairs. He was a member of the Central Kentucky Medical Association and frequently gave papers on various subjects pertaining to medicine and diseases.

He was a stockholder in the Central Kentucky Fair Association, and often exhibited his prize Jersey cattle and other livestock at the local and state fairs and county fairs in other states.

Dr. Meyer was also involved in the Commercial Club, and served on the Danville Board of Trustees and the Teachers Institute in the county.

Meyer and his family attended First Presbyterian Church where he served as elder.

Dr. Meyer served in the Confederate Army during the Civil War with John Hunt Morgan’s Regiment. He also helped treat the wounded after the Battle of Perryville in 1862.

His granddaughter Mary McDowell Lune, a teacher in the School for the Deaf in Colorado Springs, said one of her students and a former Confederate soldier, told her he was treated by Dr. Meyer after the Battle of Perryville.

A short autobiography Dr. Meyer wrote about his thoughts on retiring is as follows was published in The Advocate:

“When I reached my 70th anniversary I thought I would quit practice, but found with a sound body and cohesive intellect I ought not to be idle; I concluded to wear out and not rust out.

“The result has been, that the last 10 years have been profitable to patient and doctor of any 10 years in my history.” 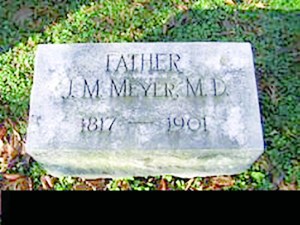 His obituary in The Advocate stated: “Meyer has lived a long and useful life as a physician and possessed in an eminent degree of cardinal virtues. He had faith, he had hope, he lived by it, and he had charity, which showed buy liberal gifts to the exalted charities for schools, colleges, churches and the more lowly and common place, but more useful charity that of relieving the physical distress and necessities of the individual poor.”

When Dr. Meyer died, he was survived by five children: Dr. Joseph Meyer of Paris, Texas; Florence Meyer, a matron of the state Institution for the Deaf in Taladega, Alabama; Mary Lyne of Lexington; Oscar Meyer of St. Louis, Missouri; and James Thornwell of Boyle County.

The doctor died Sept. 5, 1901 in Danville at the home of his son Thornwell Meyer near Perryville. 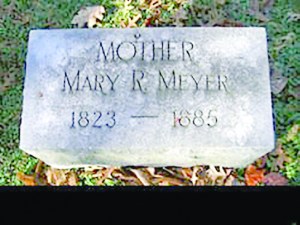 His wife Mary died in 1876. Both are buried in Bellevue Cemetery.