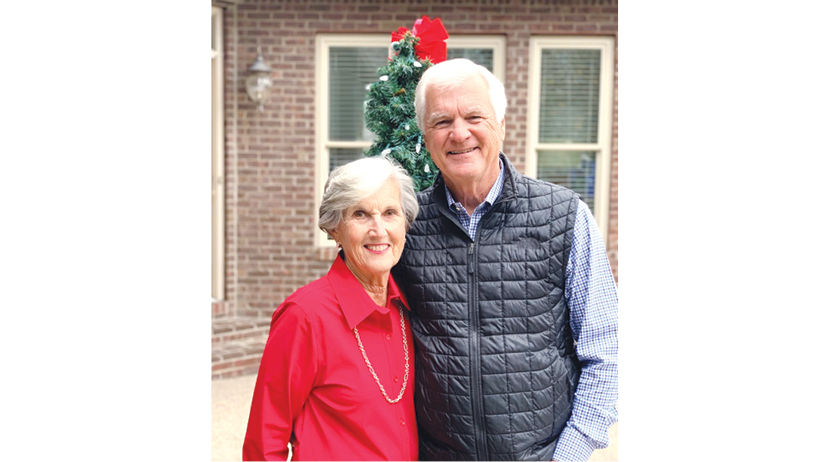 Keelan Pulliam credits FFA as the thing that allowed him to see beyond the end of his family farm’s driveway, and he and his wife Diana have spent their recent years making sure current Kentucky FFA members have the same opportunity.

Most recently, the Pulliams have given $50,000 to the Kentucky FFA Foundation’s Forever Blue Fund. The Pulliam’s gift will support student opportunities in the Growing Leaders category, and will be directed specifically toward FFA members from Franklin County and Western Hills High Schools.

Rolled out earlier this year, the Forever Blue program is fairly unique in that donors can designate exactly which chapters their gifts should benefit, and in what area – either Growing Leaders, Strengthening Agriculture, or Building Communities. The donation is invested with the FFA Foundation’s larger endowment, which offers management and investment advantages, and the dividends from that gift go back to the designated FFA chapter or chapters.

The Pulliam’s donation will fund scholarships for FFA members at Franklin County and Western Hills High Schools to attend FFA camp and the Washington Leadership Conference. These are precisely the types of opportunities that were such a powerful part of Keelan’s FFA experience.

“I can remember my first trip to Coldstream (UK’s research farm),” said Keelan. “I’d never seen a farm like that – I’d never even seen a barn that big. There are still a lot of kids out there who don’t have opportunities to do those things.”

Keelan capitalized on his FFA experiences, dedicating the next several decades after high school to expanding his horizons as a leader in the world of agribusiness. He never forgot his roots though, and after a successful career, he and Diana returned to Kentucky and settled in Danville, not too far from his childhood home in Franklin County.

It didn’t take long for the Pulliams, who seem to embrace a philosophy of giving in every way they can, to take an active role with the local FFA chapter at Boyle County High School. Toni Myers was the first teacher they worked with. She credits Keelan with using his agribusiness acumen and contacts to help Boyle County’s program. Even more valuable she says, is the time he has spent volunteering with her students and serving as one of her mentors.

“I called him one day,” said Myers, “and I could just tell he loved FFA. He came around often. He wasn’t just that person who was helping you with a phone call. He would come see what you were doing. They could have just written a check and called it good,” she said, “but he knew our kids by name.”

“I learned a lot from him. He came in and helped with FFA officer interviews, speech contests – if Mr. Pulliam was coming, the kids knew they’d better have their stuff together. There’s a little more weight when someone like that is invested in your program.”

Diana also got involved. She had worked as a teacher, and with her background growing up on a dairy farm in Bullitt County, she was a natural fit to serve as a substitute when any of the Boyle County agriculture teachers had to be out of class. She’s taking a break this year because of the COVID-19 pandemic, but is looking forward to reconnecting with the program as soon as possible.

“Diana is a giver too,” said Myers, who now teaches in Fayette County. “We loved having her sub in our classes. She is just such a great influence on students.”

Keelan has worked in a similar way with his home FFA chapter in Franklin County. On a statewide level, he has served on the FFA Foundation Board of Directors since 2014, and has been the chairman of the board since 2019.

“We have thrived under his leadership,” said Sheldon McKinney, the executive director of the Kentucky FFA Foundation. “He and Diana have both been all-around supporters of FFA. They have given of their time, their talent, and their treasure, and have propelled us forward in a big way.”

“You never outgrow FFA,” said Keelan. “I learned how to develop my speaking skills, build my interpersonal relationships, business acumen…then I started learning about business through the SAE projects. That foundation – you carry that your entire life.

“I’m the one who usually looks on the bright side of a situation,” he said. “We’ve got kids who haven’t been in school for almost a year now…but the one thing I’ve observed is that ag teachers and FFA activities have gone on.”

“It’s so important in their social development,” said Diana. “Kids have lost graduation, prom, their senior year, but they didn’t lose FFA. I’m not worried about FFA kids. They’re going to be equipped for the future and better for all this.”

Why did the Pulliams choose to contribute to the Forever Blue Fund when they both have already given so much to Kentucky FFA?

“We have FFA in our estate plans, but there was a sense of why wait, if you can impact some lives now?” said Keelan. “FFA was a game changer for me. I had a natural competitive spirit. I had a desire to be the one in the group who led the conversation. FFA for me was a means to develop those natural tendencies. It got those competitive juices flowing.”

True to his character of leading the cheering section for Kentucky FFA, Keelan was sure to point out the way the Kentucky FFA Foundation, agriculture teachers, and agricultural education leaders have continued to support students through the challenging year.

“We backed up, regrouped, and said, ‘How do we give kids opportunities through this? We’ve got a great story to tell. To me, FFA should be at the top of anyone’s list.”