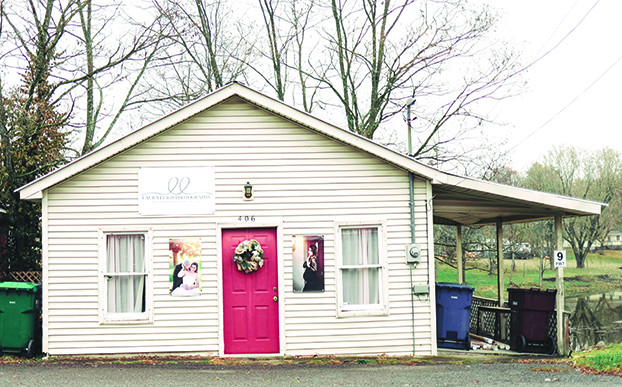 Laura Goode’s business, Laura Leigh Photography, is pictured at its current location at 406 S. Buell St. in Perryville. It is one of two Merchant’s Row historical properties the city wants to sale. Goode is against the sale and began a petition in an effort to stop it. - Photo submitted by Laura Goode

Perryville intends to sell the two remaining historical buildings it owns on Merchant’s Row, as well as a vacant lot, through public auction at a date that has not yet been determined. This was unanimously decided at a city council meeting on Jan. 7. The buildings to be sold are a carriage house and warehouse that now house The Bargain Barn and Laura Leigh Photography.

Under the city’s ownership, Main Street Perryville has rented out and maintained the properties. Now that the business owners know the buildings will be sold, neither of them plan to keep their businesses in Perryville. They received instruction from the landlord to leave the properties, first by Feb. 11, and then the city gave them more time, until the start of March, said Laura Goode, who operates Laura Leigh Photography.

Goode plans to move her business, which has been in Perryville at 406 S. Buell St., for about three years, to Danville or Harrodsburg. Even with more time, which she said gives the businesses a larger window of time to find new locations and pack up, she said at the end of the day, “we are still packing up and being forced out of town by the city’s actions.”

Goode said the timing of the city’s decision to sale is especially strange to her because it is during an ongoing pandemic. She said she is nervous to find a different property because the rent is very affordable where she currently is since the property is owned by the city and rented out by Main Street Perryville, which is a nonprofit organization. Where she currently lives in Harrodsburg, she’d have to have her house rezoned as both residential and commercial to operate her business out of her home, and she said though she can do some photo shoots without her own space, like weddings and outdoor photo shoots, she shoots a lot of pictures of newborns and children under 1, and in cold weather, outdoor shoots are not feasible for infants. She definitely needs a space, she said.

Also, most of her clients are from out of town from areas like Lexington and Louisville, and she sees about three to four clients a day several times a week.

“They didn’t even know that Perryville was a dot on the map, so my business alone has brought so many tourists to the area that are spending money here, when they leave at the cafe getting something to eat, some of them who are coming out of the state,” she said.

If she had to move to a place with more expensive rent, she said she’d most likely have to raise her costs, which could inconvenience clients during a time when they might not be able to afford higher prices. This could potentially shut her down, she said.

The owner of The Bargain Barn, which is currently housed in the other Merchant’s Row property to be sold, is Stephanie Gilbin. She said her business opened there quite recently — it moved in on June 1.

“When you get something like this, you plan on being there for a while, and I’ve gotten my clientele built up good with consignors now,” she said.

Like Goode, Gilbin plans on leaving Perryville since she said there is limited availability of properties there.

Goode said she is “highly against” the sale of the remaining Merchant’s Row properties, especially considering Perryville has few small businesses as it is. She started a petition against the sale on Change.org, which as of 2:30 p.m. on Jan. 14 had gotten 199 signatures, including former city councilman Chad Blackwell’s.

Blackwell said in an email that not only the businesses would be affected but also Main Street Perryville, which would lose income since it would no longer be renting out the two properties. He said he also fears that a sale could mean the buildings could get into the hands of an owner that would neglect the buildings or not follow the easements meant to protect them since they are historical properties.

City attorney Justin Johnson said in an email that the city originally took ownership of the properties by deed dated Oct. 15, 2001. It simultaneously created a lease with the Perryville Battlefield Preservation Association, which he said later became Main Street Perryville.

Johnson said the auctioneer the city contracted with to sell the two properties the city is selling through public auction is Willie Baker.

“I am currently still communicating with several individuals to determine the validity of this claim” he said. “As for the historical easements placed on the property, they will remain on the properties regardless of who owns them and the new owner(s) will be subject to such easements.