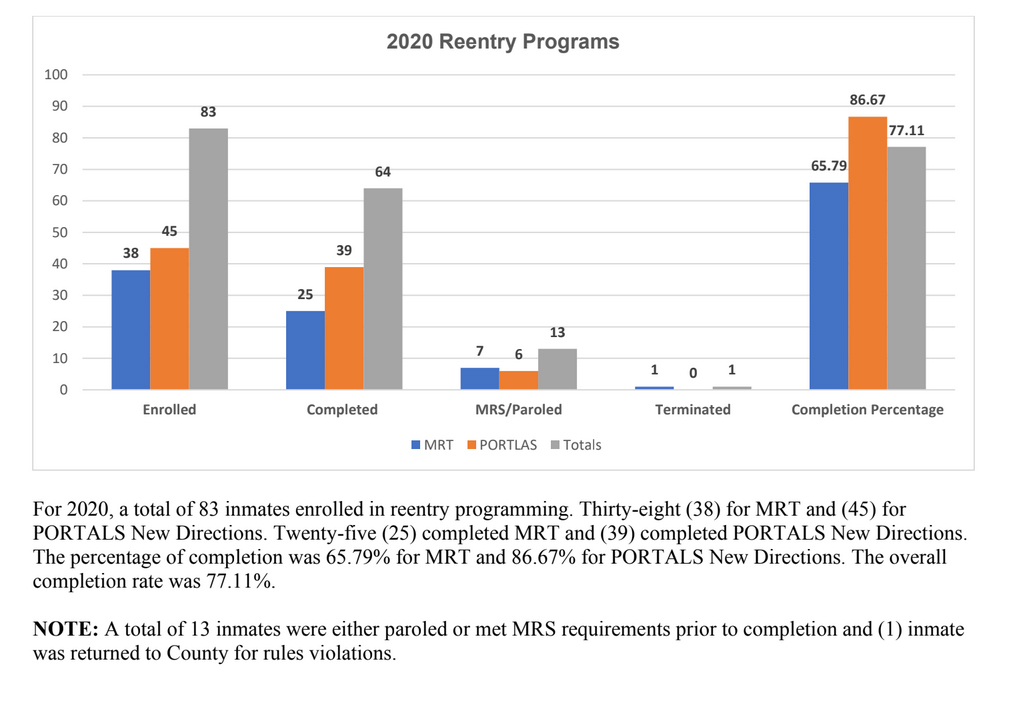 The first year of Boyle County Detention Center’s 2020 re-entry programs for state inmates had a total of 83 inmates enrolled with an overall completion rate of 77.11%, according to Re-entry and Jail Programs Director James Hunn Jr.

In a letter sent to Jailer Brian Wofford, Hunn wrote, “I have been overwhelmed with gratitude in seeing our inmates complete the curriculum” for both of the jail’s re-entry programs. “I believe each inmate who completed the programs were given tools to successfully reintegrate into their communities.” 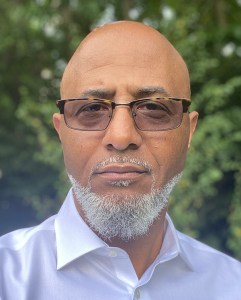 The programs’ mission is to “reintegrate former inmates into the community, public safety, lower jail cost and reduce jail recidivism through addressing the educational, employment, healthcare, housing, and family relationship needs of inmates re-entering society by providing support and connection to needed services in the community after release,” according to Hunn’s report.

The two programs used at the jail are Moral Reconation Therapy (MRT) and PORTAL New Direction which is a combination of Parolee Orientation Re-entry Training Assimilation Lesson (PORTAL) and New Direction, which is a “promising practice that took the place of Kentucky’s Prison to the Streets program.”

According to the report, 38 inmates signed up for the MRT program and 25 completed the course, for a completion rate of 65.79%.

There were 45 inmates who participated in the PORTALS New Direction program where 35 completed the course for an 86.67% completion rate.

A total of 13 inmates were either paroled or met MRS requirements prior to completion. One inmate was terminated from the MRT program when they were returned to the jail for rules violations, according to the report.

The MRT program “is a systematic treatment approach … increases moral reasoning. … It combines elements from a variety of psychological models to address clients’ ego, moral, social, and positive behavioral growth, and research has shown that this type of therapy can increase moral reasoning in adult drug and alcohol as well as juvenile offenders. In addiction recovery treatment, MRT takes the form of individual and group counseling, and uses prescribed homework assignments and structured group exercises to address seven basic treatment issues. This is a 12 step (6-9 months) long program and upon completion of the program 90 days is credited onto the inmate’s sentence.”

PORTAL New Direction, “Is a 16 Module, 19-hour long course that gives inmates the opportunity to learn valuable information to help have a successful reentry into society. If inmates leave the program prior to completion, they will be able to restart at their current module at their new facility/Parole office. This program helps promote good disciplinary behavior while incarcerated and give inmates incentive to become a productive citizen while earning (90) days credit upon completion.”

Another service that Hunn worked with inmates on was helping to get birth certificates for those who needed them for identification purposes once they are released from jail. In 2020, there were 23 inmates who needed this service and Hunn filed applications to the following states: Kentucky (16); California (1); Georgia (1); Illinois (1); Michigan (1); and Ohio (3).

Also, many inmates were in need of Social Security cards.

Hunn wrote, “Hard work was invested in obtaining birth certificates and social security cards (still awaiting instructions from the Social Security Office) for those inmates who need these vital documents. We know the lack of identification documents is a barrier to successful reentry if ex-offenders do not have them in their possession upon release.”

Currently, the local Social Security office is working to have the BCDC added to the Memorandum of Agreement with the Kentucky Department of Corrections as a facility that is authorized to request the cards for current inmates.

In addition to these programs, Hunn wrote that 15 books were purchased for the jail’s re-entry program “ranging from landscaping, diesel mechanics, veterinary, investing and farming” and recovery. The goal is to allow inmates to continue to educate themselves on possible career choices as they prepare to return home and find gainful employment,” Hunn wrote.

Wofford said, “I’m very pleased with the program. Our re-entry director James Hunn has done a tremendous job. He is the reason we have great results.”

Wofford said the re-entry program is currently offered just to state inmates who have completed the Substance Abuse Program (SAP). And all state inmates are men.

However, a new program for the county’s male and female inmates is scheduled to begin Feb. 15, as long as COVID-19 doesn’t interfer with the jail’s plans, he added. “I think we will be the second jail in the state that provides any treatment for women,” Wofford said.

“Our goal is to provide inmates the opportunity to be prepared for life outside the jail and reduce the chance of returning,” Wofford said. “We want the men and women leaving to be set up for success. I’m grateful I get to serve a community that wants to change its approach to how we do corrections.”