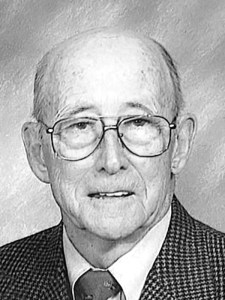 Thomas Benjamin “Bud” Bright, Sr., 92, died January 10, 2021. Bud was born in Hedgeville, Boyle County, KY on March 17, 1928 to the late John Rochester Bright and Alice Sands Montgomery Bright. He attended Hedgeville Elementary School and Danville East End Middle School. He graduated from Danville High School where he played for the football team. After high school he attended the University of Kentucky where he studied Agricultural Science.

Bud grew up on his family farm in Hedgeville, KY, which is where his love of farming began. Bud’s professional career started at 18 when he bought his first commercial truck to haul local freight while continuing to farm. Bud worked with his father at Farmers Tobacco Warehouse in Danville. During this time, he also sold tobacco crop insurance. He and his father bought Bendor Farm in 1948. Bud served as Sergeant First Class in the Kentucky Army National Guard from 1948-1951. He then married his high school sweetheart Doris June Cross Bright on September 22, 1951. Bud and Doris welcomed their first child Laura in 1954. In 1956, in order to better provide for his growing family, Bud started Bright’s Bottle Gas through a Gulf branded dealer program. Bud and Doris welcomed two more children, Tommy in 1957 and John in 1966. Bud’s family and their employees continued to grow the business until its sale in 2008. At which point, Bright’s Bottle Gas and its 15 employees had over 260 years combined experience, showing their loyalty to the family business and its customers. During his 52 years in the gas business, Bud had many achievements. He was a Kentucky Colonel; he was Mayor of Burgin, KY; he was on the board of the Kentucky Retail Federation where he received an exemplary service award; he served on the Board of Directors for the Kentucky Propane Gas Association (KPGA); he served as the President of the KPGA; he received the KPGA President’s Award several times; the KPGA Ruth Rilling Lifetime Achievement Award; an honorary lifetime membership to the KPGA; and served as the first chairman of the Kentucky Propane Education and Research Council (KYPERC). Also during his tenure in the gas industry, Bud started two other corporations, LTJ Transport, Inc. and Bright’s Propane Service, Inc., which provided related propane services to his customers. Bud retired from the gas business into fulltime farming at Bendor Farm, which was his true passion. Over the next decade, he tripled the size of the family farm, running an Angus Cross-Bred cow/calf operation. Bud was very active in his local farming community. He served with his daughter on the Lincoln County soil conservation board and was involved in the Lincoln County Cattleman’s Association. As a farmer, Bud received the 2018 Farmer of the Year Award presented by the Lincoln County Chamber of Commerce, the Master Conservationist Award presented by the Lincoln County Conservation District, and the Lincoln County Conservation District Appreciation Award. All of Bud’s hard work and personal achievements were driven by his desire to make a better life for his family and those around him. Bud’s family describes him by the following words: selfless, determined, inspiring, supportive, loyal, unwavering, father, husband, grandfather, uncle, heroic, role model, organized, wise, intelligent, funny, charming, jokester, active, hard worker, tough (as a pine knot), loving, religious, spiritual, provider, generous, cattleman, nourisher, animal lover, and gentleman.