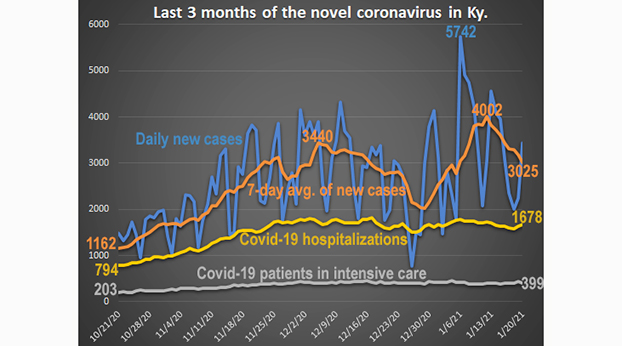 January is on track to be Kentucky’s deadliest month

Gov. Andy Beshear and his health commissioner have long said Covid-19 deaths are a lagging indicator of cases, and Wednesday’s report of 49 more deaths, the fourth-highest on one day, is certainly an indication of that.

Of the 49 deaths reported Wednesday, 42 were confirmed and seven were probable. That brings the state’s death toll to 3,243. A better indicator of this measure are the averages, since Covid-19 deaths are reported many days after they occur.

The averages tell a similar story; over the last seven days, the state has averaged 36 deaths per day, and the 14-day average is 31.2, both records.

Beshear chose to focus on the positive, noting that at 11.29 percent, this is the fifth day in a row that the share of Kentuckians testing positive for the virus over the last seven days has stayed below 12%.

“While there is still so much pain and darkness in our commonwealth due to this pandemic, we are beginning to see the light ahead of us,” he said in a release. “This plateauing positivity rate is great news for Kentucky, especially as we continue to bring more of these life-saving vaccines to our people each week.”

That was also a Wednesday; on the intervening Wednesday, there were 4,560 new cases.

The daily vaccine report shows the state has received 444,325 doses and has administered 232,127, but only 39,361 in long-term-care facilities, where shots are being given by CVS Health and Walgreens under a federal contract.

Kentucky hospitals reported 1,678 Covid-19 patients, just below the 14-day average of 1,681. Of those, 399 are in intensive care, a little below the recent weekly, bi-weekly and monthly averages, and 205 are on ventilators, a number that has remained fairly flat for several days.

Two hospital readiness regions are using more than 80% of bed capacity in their intensive-care units: the east region, 89%; and Lake Cumberland, 98%. The northern region is using 80.2% of its overall capacity.