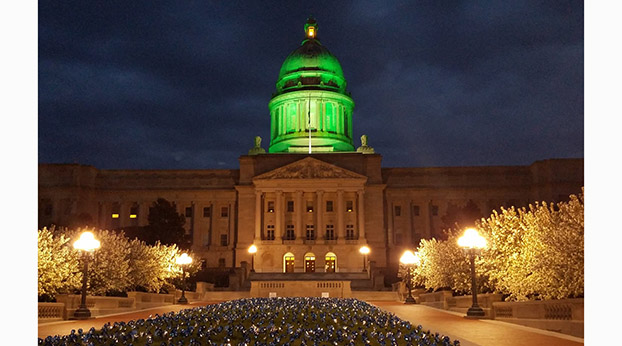 Kentucky saw its highest daily number of deaths due to COVID-19 with 58, Gov. Andy Beshear reported during a briefing on Thursday.

“This is because we have had so many cases recently,” he said.  “As we saw that exponential growth that we’ve been able to stop, as we’ve seen the post-holiday bump, today 58 Kentucky families are going to be struggling, and we’re going to need to be there for them.”

This brings Kentucky’s pandemic total to 3,301.

As a result, Gov. Beshear announced, “Friday we are going to be memorializing those individuals, in a ceremony where we’ll place an American flag on our grounds here at the Capitol, for every single individual we’ve lost.  And as we move forward, we’re going to keep doing that.  These are all children of God, loved by their families, needed by their community, and deeply, deeply missed.”

He also noted that there is a wreath lit green on the front of the Capitol to honor the victims.

A total of 3,728 new cases of the coronavirus were reported to state public health officials on Thursday, making it 338,034 since the first case was reported in Kentucky on March 6.

“It sounds like a lot. It is a lot.  We need fewer cases,” Beshear said.  “But it’s also the lowest total for a Thursday in over four weeks.  It does appear that compared to the week that had our highest total, about two weeks ago, we are seeing a decline from that week.  We are still at a level higher than we should be, but all of us that are working on this are glad to see the numbers are coming down.”

A total of 1,604 Kentuckians are hospitalized due to COVID-19. Of them, 395 are in the ICU and 209 are on a ventilator.  Only the latter number is an increase from Wednesday.

To view the full daily COVID-19 report for Kentucky, which includes such information as the red zone counties and red zone recommendations, testing locations, the weekly White House Coronavirus Task Force reports for Kentucky, executive orders, vaccine distribution, and other information on the state’s pandemic response go to kycovid19.ky.gov.

This was Gov. Beshear’s last scheduled live press briefing this week, although his office will be sending out daily reports on the coronavirus numbers throughout the weekend.  His next briefing will be Monday afternoon at 4.