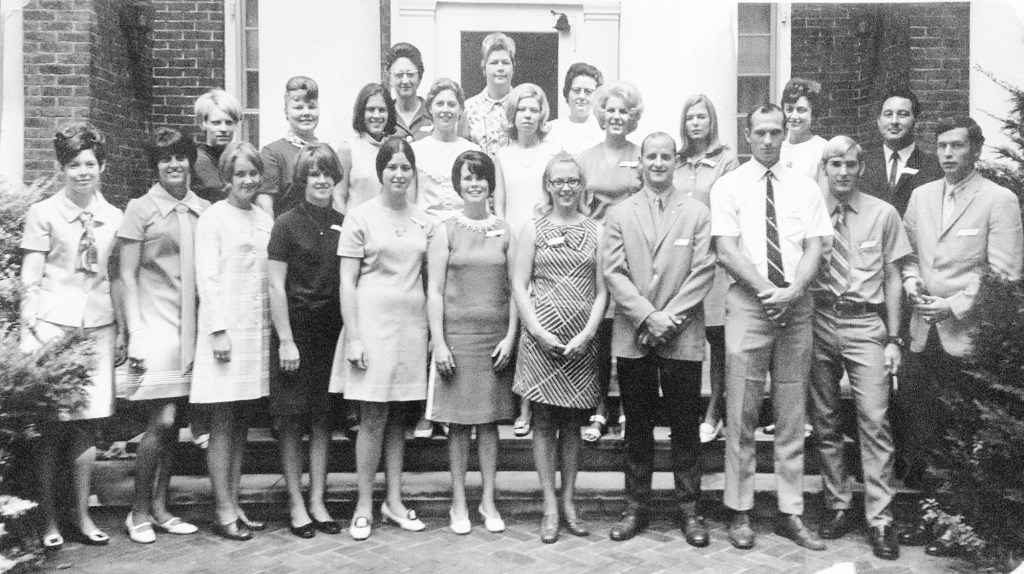 David Davis, first row, second from the right, was one of the new teachers in the Danville School District in 1970. Photo from Advocate-Messenger archieves

(This is the first part of a two-part article about a former Danville city school teacher, coach, principal and administrator. The second part will appear in the following week.)

David Davis, a former middle school teacher, enjoyed his 27½ years while working with students and administrative personnel in the Danville city schools. He spent most of his time at Bate Middle School.

“Schools should be all about helping students achieve to their highest level; it is all about the students,” he said.

He began his teaching career in 1970 at Bate Middle School where he taught social studies and was a basketball coach and ended it in May 2020. He also was principal, baseball coach and worked in other phases of education.

“For the first 10 years of my teaching career, I could not wait for the school year to begin, Davis said.

“I learned the names of the 150 students in my classes in three days. I touched the lives and hopefully made a difference for more than 3,000 students in Danville.

“As a teacher, I was able to touch the lives of some of the most talented and resourceful teachers, administrators and staff for 48.5 years.

Davis created a “law” unit that culminated in a mock trial to provide students insight into law and order, right and wrong, actions and consequences. Pride swells when students remember the unit and the character they played.

“Many of my students became attorneys.’’ The students also learned to fill out income tax forms in Davis’ finance unit.

“One of my favorite courses to teach was civics/citizenship as part of the classes.” He enjoyed taking students on trips to Constitution Square and Burke’s Bakery and other Kentucky history sites.

Davis graduated in 1966 from Cumberland High School and enrolled in University of Kentucky the same year. He spent the summers of 1966 and 1967 working in factories in Detroit, Michigan, while living in the inner city with friends. He said he witnessed the riots in the Motor City.

From 1968 to 1970, he worked in the library at the National Institute of Mental Health Clinical Research Center, a federal minimum security prison in Lexington. It was an experimental drug treatment and rehabilitation center on Leestown Road.

“The year I graduated in 1970 from UK, graduation ceremonies were postponed until August because of the political and social unrest that resulted in the burning of the ROTC Building on campus.

“I was offered and took a seventh grade teaching job in 1970 in the Danville Independent School District, teaching social studies and coaching basketball. “

He completed his education at Eastern Kentucky University with a Master of Arts degree in education-history in 1979 and took additional coursework to achieve a Rank I Teaching Certification in 1981.

“I was an energetic and successful teacher for 15 years and painted houses in the summers, on weekends and evenings.” He never had the urge to become a school administrator.

“At the mid-point of my career, I decided to try another line of work. I resigned my position as a teacher in July 1985 and was hired as an apprentice printer at R. R. Donnelley & Sons, Inc.

“The one year I spent at R. R. Donnelley changed my life.

“I enjoyed my work there, as well as the new friends I made. But I was seriously out of my element in the printing business from the lack of serious mechanical ability and the inability to see color in the product that graced magazine racks across the United States and most of the free world.

“When I resigned my teaching job in 1985, I prayed to God first. However, I had already made my decision, so I was essentially asking Him to bless my plan,” Davis said. “I should have prayed that His will and plan would be done and I would accept what He laid on my heart.

“I sacrificed and lost a lot by doing it the Frank Sinatra way and I felt duly chastised by Almighty God. But it did not end there, my whole attitude changed regarding my future.”

He returned to Bate school in 1986, and “started thinking of new and adventurous ways to teach and show the world to my students.”

He organized spring break trips for students to Washington, D.C., Philadelphia, Gettysburg and Amish Country with a Kentucky Department of Education grant. 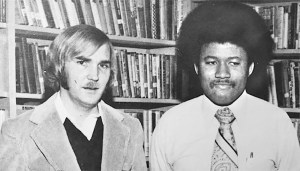 Davis and other Bate school teachers also participated in the creation and implementation of a Shaker study unit at Bate, with links and student activities related to language arts, mathematics, science, social studies, art, and home economics.

He participated in a Summer World History Seminar for two weeks at Centre College to gain additional exposure to content he would be teaching in his world history class at Bate.

To obtain additional education requirements for principal and other district administrative positions, Davis earned a master of arts degree in education-history in 1979 and did coursework to earn a Rank I teaching certification graduated from Eastern Kentucky University in 1981.

He returned to the Bate school as social studies teacher and girls’ basketball coach and continued working for Danville schools for another 27.5 years.

At the beginning of the 1991-92 school year, he divided his time between assistant principal and seventh grade social studies teacher.

After the Christmas break, he became the full-time assistant principal and was the primary administrator at the middle school.