Friends of the Library to host virtual Kentucky Chautauqua presentation

The Friends of the Library (FOTL) will begin their 2021 programming with a virtual Annual Meeting & Kentucky Chautauqua performance on Thursday, Jan. 28, at 6:30 p.m. via Zoom. This is the first year the event will be held virtually.

Those interested in attending will need to email friends@boylepublib.org in advance to receive a meeting link. 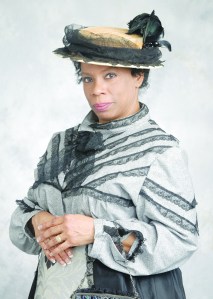 The Kentucky Chautauqua presentation hosted by the Boyle County Public Library will feature a performance by Debra Faulk portraying Nancy Green in “Being Aunt Jemima, the Pancake Queen.”

The Kentucky Chautauqua presentation will feature a performance by Debra Faulk portraying Nancy Green in “Being Aunt Jemima, the Pancake Queen.” The virtual performance will be preceded by a brief annual meeting of the Friends of the Library. This event is free and open to the public.

Typically FOTL hosts 8-10 programs each year, but COVID-19 changed what they could offer in terms of programs. “We’re thrilled to be able to offer our first virtual program after nearly a year without programming,” said Sallie Bright, president of the local Friends of the Library. She explained that they are also hoping to offer additional virtual programs in the near future. Information about upcoming Friends events will be listed on the library’s website, BoylePubLib.org.

Nancy Green became one of the first prosperous African American women in the U.S.

Green was born enslaved in Montgomery County, Kentucky, in 1834. While in Kentucky she worked for the Walker family and moved with them to Chicago just after the Great Fire, in 1872.

Eight years later, Nancy Green became “Aunt Jemima.” Businessman R.T. Davis had purchased a pre-mixed, self-rising recipe for pancakes and wanted an “Aunt Jemima,” a character from minstrel shows which were popular at the time, to be the face of his pancakes. “Aunt Jemima” would be a friendly, animated, African American cook who served a wealthy white family.

Playing the role of “Aunt Jemima” gave Green financial independence few African Americans and few women experienced at the time. She used her wealth as a means to empower her community.

She was particularly active in her church, leading missionary trips, investing in anti-poverty programs for African Americans, and advocating for equal rights. Though her work depended on a derogatory racial stereotype, her financial success demonstrates how black Americans could sometimes play on and use such images to their advantage.

Kentucky Chautauqua is an exclusive presentation of Kentucky Humanities with support from the National Endowment for the Humanities and from: Christina Lee Brown, the Carson-Myre Charitable Foundation, the Cralle Foundation, Farmers State Bank, the Honorable Order of Kentucky Colonels, PNC, the R.C. Durr Foundation, and Judy Rhoads.

For information about Kentucky Chautauqua or Kentucky Humanities, visit www.kyhumanities.org or call 859-257-5932.