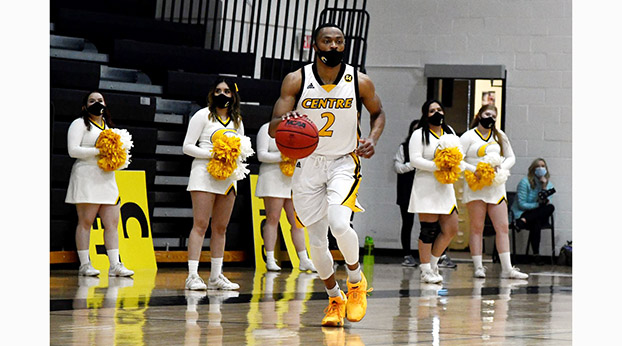 After totaling 21 points in Saturday’s victory, Williams poured in 27 Sunday while converting a 6-for-8 clip from beyond the arc. For the weekend, the Lexington, Ky., native hit 12 of 15 (80%) from 3-point range.

Trailing early in the second half, the Colonels used a lengthy 16-0 run to help turn the tide, improving to 2-2 overall with the win while dropping the Southern Athletic Association rival Lynx to 0-4.

Highlights
– Williams and rookie Gage Wells came out on fire, combining to go 6 of 6 (three apiece) from distance as the Colonels clung to a 21-18 advantage.
– Despite shooting 60% (15-25) as a team in the first half, Centre’s lead at the break was just 40-39 over Rhodes. The visiting Lynx out-rebounded the Colonels 18-11 in the opening period, including 10 offensive boards resulting in 17 points.
Wells 3s, 11-8
– Rhodes began the second half on a tear, using a 10-2 run to take its biggest lead of the game, 49-42, less than four minutes into the frame.
– Centre responded in a big way, however, reeling off a 16-0 run across a six-minute stretch that changed the landscape of the contest. Williams and Wells each connected on 3-pointers during the run, which was capped by a driving layup from Dawson Crump.
– The Lynx refused to roll over, pulling within three points, 71-68, with three minutes on the clock.
– Williams drained a 3-pointer with 90 seconds on the clock to double that advantage, and Rhodes wouldn’t get any closer.

Inside the box score
– Crump filled the box score with 14 points, seven assists, five rebounds and a steal while hitting 6 of 8 from the charity stripe.
– RJ Smith turned in a double-double on 11 points and a career-high 10 rebounds, and Wells finished with 15 points on a 5-for-6 outing from 3-point land.
– Pete Knochelmann finished in double figures for the second straight game, tallying 10 points after yesterday’s personal-best 12.
– Chez Moore hauled in six rebounds, second on the team to Smith, including five in the second half as Centre improved on the glass.
– As a team, the Colonels shot 53% (24-45) overall and 61% (11-18) from long range – both easily season highs.
– Centre connected on 21 free throws compared to Rhodes’ seven.

Up next
Centre hits the road to take on Millsaps, beginning Jan. 29 at 7 p.m.