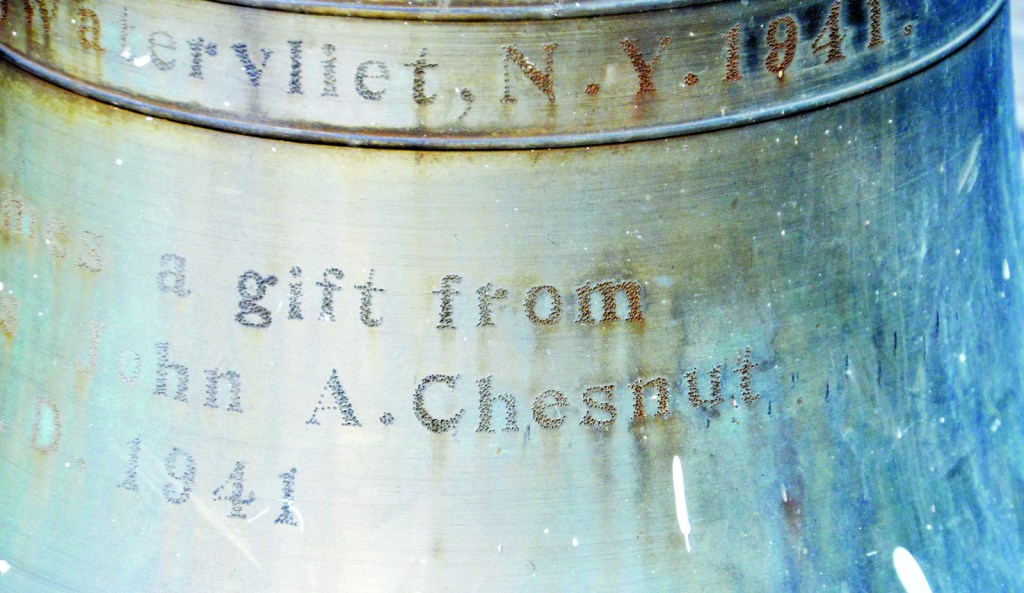 When the 11 bronze bells were carefully dismantled from the bell tower at Lexington Avenue Baptist Church last July, an inscription noted that they were a gift from Mr. and Mrs. John A. Chesnut in 1941. (File photo by Robin Hart)

In the story titled “Restoring history: Church hopes bells will help community celebrate after the pandemic” that was published earlier this week, the location of another carillon made in part by the Meneely Foundry before it closed in 1948 was wrong. The location is at Baker Park in Frederick, Maryland and is called the Joseph D. Baker Tower and Carillon. 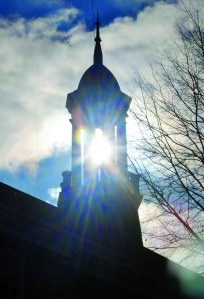 The sun shines through the empty bell tower at Lexington Avenue Baptist Church. The bells were removed last summer for repair and maintenance and the church is now hoping the community wants to help support the project. (Photo by Robin Hart)

“Our goal is October so that maybe by then the pandemic will be over and we can have a big celebration and ring the bells out because they’re heard all over town,” said Beverly Durham who has been a member of the church for over 60 years and is co-chair of the Bell Chimes Restoration Committee.

Last summer a support collapsed in the tower and one of the smaller bells, which weighs more than 65 pounds, fell and was wedged between another bell and the wall, Durham said. If a heavier bell — the heaviest weighing 700 pounds — had fallen, the entire collection of chimes would have crashed through the ceiling of the sanctuary, Durham said.

So now the restoration committee is ramping up their efforts to raise $55,000 for the restoration of the tower’s stationary steel frame and maintenance on the bells. Durham said they had raised $18,000 when the project began in July, and “that was just by word of mouth.” Now, the committee is formally asking for donations, not just from the church’s congregation, but also from folks who have a special place in their heart for LABC, she added.

Durham said even though some church members have moved out of the community, and even joined other local churches, “they still love this church.”

“We’re not trying to take away other churches’ members. We’re trying to restore what we consider an historic community feature,” Durham said.

And some residents may like to help restore the bells because they have fond memories of celebrations when the bells tolled, she added.

“The bells have been a part of our community for a long time. We miss them.”

After workers carefully dismantled the bells in July and took them to The Verdin Company in Cincinnati, who is working on the project, an inspection found that they, “are as perfect now as they were the day they were installed …” according to a report from the business. 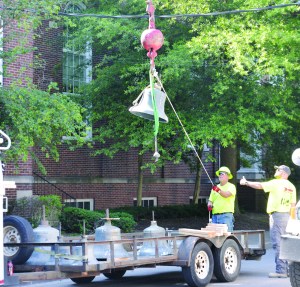 Employees of the Verdin Company guide a bell down toward the flat bed trailer after it was disconnected from the bell tower at Lexington Avenue Baptist Church in July. (File photo by Robin Hart)

The biggest problem was that the cast iron plates that had been hot riveted to the bells so they could be attached in the bell tower on a stationary steel frame had cracked and some large pieces of the plate in one of the bells were missing. “This will eventually lead to the bells becoming unstable and becoming loose on the beam,” the report stated.

It went on to say that the bells were found to have no chips or cracks around the rim which is fairly common with older bells.” The inspector also wrote that the sound quality for many of the bells “would be considered high quality, even by modern tuning standards.”

The bell chimes were a gift in 1941 from John A. Chesnut, who was one of the owners of Chesnut-Salter-Best Hardware Store in Danville.

They were cast and installed by the Old Meneely Bell Foundry of Watervliet, New York. Electric strikers ring the bells and are controlled from a computer which can be programed to play the bells at any time.

The bells at LABC “is a fairly significant instrument,” according to the Verdin report. The Meneely Foundry only cast two more chimes in 1948 after LABC’s, and only one of them still exists, which makes LABC’s chimes the second to last ones made by this foundry before it went out of business.

The other location of the Meneely Foundry bells is at Baker Park in Frederick, Maryland and is called the Joseph D. Baker Tower and Carillon. 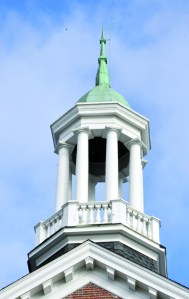 The bell tower on top of Lexington Avenue Baptist Church still stands empty. The bells were removed last summer for repair and maintenance and the church is now hoping the community wants to help support the project. (Photo by Robin Hart)