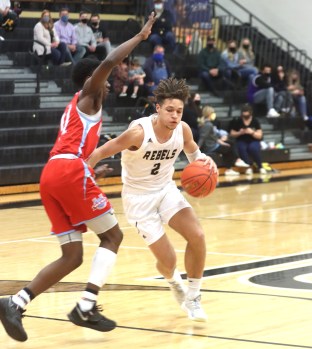 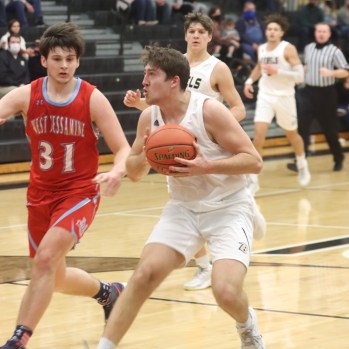 Jagger Gillis of Boyle County goes to the basket against West Jessamine’s Daniel Waters during the second quarter Tuesday. - Photo by Mike Marsee 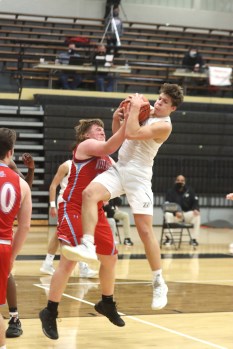 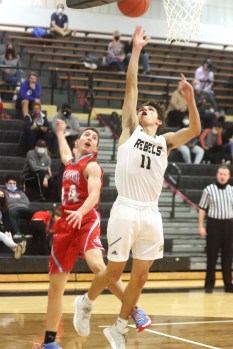 William Carr of Boyle County gets past West Jessamine’s Brett Bush for a layup during the second quarter Tuesday. - Photo by Mike Marsee 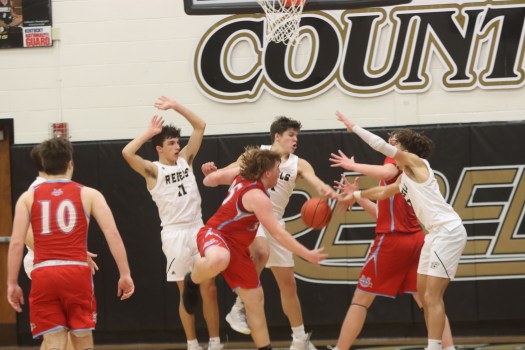 Boyle County has been thrown a few curveballs in the early weeks of this season, but the Rebels’ batting average couldn’t be any better.

The Boyle boys have won every time out to date, and they have posted some impressive victories along the way. Most recently, they fought off defending 12th Region champion West Jessamine for a 56-53 win Tuesday night.

This was the second straight game that has gone down to the wire, and the third straight win for the Rebels without their coach and one of their top players.

In fact, Boyle (6-0) hasn’t had its full roster for a full game yet this season. And it started its season later than almost every other team in the region.

Still, the wins keep coming. And in the case of Boyle’s two most recent games, victory came even when it might look like the day might end in defeat.

“I think they’ll help us grow,” guard Luke Imfeld said. “Good teams find a way to win the games that sometimes they shouldn’t. We grinded both games out, and now we’re 6-0.”

West Jessamine was picked by many in the preseason to repeat as regional champion, but the host Rebels outlasted the Colts after seeing a nine-point lead cut to one in the fourth quarter.

“These are the kind of games that you play in postseason, and to play them this early and have success with them, that really helps us,” acting head coach Darryl Adams said. “This one and Saturday’s, they both had that feel about them.”

Adams and the other Boyle coaches have picked up the slack in the absence of head coach Dennie Webb, who has missed the last three games while first in quarantine and later in isolation after testing positive for COVID-19.

Boyle is also without guard Cruise Wilson, who suffered an ankle injury in the Jan. 11 season-opening win over Spencer County and hasn’t played since.

Adams said the Rebels hope both players and Dennie Webb will be able to return next week, putting the team at full strength for the first time this season.

Boyle held off West Jessamine (4-4) on Tuesday despite going without a field goal for the final 5:15. The Colts outscored the Rebels 10-4 during that span, but they didn’t get a field goal in the final 3:11.

Boyle had seen a nine-point lead evaporate in the first half, and the Rebels led by the same margin at 52-43 when Jakei Tarter got their last basket with 5:16 to play.

West Jessamine rolled off eight straight points over the next 2:20 to pull within one, and the Rebels sent the Colts to the free throw line twice during that stretch and five times in the final 5:35.

West Jessamine’s Daniel Waters got free for a 3-point shot from the right side that would have tied the game, but it was off target.

“We knew we were going to be in for a battle, and the kids fought hard and did what they needed to do at the end to win the game,” Adams said.

Imfeld led Boyle with 22 points, and he is one of the top scorers in the 12th Region at 23.7 points per game. Sheperson scored 12 points and had six blocked shots, William Carr added 10 points, Tarter had a game-high 10 rebounds and Jagger Gillis had a game-high six steals.

Boyle hasn’t reached the regional tournament since 2018, and the Rebels’ season ended last year with a two-point loss to Danville in the 45th District semifinals.

Imfeld said he believes Boyle is a better team this season.

“We’re trusting each other. We’re more hungry,” he said. “Last year’s dist loss left a bad taste in our mouth.”

Adams said he thinks the Rebels are better as a team and better individually with the growth of players such as Imfeld, Webb and Sheperson, the emergence of players such as Tarter and Carr and the addition of Gillis, who quarterbacked the Boyle football team to the Class 4A championship after transferring from Anderson County.

“We’ve got a lot of confidence in games that last year we didn’t have,” Adams said.

Only two 12th Region boys teams — Garrard County and Wayne County — started the season later than the Rebels after the school postponed two games scheduled for the first week of the already delayed season due to a spike in COVID-19 cases in the county.

However, Adams said that wasn’t such a bad thing. As scheduled, the Rebels’ Jan. 15 opener would have come only 18 days after the football team won its title, and as usual there are a handful of players on both teams’ rosters.

“We hated to miss that first week, but that gave us another week with our football guys,” Adams said. “In the long run, it’s helped us get better as a team.”

“Other than him being here leading us, it’s just status quo,” Adams said. “We do the same thing every day. We just keep working.”

He said Dennie Webb is missed, however, calling him “the most important piece of the team.”

“Our job right now is to hand it back to him where he gave it to us, and we’re just hoping we don’t screw it up,” Adams said.

Temporary home: Boyle hosts another of the 12th Region’s top teams, Somerset, on Saturday, but the game won’t be on the Rebels’ home floor.

The game was added to the schedule after Boyle had scheduled an archery competition in its gymnasium, so the Rebels and Briar Jumpers will play in the new Boyle County Middle School gym.

“We’ve never even played there or even shot there,” Adams said. “We’re trying to get there and at least shoot so it’s not like a neutral site game.”

Imfeld said he and his teammates haven’t even been inside the school, which opened last fall.

“I guess it’ll just be like a road game for both of us, but whatever gym I’m playing in, hopefully I’ll play my game,” he said.

The BCMS gym has a regulation court, but seating and space around the sidelines and baselines is extremely limited.

Adams said it’s only one of the recent scheduling conflicts for the Rebels, though the others haven’t involved games.

“We’re having to find places to practice,” he said.

The Boyle girls put together back-to-back wins for the first time this season when they edged Madison Central 38-34 on Monday at home. Ella Coffey scored a game-high 14 points for the Lady Rebels.