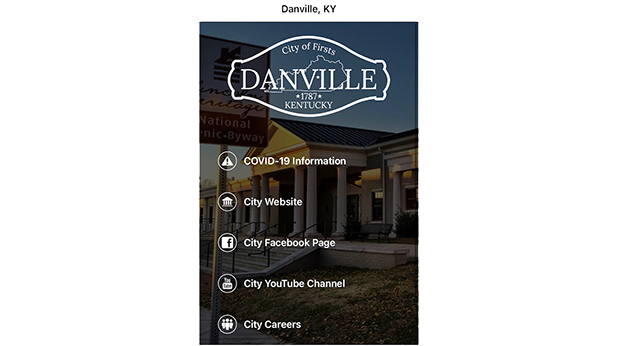 Over the weekend, the city of Danville launched an app citizens can use to submit concerns and requests to city staff.

The free app, “Danville KY,” is available for both iOS and Android devices on the Apple App Store and Google Play. There are various categories of requests that can be submitted, under city administration, codes enforcement, the fire department, and public works, including but not limited to: open records requests, abandoned vehicles, issues with grass, weeds and trees, CPR training, potholes, and road debris issues. The app uses phone cameras and GPS and location services to allow city staff to see where the issues are and what the requests involve.

City IT Director Nick Warren said the city worked with a provider that developed the app on the city’s behalf. The app took about six months to develop, which he said he is excited about “Giving citizens a system to not only report requests, but allowing them to see other requests that are happening throughout the city.”

“The more information we can provide citizens, the better,” he said in an email.

It is intended to be a public system, so people will see the requests of others as long as they are not a restricted category, such as under the insurance claim category, which is kept private. Warren said personal contact information provided to the app, such as email addresses and phone numbers, are also not made public. Only the name of the person making the request is made public, and requests can be made anonymously if desired.

The app also allows citizens to see the status of a request, such as if it is open, acknowledged, or closed. Warren said there are designated staff members in each city department who will be responsible for managing requests for their individual departments.

“The comments feature built allows the public to directly communicate with staff regarding the request they have sent,” he said.

He said there are three current methods for submitting requests into the system: the smartphone app, the city website under “service request” or, if a citizen is not comfortable using an app or website, they can call City Hall at 859-238-1200, and a call taker will submit a request on their behalf.

Warren said the app will also be set up so citizens can receive notices from the city to keep them informed.

“We hope this will foster better communication between citizens and staff to resolve issues in a timely manner,” Warren said.